Summer Trips To Martin"S - a Memory of Wokingham.

My sister Pauline and I used to come here with our mother, and sometimes father, on hot summer days, around 1948 to 1952 (age 6 to 10). We commuted three stops from Reading South in electric trains. I basically learned the transition from swimming a width under water to the same on the surface. Great bonding with my father since my mother was not a swimmer. We used to picnic though I believe there was some food available (lemonade? ice cream?). The changing rooms were the usual slightly slimy floor dark damp places. There was a smaller, shallow "kiddie pool" beyond the other end of this photo. We were told the pool had been a private club before WW2 for the use of actors and performers who lived in this area west of London. We therefore felt, at this young age , that the place was rather glamorous. As the sun went down, we would trudge back to the station to wait for the next train home.

Is there still a pool here? I would like, at some point, to commute one last time from my current home outside Philadelphia, USA!

Tue Nov 11th 2014, at 9:31 pm
Josie Llewelyn commented:
The Pool was in use and hugely popular until 1992. The Council had decided that despite huge public outcry, with even Prince Philip and Denis Thatcher on their side, despite the popularity, Martins Pool was dubbed by the council “sub-standard” in size, inferior in quality in todays terms. It was only usable in the summer months and had inadequate parking. 1992 had seen the poorest attendance ever. It was decided that 1992 would be Martins Pool last summer. It is now a housing estate.
Add your comment
Report abuse 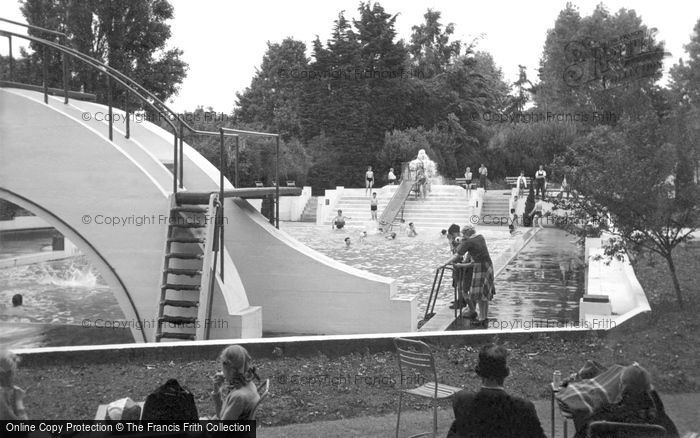