That Old Shoe Shop - a Memory of Wokingham.

The old shoe shop was called "Caiger's Boot Store" and was run by my two elderly great aunts, Ruth & Kizz (Kezia) untill 1969. Their father, Frederick Caiger who married the previous owner's daughter, owned and ran the shop before them from around 1870.

I can remember in the mid 1960s visiting my Great Aunts every Saturday morning with my parents, even the shoes seemed old fashioned but my cousins and I all had to have shoes from the shop for school. There was a backroom behind the shop of which Hinge & Bracket would have been proud and& what seemed to me at 6 or 7 years old to be a long dark passage leading to a scullery and kitchen where I had to pass a large old larder cupboard with the holes in the top half of the door in order to get to the loo, this was always an ordeal as I was convinced this larder was a Dalek!

Out the back there was a fairly large yard with outbuildings and stables that may have been used for Wokingham Fire Brigade's horses,and also might give a clue to the shop's previous use as a sadler's.

How sad that in the late 1960s - early 1970s our shoe shop along with a whole row of buildings on the opposite side of Peach Street going up into the Market Place were allowed to be demolished to be replaced by the concrete monstrosities we have now. 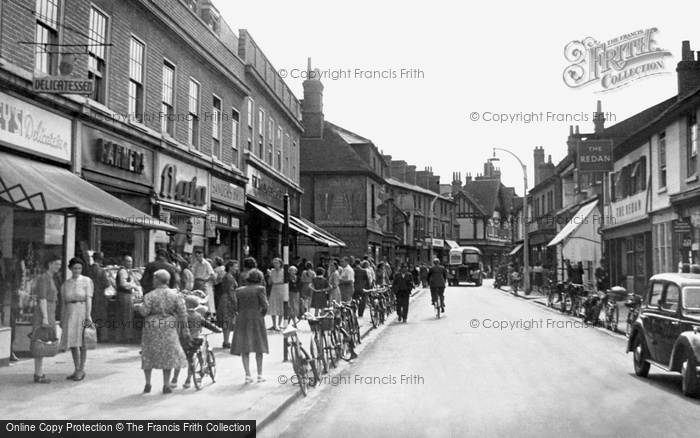