I too new Mr Wernink from the bridge mission, after a dip with my friend Evelin in the Hollow Ponds, I was attending a scout meeting at Snakes Lane when I experienced the most horrendous back pain which was diagnosed as Infantile paralysis, now known as Polio. When I came out of Waltham Abbey Isolation Hospital complete with body irons, Mr Wernink organised rehabilitation accommodation for me in Harwich which lasted a couple of months. The very basic accommodation was with a fantastic family named Davies who gave me no pity which at the time I thought was horrible and cruel, but in hindsight was very very good as it made me resolve to get better without them. We kept in touch for several years, but as I recovered and they got older we lost touch. I am now 77 years old and partially disabled through a stroke, I live in Suffolk alone so unfortunately have too many hours to reminisce . I would love be in touch with someone of a similar era. Alan.

Thu Feb 9th 2017, at 12:13 pm
larrycollins59.lc commented:
There is a facebook group page all about Woodford Bridge, you would be welcomed to join it to share your memories...Please visit https://www.facebook.com/groups/718448588211662/
Add your comment
Report abuse
Sat Apr 16th 2016, at 2:59 pm
Alan Friston commented:
Hello Frank Bedford, I do just about remover you. The Bridge Mission was at the top of the village quite near the police station, the hall in Canfield Road used to great fun and very interesting, met my first girlfriend there. Did you have an older brother in the navy?
Add your comment
Report abuse
Sat Apr 16th 2016, at 2:13 pm
Sue Terry commented:
My mum was a wonderful pianist who could play both popular and classical tunes. She filled our house with beautiful music and we would all sing around the piano sometimes in preference to the telly. This is with great thanks to Mr Wernick who recognised her talent and taught my mum to play the piano as she was one of the children who attended his Sunday School "The Jolly Old Mish" as she called it.
Add your comment
Report abuse
Thu Mar 17th 2016, at 11:05 am
norbet commented:
Hi Frank, just found your response, I lived in the Bridge from birth in 1934 and lived in the High Road in the estates agents see in the picture next door to the Hamlets Chemist (who were my God Parents) until I married in 1955 and moved to Gains Hill Road until moving to Harlow new town in '57. I now live in Kent.

I knew a Cecil Bedford in the Bridge also, Dicky Mason, Peter Watkins and quite a few of the Dr. Bernardo boys, we all went to Ray Lodge in Snakes Lane where Mr. Moss was the head and later to St. Barnabas where strict but fair, Colonel Branston was Head

The mission run by Mr. Wernick had nothing to do with Canfield Hall, that was run by a Dr. Smith. I went to the mission a couple of times but my main Sunday School was at Canfield Road.

My Father worked for London General later to become London Transport and as a matter of interest, if you go into the Memories of EPPING page you will see a photo of the High Street in which there is a No.10a bus of exactly the type in which my Father learned to drive, in fact that could even be the very bus, have a read of it'd destination board and you'll see the journey it made with passengers sat on wooden seats, was far greater than London buses do today.

The mission you mention was that the one in CANFIELD ROAD, I use to go there also. I remember so well the magic lantern shows on Sunday afternoons, and the little stamp like stickers you were given for attending..
Add your comment
Report abuse
Sat Jan 30th 2016, at 12:23 pm
norbet commented:
Hi Alan & Yvonne, I too attended Sunday school at "The Mission" I also had polio and was admitted to Guys hospital in London as did my friend Kenny Tyler but it was assumed that we got it from the Lido swimming pool at Whips Cross. I recovered well enough to go into the army but Kenny unfortunately was left paralysed from the waste down BUT married a smashing girl and has a family. Norman
Add your comment
Report abuse
Wed Jan 13th 2016, at 5:03 pm
shrimpton491 commented:
Mr. Wernink was a great man who`s daughter was a missionary in the then Belgian Congo. I went to Sunday school at the Bridge Mission and the GLB, where we had some very good leaders. They even clubbed together to pay for me to go to camp, all without my knowledge.
Yvonne Smith
Add your comment
Report abuse 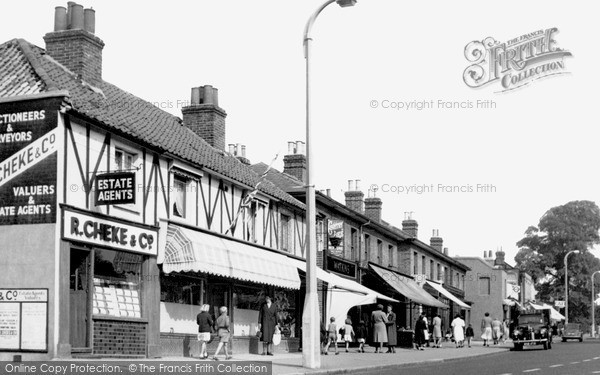