The Bridge 40+ Years Of Memories - a Memory of Woodford Bridge.

'Mum, did you catch fish in the pond at the Bridge' asked my son when Googling for ponds to fish. 0f course we did, with our home made nets of a piece of material attached to a stick, carrying home the sticklbacks and frogs spawn in a jam jar with its handle of string.
Reading the memories days later. Names were familiar, but as most where dated awhile ago, I didn't like to make contact in case they had passed away, but going back occasionally to reread them, Colin King wrote in 2012, I immediately contacted him, we knew each other back in late 1940s.
I was Pat Tewksbury when Mum, Dad and I moved to 8 Highfield Road, June 1937, into one of the four houses that Dad helped to build. I married at St. Paul's, June 1957.
We bought our own house at South Woodford, backing onto the fields at Charlie Brown's Roundabout. When plans for the M11 to be built at the bottom of our garden were published, we moved to Wickford. Dad continued living at No 8 until 1977, when he moved to Scotland.
My first recollection was of Dad and I going to the allotments at the bottom of Crownhill Road, and crossing over to Drapers' Farm to collect a pint of milk to have with our bacon sandwiches.
1939 came and as there was no school to attend, we had lessons in Mrs Marriotts house in Highfield Road. I wonder where her daughter Doreen is now?
Mums health wasn't very good, and as an only child, and Dad later going to North Africa with the 8th Army, I did a fair amount of the shopping. So many of the store owners became very familiar to me. No supermarkets in those days.
Holtons the butchers. I remember Mr Holton with his long white overall, sometimes wearing a straw boater. Pigs were slaughtered in the back yead, and if you happened to be around you would hear them squealing. The finest port sausages ever. Next door was Frank and Mrs Martin's fish shop. After the war the families became friends. Dad, doing work in the shop, came across an inglenook fire. I cannot remember if it was dismantled or bricked up. The walls of the shop were horse hair, straw and lime. The shop sold wet fish and only frying on a Friday. I have in my greenhouse a zinc tray that contained those wiggling eels!!!
Grant's the gocers next door. The owner wearing a brown overall. Then the Village Rest.
Past Dr Barnados, now a hotel, Guide Dogs for the Blind Training Centre and a housing estate. Another tea shop opposite the pond. Thankfully the church remains, even if it has to have its windows covered with wire. The Crooked Billet Pub. Rackhams Bakery who delivered fresh bread daily.
The last shop on the High Road was Vaughans' the butchers. Mr Vaughan once again with a long white overall and straw boater. There are no characters nowadays to remember when you go shopping.
Grants the ladies dress shop. Too expensive for Mum to buy from. Gunton's bicycle shop. Mrs Gunton a widow married Mr Wedd a neighbour of ours. Later they moved to Benfleet. I met them one day in Southend. My husband, children and I visited them often. 0ne morning I said 'we are going to the Wedd's tonight' Mr Wedd opened the door to tell us Mrs Wedd had passed away suddenly, and he had receieved a letter to say there was a place for him as a Chelsea Pensioner. Mr Wedd had shapnel in his lung from WW1. I later saw him on a 'Songs of Praise' Rememberance Programme. Sadly he passed away the following year. Mrs Wedd/Gunton is buried with her first husband in St Pauls Churchyard. I reminisce with Margaret, who still lives at the Bridge of Mrs Wedds' original chocolate cup cakes, filled with sherry flavoured sponge and topped with real cream.
Day's, the greengrocer. Watkins the newsagent. The Bridge Pharmacy, owners Mr and Mrs Hamlet, lived in Gaynes Hill Road, in what was the middle one of three houses between Roding Lane and Highfield Road.
There was a small alley between the shops. My friend, Iris lived in one of the cottages, later becoming a neighbour of a very dear friend at Rochford.
Next to the White Hart Pub was a smaller one The Fox and Hounds, and the village blacksmith beneath the large oak tree. And of course the oak trees at the bottom of the hill on the green. Always very muddy.
There was a lovely smell of ham etc in Taylors Grocers, the glass top tins which contained loose biscuits. Mr Taylor patting and shaping your ounce or so of butter before wrapping it, when you handed over your ration book.
The mens' barbers on the corner of Gainsborough Road, later became a GP's surgery.
Parrys Toy Shop. The garage on the corner of Waltham Road is still a garage. The opposite corner was WC French the builders. Mrs and Mrs Robert's wet and fried fish shop.
A haberdashery shop. Gents clothing shop. Haven sweet shop and of course Bankils, who can forget those lovely white haired gents in their brown overalls.
Moore's newsagent, neighbours of ours. Foster's greengrocers. The Ashton Playing Field where Mr and Mrs Smith from Canfield Road held their dancing classes.
The floods before 1945, when Greaves the village coal merchant lent his coal lorries to get us to Snakes Lane School. We went to school in those days regardless of the weather, bombs, Doodle Bugs and Rockets.

Thu Feb 9th 2017, at 12:49 pm
larrycollins59.lc commented:
There is a facebook group page all about Woodford Bridge, you would be welcomed to join it to share your memories...Please visit https://www.facebook.com/groups/718448588211662/
Add your comment
Report abuse
Sun Jun 26th 2016, at 10:02 pm
norbet commented:
Hello again Pat, do you still get on this site? If so did your friend Iris have the Surname of STAINS as a Brian Stains who lived in one of the four cottages down the ally has lost touch with his sister, he now lives in Spain. I knew all the families living in those cottages and apart from Mr. & Mrs Stains, the only other family with children were the Walledges who had Daughters Velma, Margaret, Irene and Rita plus a Son Jimmy, but they didn't have an Iris that I know of.
Hope you reply..........................Norman
Add your comment
Report abuse
Mon Feb 1st 2016, at 6:11 pm
norbet commented:
Lovely memories Pat. The chemist owners Mr. & Mrs. Hamlet were my God parents, I lived next door in R. Cheeke & Co. estate agents that my Mother ran from 1922 until 1956 or 7. Rodger was right in saying that Mr. Parry only sold sweets and that Philips was the toy shop next to the barbers owned by Rodger Taylor and it was Jenners on the corner of Waltham road. Did you know that Jenners made phosphorous strips during the war to interfere with enemy radar when dropped from our bombers.......................Norman
Add your comment
Report abuse
Fri Aug 21st 2015, at 2:57 pm
roger4seven commented:
Fantastic to read your memries but just a couple of little slips... the builders firm on the corner of Waltham Road was Jenners... my dad Charlie Atkinson worked for them but was sacks in 1935 when he bought a new house built by another builder. The house he bought was 39 Stoneycroft Road. Old Mr. Parry was only sweets & tobacco it was Philips further down next to the hairdressers that sold toys.. do I remember right that they had a daughter what was her name ?
Add your comment
Report abuse 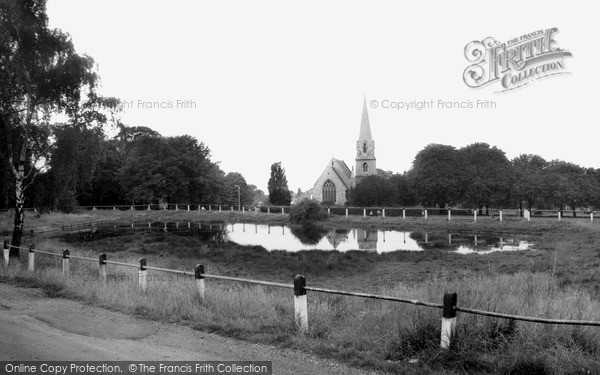