It was July/August of 1950 when I was sent here from my home town of Hanley, Stoke-on-Trent at the age of eight, to convalesce after a serious post-operative infection.
My first impressions were of a grim-looking, foreboding building, but those first, gloomy impressions were soon dispelled by the kindliness of the staff, and the camaraderie that grew between us - a group of boys and girls from toddlers to, I would guess, teenagers of 14 or so..
The matron at that time was an impressive woman in her dark blue uniform and crisp white cap; impressive not merely because of her appearance, but because of the way in which she tirelessly carried around on her shoulders a young boy of 12 or thereabouts, who, it was said, had lost the use of his legs through polio.
It was a long, sunny summer that we spent on the edge of the forest - with daily exercise in the shape of games organised by the nurses and walks in the forest attended by swarms of stinging and biting, uninvited companions. It was on one of these walks that I experienced my first wasp sting. Howls of pain and surprise from me, but soothing words and a hug and swift application of a damp blue bag to the neck from one of my favourite nurses soon stopped my sniffles. She was my first true love, but I was only eight then and sadly the intervening years have erased both her name and looks from my memory.
Memories crowd in as I think of that distant time: the piles of comics that I devoured whenever I could: the Dandy, Beano, Radio Fun, Film Fun, Sunny Stories and more: the "sun room" sessions under the huge ultra-violet lamps, with darkened goggles to protect our eyes. No mention then, or awareness even, of any possible risk of skin cancer: the dormitory balconies onto which the beds of the bed-ridden convalescents would be pushed on sunny days; the writing of the weekly letter home, with a stub of pencil and sheet of paper, trying to find an even patch on the rough-surfaced tables that stood beneath the bedroom balconies right next to the enormous prams that posed a hazard to little uns weaving in and out of them at top speed as we played "tick, you're it". I had my share of bumps from those behemoths that summer, and my share of telling-offs from disapproving nurses. I was once sent to bed in the dorm one sunny afternoon as punishment, but I soon found a stash of comics and settled down quite happily for the afternoon.
My second "punishment" came about one lunchtime. I'm sure that the food on offer was both nutritious and well-cooked, and served piping hot, but I had never had much of an appetite, and found a plateful of beef and veg. totally overwhelming. As usual I pushed my plate away after a couple of mouthfuls, but this time there was no escaping matron's beady eye - so I was made to sit there for an hour or so with my plate in front of me, on the promise of being allowed to leave if I ate just a couple of mouthfuls more. Eventually the attraction of playing outside with my new friends as opposed to sitting in front of a plate of slowly congealing gravy became too hard to resist, so I gave in, and learned to eat just enough in future to save face.
I still have a copy of our group photograph, taken on the lawn in front of the building - featuring me, centre front, with my beaming, toothless grin, wearing the ubiquitous uniform of charity-donated shorts and pullover, some much darned and mended, but always immaculately clean and fresh, and although I can no longer remember the names of all those boys and girls captured forever in that photo, their faces and the laughter and camaraderie of those four weeks in summer will be with me for ever.

Thu Oct 13th 2016, at 8:07 am
Eric Brass commented:
Hello, Christine. I also remember the Sun Room very well, especially the dark goggles that we had to wear that made us all look like aliens. To an eight year old the first time was pretty scary, but eventually I looked forward to the visits - not that they were especially needed during that hot, sunny summer of 1950. I don't remember the TV, however, only the radio and the piles of comics that I devoured daily. Like you, I really enjoyed my time there, in the country, away from my home town of smoky, industrial Stoke-on-Trent, and I can't understand the adverse comments about the staff that some people have made about their stay at Woodhouse Eaves.
Add your comment
Report abuse
Thu Oct 13th 2016, at 7:57 am
Eric Brass commented:
Hello. I may well have met Ann and her brother and sister, but I was only eight at the time and it was a very long time ago, some 66 years ago in fact. I would have known the names of most of the children of my age at the time, but I'm afraid I can't recall them now. However, I do have a photograph somewhere that was taken sometime during the 4 weeks that I was there in the summer of 1950, of all the boys and girls who were there at that time. I'm not sure of the protocol for posting photos, but I'll see if I can find it, and if allowed, I'll post it on here for others to see.

Add your comment
Report abuse
Thu Oct 13th 2016, at 2:27 am
chris.rutherford49 commented:
Hello my name at the time was Christine Bowskill and I stayed at the Woodhouse Eaves Convalescent home when. I was 6 years old my reason for being there was after having my tonsils out was very sickly, it must have been in the 1950s. I remember my Great Aunt and Uncle taking me there, my parents wasn't able to make the journey from Worksop Notts,I do remember sleeping in the Sun room it was lovely and doing basket weaving wish I could remember how to do that now, you mentioned the Matron I remember she didn't like cowboys and Indians so stopped us watching it on TV I think. So many times have I thought about my stay their remember playing ring a ring roses on the lawn I loved that but missing my Mum and Dad and Brothers so much I had to stay about 6 weeks but I am sure. It was longer
Add your comment
Report abuse
Wed Jun 8th 2016, at 7:57 pm
buntybooboo commented:
Hello, I believe you may know my mother in law Ann who went there with her brother John and sister Barbara? Their surname was Badham. Does this ring any bells?
Add your comment
Report abuse 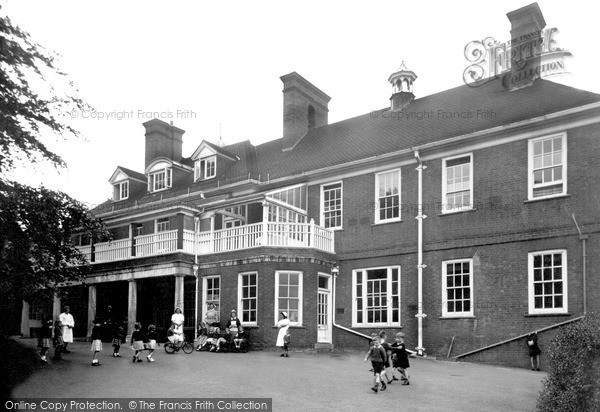