Unanswered Questions - a Memory of Woodmansterne.

I used to drink in The Woodman on occasion as I lived on the Clock House Farm Estate between 1957 and 1962 when I was married just across the road in St Peters.Question,what happened to the board with the pilots names on it that was behind a pane of glass in the public bar?.A lot of them never came back back from sorties over the South Downs & Kent .it seems to be a shame to have lost the autographs of men from Croydon ,Kenley and possibly even Biggin Hill.

Sun Apr 21st 2019, at 8:58 pm
rrbennettuk47 commented:
I think the tree you mentioned at the back of the rec opposite the pub by the swings and seesaw
was a chestnut tree we as kids used to play a game we called chessy king ball 1 person would be on the ground with a ball the others would be up the tree trying not to get hit with the ball those who did were grounded to help get the rest down by the tree had the top cut off and was flat we all tried to get up there those on ground only two could ever get the ball that high I rember Dave hewlet cought me and his boys having a crafty fag in the shelter god did my dad give me a wack for that DH was in the RAF during the last war so the name board probably went after he passed away as a very small kid I rember on sunday luchtime the pub (car) park had as many pony and traps as cars and the Turner boys used to come to the pub tie their horse up by the brick shelter then all climb on its back after a good few pints and the horse took them back to their smallholding down carshalton road
Add your comment
Report abuse
Mon May 23rd 2016, at 1:59 pm
Tony Arkell commented:
Landlords name was David.Big portly guy with a moustache as I remember.I dont remember his wife though.Looking back now I can recall that a chap I knew who had a Police record actally stole a Policemans bike from outside the Woodman.The copper left the bike under the window at the front.Alfie came out,saw the bike ,thought it would do to get him home and pinched it.How he thought he could ride it up Hatch Lane I dont know.Anyway it was found in the side of the hedge up on the Mount.Which was,incidentally about 40 or 50 yards from Alfies front door.My Father -in - Law told me the story.He was a personal friend of David.
Add your comment
Report abuse
Sat May 21st 2016, at 8:49 am
petercox195 commented:
The incident was definitely after 1959 and before 1963. I will keep looking.
Very fond memories of the Woodman as I played in the Anderson shelter in the back garden of the pub with the landlords kids (Hewlets??) and of course leant to climb trees in the park opposite the pub. The old oak tree is still there,right at the back, it was ancient then.
Add your comment
Report abuse
Fri May 20th 2016, at 8:01 pm
Tony Arkell commented:
I cant recall the incident but if it was before 1957 I was living near Wrythe Green.We moved up to Clock House Estate on 31 December 1956.If it was after that time I was still travelling back ``home`` to visit with all my school mates.Then I found the girl who was to become my wife and I didnt care what went on around me HA HA.
Add your comment
Report abuse
Fri May 20th 2016, at 6:52 pm
petercox195 commented:
Hiya
Do you remember the police box just down the road from the Woodman? As a small boy living in the shops beside the church I recall that the police box was destroyed by an explosion. Do you recall what actually happened? 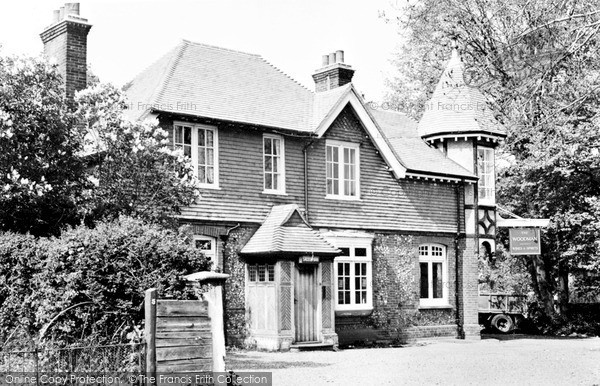