I lived in Worcester Park from when I was born (1939) until early 1956 when I joined the RAF as an apprentice. The lad in the picture (W455012) could so easily have been me (it isn't) because I was often there looking in the model shop window, as he is. Memories of Keil Kraft and Jetex and balsa wood and plastic cement.....
The picture is actually taken from the lower slopes of the ramp leading up to the station, on the left. The road dropped down behind the camera to the right, under the railway bridge which was too low to accommodate ordinary double-deckers. In the shopping parade in the distance can be seen the shop of Elliot & James, where my father bought my first bicycle, a Hercules Tourist Kestrel. A small green is on the right with the Huntsman's Hall pub just beyond. Past that was a petrol station and Toni's ice-cream parlour. Happy days!

Tue Jan 7th 2020, at 11:05 am
isgreig commented:
Between Ebbisham Road and Dorchester road was an old TB isolation hospital. Between the hospital and Ebbisham road there used to be a cricket pitch. The area of the present school and park was allotments for many years. I lived in Ebbisham road from around 1954 to 1967.
Add your comment
Report abuse
Sun May 20th 2018, at 4:00 pm
deskirton commented:
I live in Dorchester Road Worcester Park now. I heard there was a hospital where the park and Dorchester primary school Now are. Do you know if this is true?
Add your comment
Report abuse 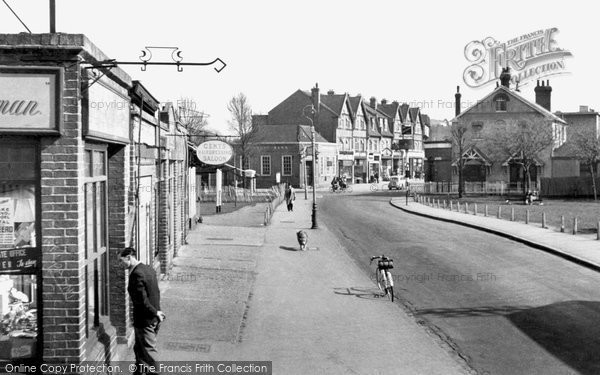 Worcester Park, from the Bridge c1955