Liquid Lunches - a Memory of Worcester.

The photo of the Crown took me back to the late '70's/early '80's. I was a young Civil Servant, & the Crown, with it's real ale, was my offices favourite haunt at lunchtime on payday. As we worked flexitime, 2 hour lunches were not uncommon, or finishing work early on Friday. Wadworth's 6X & a big, shared bowl of chunky chips was a popular lunch option - I was friendly with one of the bar staff & she ensured we always had a big bowl piled high.
At lunchtime it was a very pleasant place to be, with some characters - there was an old bloke who claimed he had poor sight, but always managed to pick an attractive young lady to take his arm, & escort him to the bar.
In the evening, especially at weekends, it could be different. You would get family groups from some of the rougher estates in, loading up on Hofmeister lager before going on to the nightclubs. I remember once some bloke picking a fight with my friend, Simon, & the whole family - ten, maybe a dozen, prepared to join in. Luckily, my friend on the staff saw what was happening & had called the police.
There was also a rock disco upstairs, called, I think, 'Spiders Bar'. Didn't often go - the choice of beer wasn't as good as downstairs. And you had to run the gauntlet of the meatheads below at weekends
Went back there recently. The Halfords you can see in the photo - still there in my day - has long gone. The big white building in the background, which was a rough pub then. The Dolphin, is now a very nice tea room. The Crown is now a typical 'Spoons' pub, no carpet on the floor, & the weekend clientele seem to have taken over.
There were many other pubs in the area, which have now closed. Bobby McGee's, the Long Stop, 5 Ways, the Upside Down bar to name a few. 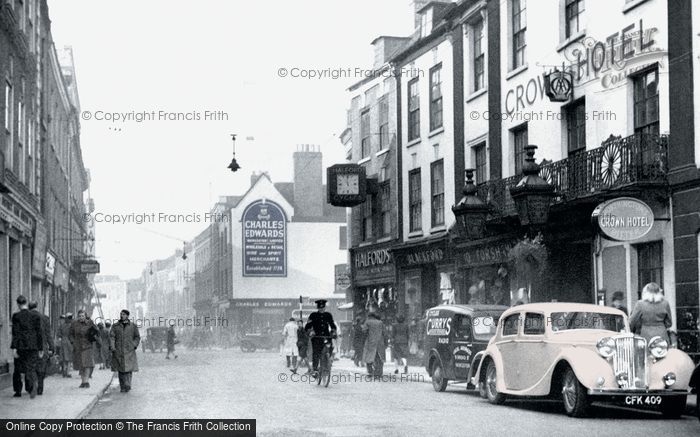