Life for a child in the village of Worle in the 1950s was exciting, parochial and safe. Our parents did not lose sleep over thoughts of us being molested. Children were more likely to be in danger from their own recklessness than anything else, and so our parents were able to allow us freedom to roam happily. My great friends, Kaye, Mim and I had a wonderful time. As Kaye remarked, at my 50th birthday party, we laughed, ran, sang and climbed our way through childhood.
My first introduction to the wider world of play was through the boys and girls in the lane and in Greenwood Road. A crowd of about twelve of us set off each summer evening to Tripp's Field, which could be approached via a stile opposite the Golden Lion pub. The Tripp family owned the local farm and actually had four fields, each one separated from the others by a rhyne (the Somerset name for a drainage ditch) and joined by a little stone-built, arched bridge. They kept dairy cows and sheep, and grew cider apples. The gang would stream over the stile into the first field, shouting to the cows by name as we passed, race across the first bridge and arrive at the first destination, the hollow oak. This was actually a beech tree, but we weren't bothered by such detail. There was a huge hole in the side of the old tree, and it was completely hollow with strategically placed knobs and dips all the way up the inside to aid the climbing process.
Two more bridges over two more rhynes took us into the old orchard. One of the biggest trees had fallen, but its roots were still in the ground, so that it didn't die. It was much more useful on its side and was wonderful to climb about on. It stayed there for four or five years. Poor Farmer Tripp tried to clear it several times, but we all pleaded and badgered him, and he kept giving in. Eventually, one summer evening, he sneaked out there late and sawed it up. The next day it was just a pile of logs and we were all heartbroken.
At the bottom of Greenwood Road was Our Rhyne, where we played for some part of most days. There was a goodly patch of waste ground adjacent to it and much fun to be had. The most favoured game was bridge building, and we became very proficient at it, constructing effective roadways to the old orchard. Unfortunately the bridges also impeded the flow of the water and invariably flooded the nearest garden, belonging to Jenny Vaughan and her family. Mr Vaughan would call in the Council, who would excavate the rhyne again, making the sides as sheer as possible. As soon as they departed we would rush back down, dig out steps and start again.
I walked to the junior school through the churchyard with Mim, and we knew every gravestone, especially those of the little children. My grandparents are buried there, now, at the top of the steps on the right. A white goat lived at the bottom of the churchyard among the graves, and we always took paper and rubbish for her to eat, before running up for a quick game of Hide and Seek in the shrubs at the top. Mim had an older brother, Maurice Williams, who had the singing voice of an angel and tolerated much teasing.
Kaye, Mim, Maurice, Mike Lovell and I often went 'up the hill' after school. Worlebury Hill was not all golf course in those days, and the woods and open hillside were good play areas. We had dozens of dens, ropes swinging from the trees and even an old abandoned shed. Everyone for miles knew about these glories, but we thought they were just ours.
Along the hill towards Weston was The Cliff, which was just that, with old ivy growing up the side, several feet thick. It was great to climb, once you had fought your way through the brambles at the bottom. It was easier by far to walk along to the top and climb down.
Children of all generations have crazes. We went through marbles, skipping, conkers and so on, all in their seasons, but had other enthusiasms as well. Newts were a great favourite for a year or so, and easily come by in the rhynes. A tank in Eric's garage housed them, and the sticklebacks, which I preferred. We looked after them quite well, adding a quantity of fresh rhyne water, with its content of plankton each day.
Quite suddenly newts became old hat, and we moved on to horses. There was a riding school on the hill and the horses wandered pretty freely. It was easy to catch them and ride around bareback. Much later we had some riding lessons, but long before this Mim and I devised a game that satisfied our horse lust. We ran an imaginary riding stable, used old shoe boxes to create an enormous filing system in which we stored details of the imaginary horses and clients. Each night we would fill in the cards, and decide which horses still needed exercise. Then we set off around the village at a canter. Everyone was used to this odd behaviour and no one said anything. I wonder what happened to all those files and things. It was jolly good practice for Mim: she runs Uphill Riding Stables now.

Tue Feb 10th 2015, at 12:35 pm
Maurice Williams commented:
Well written Raye, I remember these places & others near Worle well. I also had a cycle & would go down to the railway to see the steam trains go by. - Maurice.
Add your comment
Report abuse 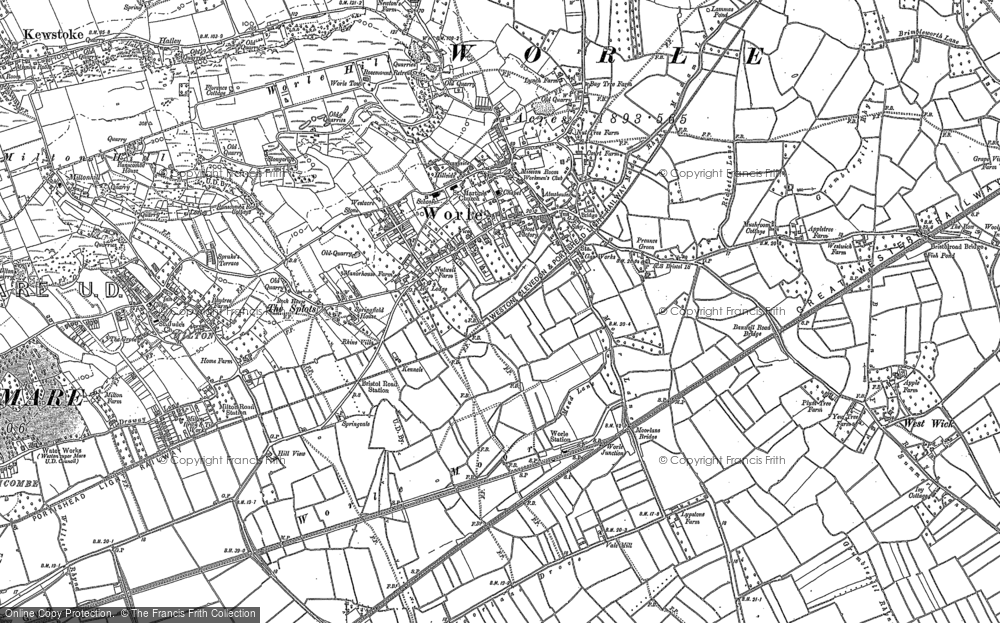