Family Holidays In The 1950s - a Memory of Wroxall.

I was born in 1942 and brought up in Walthamstow in NE London. We were a working class family and Dad always managed to provide us with 2 weeks' holiday somewhere. How we came to holiday in Wroxall is still a bit of a mystery. Neither Mum nor Dad had ever been to the Isle of Wight before. In August 1952 we had the first of three annual fortnights holidays on the Island.

The first year,1952, we stayed in a different lodging each week. I expect the accommodation was found in 'Daltons Weekly'. The first week we stayed at a Guest House called 'Tintern' which was an old detached Victorian house with rooms both on the ground and first floors let out as guest rooms. The house was located on St John's Road, Wroxall It was run by a Mrs Abbott, assisted to some extent by her husband Mr Abbott. No one of knew their Christian names.

I recall that there were four guest rooms in total, with one being a family room sleeping four people and the others sleeping two.This meant that that the family room had a double and two single beds in them whilst the others had two singles. When fully let, Mrs Abbott had 10 guests in total. Unfortunately, there was only one combined bathroom and toilet to cater for 10 guests. Getting up early, therefore, was essential if you did not want to wait for ages for the bathroom to become free. Mr and Mrs Abbott slept in a 'room' in the garden which was little more than a shed! But they had their own 'privy' at the bottom of the garden!

There was a dining room downstairs where Mrs Abbott served breakfast and the customary 'evening meal'. In 1952 food rationing was still in force, so food still tended to be bland. Mrs Abbott did produce a menu each morning showing what was on offer for the evening meal. One morning we found the main meal was to be 'savoury duck'. Our saliva glands went into overdrive at the thought of eating a delicious Oriental flavoured dish. When it arrived on our plates that evening, surrounded by the mandatory boiled potatoes and cabbage, the savoury duck turned out to be meatballs! It remained a family joke for many years after that. We used to boast to our relations that we had stayed at a place which served the delicacy savoury duck for our evening meal. We never let on that it was meatballs of course.

At the end of the first week we packed our suitcases ready to move to the second accommodation. This was called Batchelors Farm. The farm was between places called Whitely Bank and Apse Heath, names which sounded like ones which featured in Rupert the Bear or Noddy story books! As it was in the proverbial back of beyond and not served by train or bus, Dad hired a local taxi to take us there on Saturday morning.

The contrast between the two sets of accommodation couldn't have been more stark. The accommodation in the farmhouse was superb. Given there was no en-suite facilities but at least there was more than one bathroom. And Rita, my younger sister, and I shared a bedroom separate from Mum and Dad. The garden was magnificent and there were kittens and puppies to play with. Also, the food was exceptional compared to Mrs Abbott's scoff. I can remember having duchess potatoes for the first time. Not a savoury duck in sight either. The week was real magic.

The one drawback was the farm's relative isolation. Without a car, the only way to reach civilisation was to walk either back Whiteley Bank where we could catch either a no 16 or 17 bus which came from Ventnor via Wroxall and would take us into Shanklin or Sandown, or we could walk the other way to Apse Heath and catch a bus into Sandown. as Apse heath was marginally closer, this became our prefered route each morning.

Besides my spending time at Wroxall railway station watching the passage of trains, what we did as a family was lot of walking. Although a 'townie', my Dad loved to walk in the countryside. At home my Dad was always taking me for walks in nearby Epping Forest - 'The Jungle' as he used to call it - where I learned to understand about the various types of wild flower, types of tree and developed a general love of walking in a tranquil wooded area. The Isle of Wight was where I learned to love walking in beautiful open contryside.

The most frequent of our walks would be from Wroxall to Godshill. We would generally undertake this immediately after breakfast at 'Tintern'. The route was north up St John's Road for about half a mile then onto a path off to the left which led to Appledurcombe House.

From there the path meandered across fields and through small copses until it met the road from Shanklin. Turning left onto this road it was about a quarter of mile to Godshill village. Here, we would go into the garden of one of the pretty tea shops which flourished in the village. I would be treated to bottle of Whiteways Cidrax with a straw and a packet of Smiths crisps with the little blue bag of salt in it. Mum and Dad would have a pot of tea and my sister Rita, aged 6 in 1952, would have a bottle of lemonade.

After refreshing ourselves, we would then board a bus into Shanklin, arriving about mid-day. Mum would go shopping for rolls and some kind of filling - ham or spam most likely - then we would adjourn to the beach for the afternoon. At the end of the day, we would trudge back to Shanklin station and take the train back to Wroxall in time for dinner. Perhaps it would be savoury ducks tonight! 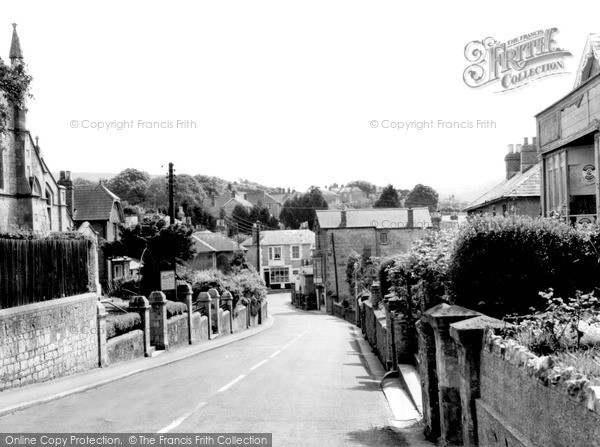