Working In The Shambles - a Memory of York.

I was working at Deco in Stonegate the year they moved to the last shop at the end of stonegate, bordering Whip-ma-whop-ma Gate (wonderful name). I had been working for the people who owned Deco, selling 1930's pottery, glass and Jewellery, for a year. The shop was well known and we sold Clarice Cliff and Susie Cooper pottery, Crown Devon, Royal Dux, you name it, if it was 30s and collectable, we sold it. When they moved to the Shambles, the shop was bigger, the rent was actually less than Stonegate then. I remember telling my Granddad about it. He told me he had worked in the exact same shop when he was a lad, only it was a butchers then, as most of the shops down there were at that time. The name "Shambles" comes from the Saxon "Fleshammels", which means, "the street of the butchers", it was listed in the Domesday Book and has been in continuous existance for 900 years. There are large sills and hooks still above the windows where meat was displayed and hung. Those were the days before health and safety, trading standards and food hygiene... To be working in the same shop my Granddad had worked in was a little odd, but special. What were the chances? He was 12, he told me, which makes it somewhere around 1916/17, just before the WW1. He was lucky to be young enough to avoid having to join that conflict. He later worked first for Stirges, then Cardbox (where they made the boxes for Rowntrees) then Rowntrees itself. He originally lived in the Hungate area and went to school in Fishergate (where my mother - his daughter - taught in the late 1980s). Continuity has run throughout my life like that. I ended up working for M&S on Parliament Street, right next door to the Shambles, nearly 100 years after my Great Aunt had worked for them back when it was the Penny Bazarre. York is an amazing place with so much history, I'm proud to be born and bred York girl. 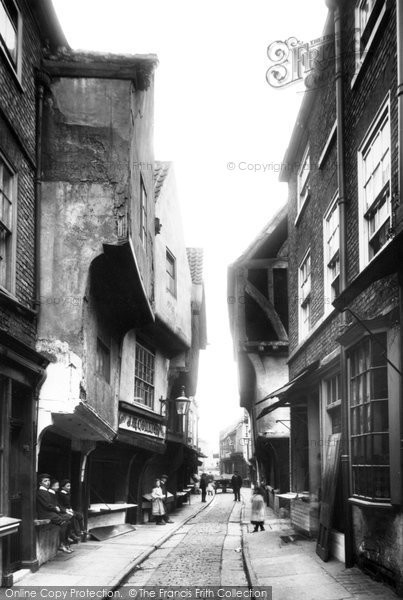