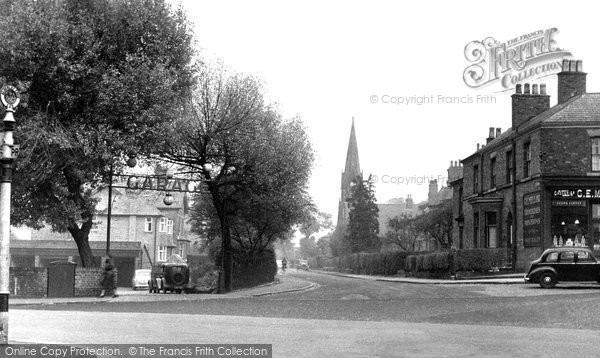 Caption for Alderley Edge, Chapel Road c1955: However, all this changed with the coming of the railways. Within 20 years, well-to-do commuter communities had sprung up along the lines; indeed, Alderley Edge village itself did not exist before the trains came - it is a Victorian creation dating from 10 May 1842, when the station opened. Other villages, such as Wilmslow and Prestbury, expanded to become the places they are today. Yet, as one travels around, one meets pockets of very old landscape, and some places still exert the same fascination as they did hundreds of years ago. Lindow Moss, the peat bog shared between Wilmslow and Mobberley, is still in places the mysterious half-land half-water landscape where two thousand years ago a Celtic tribe sought to appease the gods and keep the Romans at bay by sacrificing one of the best of their warriors. Lindow Man reappeared in 1984, but he was not the first bog body to emerge out of the moss. A few years before, another head had been found, and so well preserved was it that the police treated it at first as a murder enquiry, and indeed arrested a man whose wife had recently disappeared. Faced with what he thought was the discovery of her body, he confessed and was convicted of murder. Such bizarre episodes testify to the fact that this seemingly respectable landscape of well-to- do businessmen (together with the odd footballer and his wife) has a number of quirks. There are others. The flat landscape of Mobberley bred one of our country`s most famous mountaineers, George Leigh Mallory. Beside the A34 in Nether Alderley is the grave of the third Lord Stanley, buried apart from the rest of his relations as he was a Muslim. Up on the Edge is the oldest-dated copper mine in England, and evidence that the Romans were looking for lead as soon as they conquered this part of the world, proof indeed that the sacrifices in nearby Lindow were in vain. As befits a landscape with such a deep heritage, the National Trust has considerable parts of the area under its care, notably Alderley Edge, and Styal with its Mill, accompanying village and walks in the woods along the Bollin. Elsewhere concerned residents do their best to make sure that this landscape remains as unspoiled as possible, although the nearby Manchester Airport makes it clear that modern life cannot be kept completely at bay.

I lived at 100 heyes lane. Alderley edge. For about five years from 1950 to 1955. Went to Alderley edge school. Teacher mrs Gibson. My name then was Ann Christina Taylor. My father grew vegetables on his allotment. He worked for ICI in wilmslow. I remember a man selling goldfish in bottles at the entrance to school lane. (...Read full memory)

My parents and grandparents bought Clockhouse Farm in 1938, following the break-up and sale by auction of the Stanley Estate.  A photograph of the farmhouse was shown on one of the pages of the brochure describing the property available at the auction sale.  I believe the farm, some 75 acres with the (...Read full memory)

This photo has troubled me for quite a long time. I spent my childhood in Alderley and the surrounding countryside and I feel this young boy is me. Unfortunately the date doesn't stack up, if it is me it would have been about 1965 and the girl was called Christine. Only she could verify! Thank you for your (...Read full memory)

I have a copy of the property sales of the estate and it's amazing to see the prices. The photo are good too.