An Acc Cook - a Memory of Aldershot.

The winter and spring of 1958 I was an ACC cook in the hospital kitchen. On one night duty I contracted tonsillitis and was put in the ward upstairs where the ghost of 'Sister Aggie', as she was known to us, was supposed to haunt and give comfort at their bedside of those who were about to slip away. She did not appear to me as I was not about to die. I had to sample our food which was sent up from the kitchen in heated trolleys. It was not too bad when it left the kitchen, but the time it got on to the plate in bed on the ward it was pretty grim stuff that would just about finish anybody off.
Someone the Victorian ghost nurse might have appeared to was a young soldier who was put in a special private ward reserved for those who had not long to live. I was detailed one morning to go and offer him the 'special diet' for his lunch which meant in effect that he could have anything he asked for. He was so ill that he could hardly speak in that room with the curtains drawn. Anyway I cooked him best fillet steak, saute potatoes, grilled tomatoes, buttered peas, and gravy. He did not eat it I was later told, and the black van was drawn up for him in the courtyard the next morning. His name was duly wiped off the kitchen chalked board. Sad.
The kitchen in 1958 had hundreds of large cockroaches which came out at night when we were on night duty. The kitchen did not come under the civil local authority rules so it was not inspected by the local health officer. One day two regular corporals from the Royal Army Service Corps came to test some poison on them. We lads of the Army Catering Corps fished out the biggest cockroach we could find with a palette knife, put it on the floor and said to the RASC chaps, "Kill that!". The corporal poured a large pyramid of white powder over this inch long creature who stood for a minute, then shook the powder off his back with a flourish, then strutted of back to his den leaving a trail of poison powder on the tiled floor. This little scene provided us National Service lads with the biggest laugh we had there, and has kept me in stories for years. The fate of the roach was not known.
In 1976 I went back to photograph Cambridge Military Hospital to do a drawing illustration, one of 140, for the book 'Around Historic Hampshire' by Colin Wintle. The original drawing was sent to the C.O. of the hospital in 1977 and was just about this view as shown here.
I believe the building is now converted into flats. It remains to be seen if the ghost of Sister Aggie will continue to visit and comfort those who are about to slip away into the next life. VS 2011 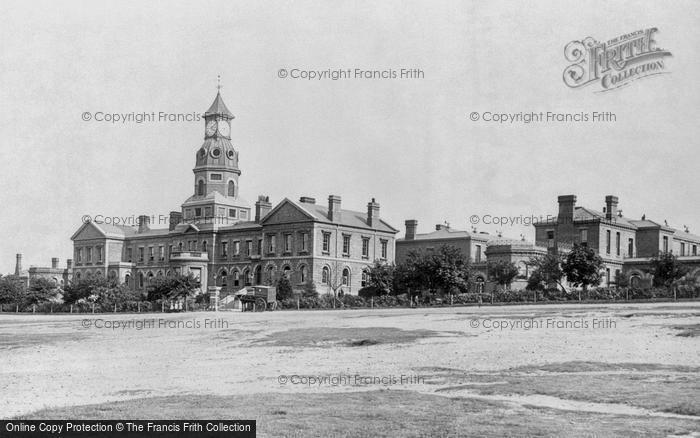