Birds Nuts And Bumping Cars - a Memory of Aldershot.

In 1944 my mother and I moved from a two bedroom basement flat in Grosvenor Road at the top of the town, to Chrismas Avenue, a three bedroom semi-detached, that connected between Ash Road and Newport Road. My father was away with the war in North Africa.

I soon made firm friends with the Chismas Place gang.... the Place being a small cu-de-sac off the Avenue, that had many more interesting children living there.

The Manor Park was a mere hop, skip and a jump away for the Chrismas Place boys and girls, with just one dangerous main road, "The High Street" to cross which sadly did claim one of our numbers...David.... a highly priced lesson was learnt by us all.

But the Manor Park was our teacher too, it taught us how in those post-war days of rationing that you could keep the hunger pangs at bay by knowing that the nuts from the beech and the chestnut trees were very tasty and we often returned home at end of day with pockets bulging with treats for our mums and dads. It taught us how to climb the highest tree, how to negotiate the stepping stones to the Island in the pond without getting wet or falling in, it taught us the different species of birds and the difference between a red squirrel and the nasty grey one. So much so that when at one time the powers that be put a bounty of 5 shillings on the tail or brush of the grey, us kids spent hours on our bellies trying to sneak up on them..... needless to say, none of us ever caught one.

At the age of six or seven I had my first date in the park with a young lady whose name my memory can't recall anymore, but she had the same liking for climbing a tree under which the park keeper had built a very large pile of dead leaves into which we would laughingly jump into.....till the parky chased us off, and we ended our date in the little shop across from the park sharing a small penny bottle of cherry pop. As we grew older the park made a good platform for discussions on the birds and the bees.

Each year the fair would come to town and we would eagerly await the opportunity to earn a bit of extra money working on the rides or for us younger lads helping to dismantle it at the end of the week for the princely sum of 5/-bob to 7/6 it came in handy, but the chance to be out working till 2 or 3 am was even more exciting....now and again a lad would disappear with it... and sometimes later rumours would circulate that a young girl would be pregnant by a fair lad....usually it was what we would now call an urban myth. When the fair had gone memories lingered on for many weeks in the discoloured and misshapen areas of grass left behind, but the park and nature soon recovered and returned it to normal.

In the photo it shows across the road the white deco styled building which was the "Pavilion" picture house where all us kids from the surrounding area used to meet up for Saturday morning pictures, the entrance fee at one time was if I remember correctly a thrupenny bit and or a glass jam jar. Many an afternoon seven or eight of us lads would either pay or bunk in, sit in line and share a large bottle of lemonade and a freshly baked loaf of bread between us.... you can imagine the state of the lemonade bottle and the bits in it by the time it got to the last kid in the line.

Further along, the High Street opposite the park entrance was the manor park tea rooms whereas young teenagers we would while away our evenings listening to Elvis and practice our chat up lines on the girls.

And that is my memories of "The Manor Park", dedicated to all the boys and girls of the Chrismas Gang, and the Newport Road boys.

Tue Oct 8th 2019, at 3:29 pm
lizkene commented:
The sweet shop opposite was Bodles. We could o fly get spanish root as sweets till 1950's
Add your comment
Report abuse 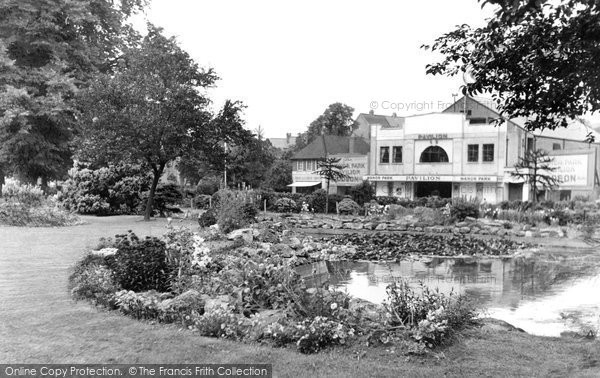