The history of Nottingham and specially selected photographs

Nottingham is a city with a long and turbulent history - the castle, which has been rebuilt several times over the past 1,000 years, is a living symbol of this. From being a medieval walled town, Nottingham expanded dramatically in the 19th century, when the Industrial Revolution created new trades; Nottingham's citizens took full advatage of these. Nottingham is now a modern city with a wealth of Victorian buildings and also possessing much of historic interest.

Nottingham can look back with some pride at its history of over 1,000 years. It is said that few events of national importance occurred at Nottingham during its history, but throughout the Middle Ages, kings and queens made Nottingham Castle their headquarters for the Midlands and the North. Two kings rode out of the castle to fight decisive battles. In 1485, Richard III rode to Bosworth Field where he died in battle; and in 1487, Henry VII rode to East Stoke where he was victorious over the Yorkist army supporting Lambert Simnel. While no major battles were ever fought at Nottingham, during the twelfth and thirteenth centuries the castle was besieged on a number of occasions and the town was sacked and burnt several times.

Charles I chose Nottingham when he made his stand against the Parliamentarians in 1642, although the town's sympathies were divided. The response to his call to arms was only lukewarm, and after staying only a month, he moved on to Shrewsbury.

Nottingham's early history is vague; it was not until AD 868 that the settlement was mentioned in recorded history, when a Danish army wintered here. In the following decades more Danes settled in the East Midlands, and Nottingham was established as one of the five boroughs of the Danelaw, together with Leicester, Derby, Lincoln and Stamford. The Danish borough was situated on the low plateau where St Mary's Church now stands, and the proximity to the River Trent made it strategically important. The first bridge to be built over the river was completed around AD 920, and the town was then on the direct route from London to York.

The borough then encompassed only a small area surrounding pre-Conquest St Mary's Church - the site of the western rampart can still be seen between Fletcher Gate and Bridlesmith Gate. When William the Conqueror marched northwards with his army in 1068, he chose the hill to the west of the town for his castle. The first buildings were of wood and defences were of earth, but by the end of the 12th century they were being replaced by stone.

This was the beginning of Nottingham's great involvement in national affairs, although its citizens were probably only aware of this when the town was being attacked. The French borough was situated to the east of the castle with streets leading to the large open area halfway to the English borough, which gradually became the main market place of the town. The medieval town of Nottingham was small, with a population of under 3,000 - Norwich's population at this time was 15,000. Most of the houses and buildings were made of wood, and due to a succession of fires virtually none of them has survived. The layout of the town has remained unchanged to a large extent since then; many streets have been widened, but St James's Street, Bottle Lane and Hurts Yard remain their original width. The wall whcih encompassed the the town was built in the 13th and 14th centuries, and the borough of Nottingham remained within this until the 19th century. The majority of the citizens of Nottingham probably never travelled far beyond the town boundary, but the alabaster ornaments for which the town was famous were sold throughout Europe.

Other trades for which Nottingham was well-known included tanning, brewing, weaving and pottery-making, and several other occupations are still perpetuated by street names such as Pilcher Gate, named for the makers of 'pilchers' or furs, and Fletcher Gate, the street of 'fleshers' or butchers.

In the late Middle Ages, the town still had a rural aspect, with many orchards and gardens. The streets, however, were no cleaner than in any other town of the country, and diseases such as the Black Death spread rapidly.

England enjoyed a period of relative peace and prosperity during Tudor times; Nottingham Castle was by this time crumbling away with disuse and became uninhabitable. When the Civil War began in 1642, the castle was repaired by Colonel Hutchinson and held by the Parliamentarians throughout the war, although the town suffered from attacks by Royalist troops. After the war, the remains of the castle were demolished to prevent its further use. The Duke of Newcastle bought the site and began the construction of the present Renaissance building.

17th and 18th-century Nottingham was an elegant town; travellers who visited it during that period all commented favourably on the style of the houses and buildings, and on the colonnaded walkway on Long Row. For the wealthy, the town offered a life of pleasurable social rounds, but for the majority of the citizens, life was very difficult and riots were becoming more frequent.

In 1740, the population of Nottingham was still less than 10,000, but overcrowding was becoming a problem. By the end of the century, the population had risen to 29,000. The growth of framework-knitting in the 18th century and the apparent prosperity of the town encouraged country people to move into Nottingham. Its boundary was inflexible, however, as the borough freemen would not allow expansion onto the common land north of the borough, nor onto the meadows towards the River Trent. This was the period when the notorious back-to-back houses were built in the remaining open spaces of the borough and on the land evacuated by the wealthy who moved out of the town centre.

At the beginning of the 19th century, Nottingham was at the centre of the knitwear industry, but the local stocking-knitters were beginning to suffer from a drop in demand for their products, along with price-cutting by the middlemen who controlled the industry. Between 1811 and 1816, there were violent disturbances by the frameworkers in the area - these frameworkers became known as Luddites. Local engineers were then producing machines for the manufacture of lace, which until then had also been a cottage industry. Small factories were opened in the suburbs of Radford and Basford, but it was not until the middle of the 19th century that large factories and warehouses were built in Nottingham and the surrounding area.

In 1831, Nottingham suffered from more rioting when mobs, protesting at the rejection of the Reform Bill to extend voting rights, rampaged through the town. After attempting to fire Colwick Hall, they marched up to the castle and set fire to the building, which was gutted. The castle was to remain empty until 1878, when it was opened as a Museum of Art and Science.

Nottingham was finally able to expand beyond its old boundaries in 1845 when the Enclosure Act was passed in Parliament. This allowed building on the town's common lands, although construction was slow to go ahead. Nottingham as a major town may be said to date from 1877 when the suburbs of Sneinton, Basford, Bulwell, Lenton, Radford and Sherwood were incorporated within the borough. The population was then increased from 86,620 to 157,000.

The first major clearance scheme of slum properties in the centre of Nottingham, was the destruction in the 1880s of the many yards, known as Rookeries, that lay beyond Long Row and Parliament Street. This allowed the building of King Street and Queen Street, giving easier access into the Great Market Place from the north.

In the 1890s the whole area east of Milton Street was cleared of its warren of houses, and the Victoria Railway Station was then built on the site. The station, which remained for fewer than 70 years, is still remembered with affection by many Nottingham people.

The borough was given city status by Queen Victoria in 1897; the date coincided with her Diamond Jubilee and thus gave the populace a double reason for celebration. The population of the new city was then 239,000 - a figure which has only increased modestly since then.

When Nottingham was given the status of a city in 1897, one authority described it as 'a large and improving town'. Industrially, great changes were taking place in the city. Lace making and hosiery knitting were still the principle trades, but along with these traditinal enterprises, three new industries had begun in the last quarter of the 19th century. Three men, one from Nottingham and the other two who made their names here, began separately to create a major new industry in the town. Jesse Boot, from humble beginnings as a herbalist, created a manufacturing and retailing chemist's business which is still the leading private employer in the city. There had been a small tobacco factory in Nottingham for over 50 years when John Player took it over in 1877, but it was in the late 1890s when the great expansion in the business took place which led in 1901 to the foundation of the Imperial Tobacco Company. The third great new industry of the town - the Raliegh Cycle Company - was founded by Frank Bowden, who in 1887 invested in a small bicycle works and within a few years had created the world's largest bicycle factory. Without these three major companies, Nottingham would haev suffered more severely from the slump in trade in the 1920s and 1930s and the decline in the lace industry.

The next period of change in the city was in the 1920s, when Friar Lane was widened, with the consequent loss of Dorothy Vernon's house, which caused a great protest.

The Corporation then proposed the demolition of the Exchange building and the many shops and public houses behind it. This scheme produced an even greater outcry, not only at the cost of building a new town hall but at the realisation that the annual Goose Fair was to be removed from the Market Place to another location. However, this enterprising scheme was approved, and the new Council House has become a source of Civic Pride.

Nottingham Goose Fair, which for centuries was held in the Market Place, may originally have been held in Weekday Cross. It is a matter of conjecture how old the fair is, but tradition states that it dates from 1284, the year of the charter of Edward I. As with many fairs, Nottingham's fair took place after harvest time, when geese had been fattened on the corn stubble. One of the last deeds of the Mayor of Nottingham was to entertain the burgesses to a feast at which roast goose was the prime joint, and this custom was observed until 1781. The fair was originally intended as a mart, but in modern times it has become a pleasure fair. It is held for three days every year in early October, and is still a major event in Nottingham’s year.

Nottingham began the 21st century by introducing an old form of transport brought up to date. The city's modern trams give a distinctly Continental air to the streets. 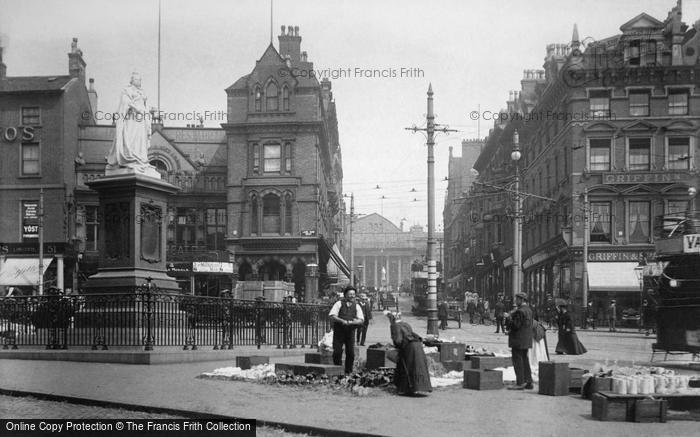 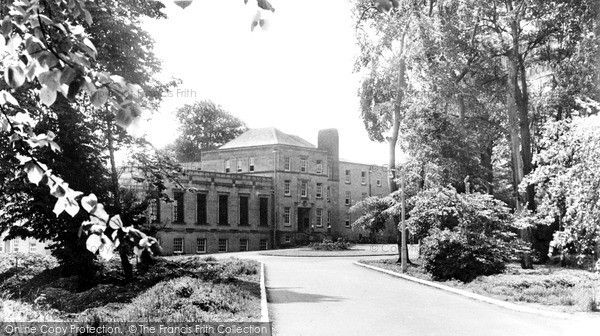 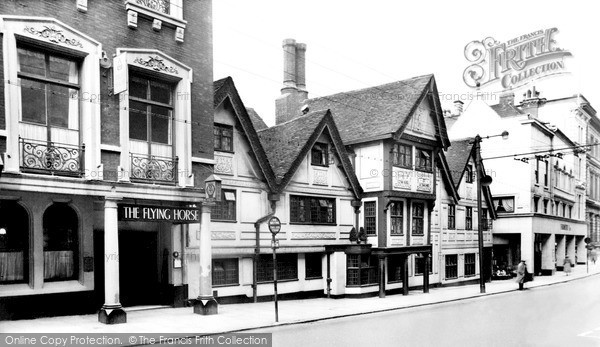 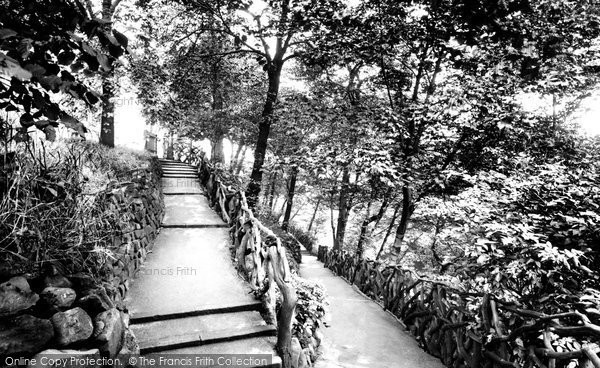 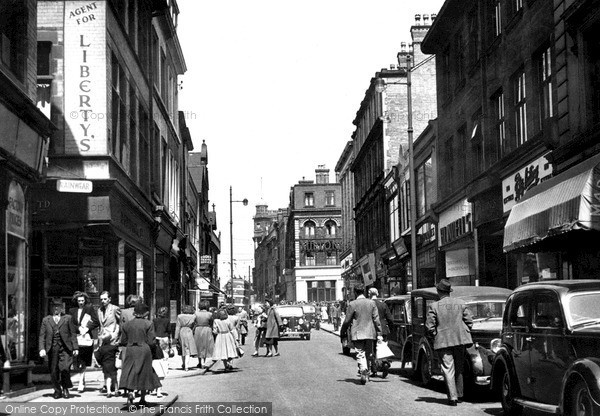 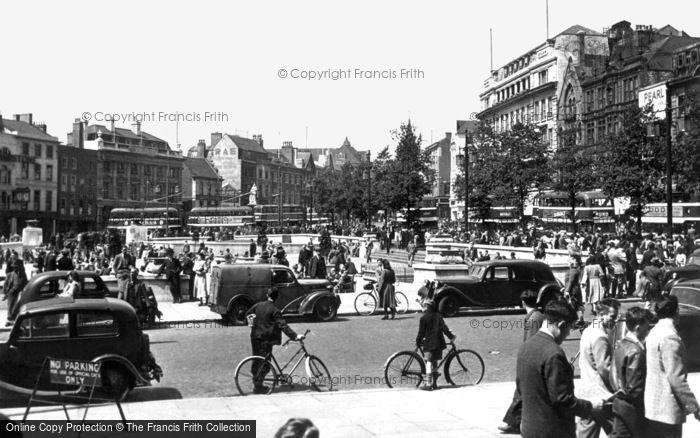 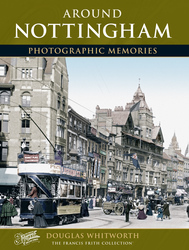