The Original F.Frith & Co - a Memory of Reigate.

My first job after leaving school in 1968 was at the original Frith & Co. in Raglan Road, Reigate. The company was based in a large Victorian mansion and in many ways the working methods probably hadn't changed much since the early 1950s.

The nostalgia market was in its infancy in 1968 and the company had no idea about the potential value of the historic collection held in its negative library. The library was presided over by an elderly lady called Mrs Wiffin and in this dusty room were not only the thousands of negatives (taken all over the UK), but also some original and very large glass plates, held in a wooden box. These were, I now assume, the work of Francis Frith himself from one of his Middle East trips.

By the late 60s, most other postcard publishers had progressed to high quality colour production. Frith's declining market relied on a dwindling number of village post offices ordering 250 or 500 cards, the sort of quantities that bigger publishers weren't interested in. Although Frith did publish a limited number of colour postcards, they were printed off-site at the Cotswold Collotype Company and could not compete commercially.

As a 16 year-old, one was expected to work through a number of departments under the supervision of the Sergeant brothers, known to staff as Mr Fred and Mr Trevor. These two had migrated to Reigate from a northern 'real photo' postcard company many years earlier, with their father. A trainee would start with such basic tasks as cleaning and running the two drum glazing machines and cutting up the long rolls of postcards into shorter sets for back printing (done by Eddie) on a Heidelberg printing press.

There was lots of work in the darkroom, producing proof prints, and best of all, assisting with the monster real photographic printing machine which produced the postcards. Once you had mastered the quirks of this hissing and clanking beast (working under the dim safelights), you were allowed to progress to operator status. This took nerves of steel as you had to do exposure tests between print runs and it was considered bad form to allow a break in production. Moreover, small fires would regularly break out if you allowed the paper web to tighten up round the gas heated drier (which also included electrically heated elements replete with exploding fuses caused by water ingress).

Postcard printing mainly took place in the winter and in the spring as many of the staff would be out on extended trips, taking updated or new views - 'once the leaves were on the trees' was the rule. I only ever got to do one published shoot, which was the new Whitgift shopping centre in Croydon. I do recall the then MD, Philip Carnell, regularly taking some of us for a drink at the Yew Tree pub on the main road after work.

Sadly, it fell to me to print the very last Frith postcards. The final standard size postcards were cut off the last bulk roll and given an extra wash to better preserve them. They were then hand glazed, but not back printed. I still posses my copy as a memento, together with its machine negative. The other card (cards were printed two abreast) was given to the machine assistant. By the summer of 1970 my short career at F F & Co. was over and I got my P45 once the firm went into liquidation. The building was demolished and houses now cover the site. The rest is well documented history, but with a happy ending as can be seen from this website. 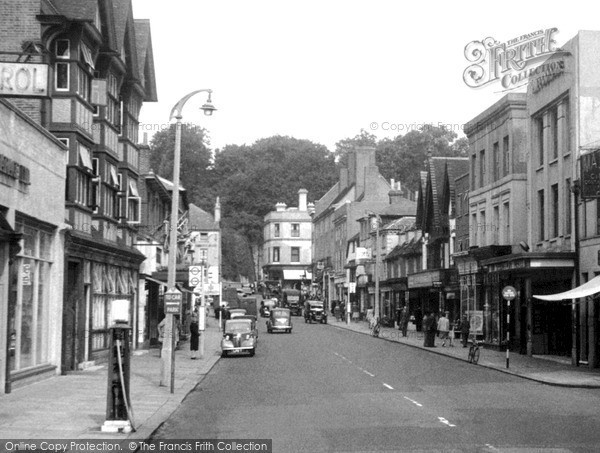