My Birthplace - a Memory of Abercwmboi.

It's the 5th February 1953 in the front upstairs bedroom of 15 Elm Street, and Abercwmboi welcomes a new resident - me! The house belonged to my grandparents, William Joseph and Claudia Morris. I was to remain a resident there for three years until my father, Michael John Wale finished his national service and returned to move my mother Jean and me, Martin, to our very own home. Not too much of an upheaval actually as it was only three houses away to number 12.

The Phurnacite Plant was to be an ever present backdrop to my life for the next 13 years. Like all kids I took it for granted, its sights and sounds and more memorably its sulphurous smells, greeted me every morning and acted as a lullaby every night. On the rare occasions I was away from Abercwmboi I never understood why I could never get to sleep, it never dawned on me I was missing the "Phurnie".

The Phurnie was always a place of adventure, grossly illegal of course but the tar pits next to the 'Lake', the cooling towers up near Aberaman Park, the massive slag heap smack dab in front of the village, the criss-cross of railway lines, all provided hours of fun for boys to spend their time running, jumping, climbing, sliding and hiding amongst the myriad of nooks and crannies the place offered. It was always made sweeter by the chance that we may get caught. I don't think any of us ever were as the most I can ever remember is the occasional voice booming out, "Oi you lot, bugger off or you'll be for it!". For what, I'll never know because as I've said, none of us were ever "caught".

Away from the Phurnicite the other side of the valley was, in our terms at least, quite countrified. Above Ash Street and Maple Terrace was the "Breast", just a slope of grass really that sat like a ribbon of green between the village and the "Forest" - a plantation of pine trees planted on the "Mountain" by, quite frankly I haven't got a clue, but in my memory they were always there. It never occurred to me at the time that our piece of country had a great big tube of steel running through it that may have indicated a somewhat less than rural image but anyway, this tube was universally referred to as the "pipe". As a kid I must have walked its length 100's of times, from a concrete platform located above "Garden City" at one end to the old pit head up from Bronallt Terrace at the other - never once getting off, fun times!

My childhood memories seem to be full of kids, I have no idea how many people were in the village then and have no idea of how many kids there actually were, but my time from the age of three at Cap Coch nursery, infant and junior schools respectively seem, in my memory, to be crammed full of friends and good times. Too many to name individually but I know I was to marry Ann Williams when I was older and Ceri Lloyd was my only intellectual rival (even though some thought John Kedward was also, but that was never the case). Cap Coch School was wonderful, from my elephant blanket in nursery to my final report from Mr Price and Mr Edwards (Baldie) the headmaster, a report that saw me positioned at number one in the school (yah-boo-sucks Ceri!) and the only boy to pass the 11plus to Aberdare Grammar School that year (although Ceri did get into the Girl's Grammar) - every memory is a gem, even Miss Watkins using the ruler just a bit too enthusiastically across the knuckles.

What more to say about Abercwmboi? St Peter's Church has to be mentioned, especially the church hall where more fun was had although I must have done some serious stuff there as well because I was confirmed in Llandaff Cathedral on the strength of Sunday School teachings! I did used to counterpoint the official Church teachings with a bit of fire-and-brimstone sessions from visiting lay preachers. They used to take place in the hall behind Jack Eyles's fish shop I seem to remember.

The Billiard Hall and the "Bug", I nearly forgot them! The billiard hall is exactly what it sounds to be, although snooker was my game of choice. The "Bug" was the local Cinema, God what a place - I loved it! Polly and Millar were the ubiquitous usherettes, always shining their torches into crannies where little boys might be hiding and getting up to mischief, like making lolly stick boomerangs to throw at the screen when the film was boring.

So many memories and I haven't touched on the British Legion Club yet. Maybe I have more memories of that place than most because my grandfather was Chairman and my father, Secretary and Treasurer for most of my life there. A claim to fame though, I payed-off Tom Jones (yes THE Tom Jones) after the first half of his set because the blue rinse brigade thought he was too loud. I think the task fell to me because my Dad 'didn't want a fuss' and I think young Tom had a bit of a reputation in the valleys in those days.

Its strange how a photograph spotted on the internet can cause such a flood of instant memories, with each memory nudging the old grey matter to open the window to yet more memories. I realise now I could go on all day but I won't. Suffice to say, at the age of 13 my Dad, Mam and a brother and sister by this time, upped sticks and moved to England. A great deal has happened to me since then, mostly good stuff I have to say, but sometimes, when I think of my childhood in Abercwmboi I wonder now and again, if I'd stayed there - what might have been? 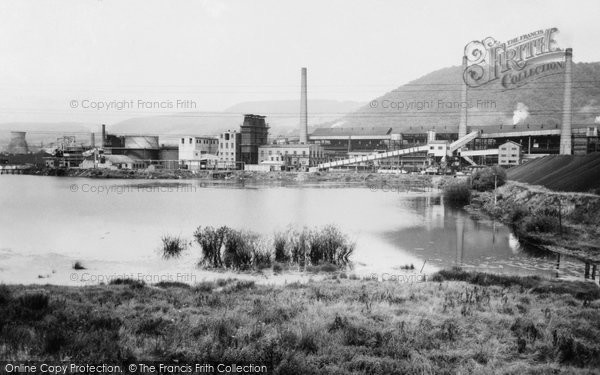