Borth Amlwch - a Memory of Amlwch.

I am now in my mid 80's. I lived in Borth from the age of about three until eleven years at 23 Well St (Lon Wen). This was during the days of the depression and conditions in the port were grim. Many of the men had joined the whaling fleets and as they sailed past North Anglesey from Liverpool the families would gather on Llam Carw and wave tablecloths. At the bottom of Well Street, just above the park, there was a fish and chip shop owned by a Mr. Pierce. There was a lane by the side of the shop where there was a pump from which we obtained our drinking water. Close to this pump was a sweet shop. Across the road on the southern side of the park there was a bakery and alongside of the bakery was a lane leading to a place I knew as 'Gwaith Paent' where the was a type of turret in a pond and a big square cement erection. Where Craigydon is now was 'Gwaith Hills' , a number of clinker hills left after the ore smelting. It was 'the wildest west' where we played cowboys and indians. We went bathing in a tidal rock pool which was to the west of the harbour entrance. We reached it by a path which ran along the left of the harbour (looking out to sea), crossing a very unstable bridge on the way. My aunt and uncle owned the Kings Head in Amlwch and it was a special treat to go and have tea with my cousin on Saturdays and to go to the nearby railway station to look at the trains. My memory of the names of the people I knew is very vague. There was Enoch (a boatman?), Albert (his father was a grocer), Trefor (Pallas?), Gwilym (Thomas?), may have become MN officer, Hugh (may have lived next door), Kathleen (Baxter?), she had beautiful brown eyes, and was probably my first passion, George dyn du (may have been a local character). It is over 70 years since I have left Borth but I still recall it with affection. 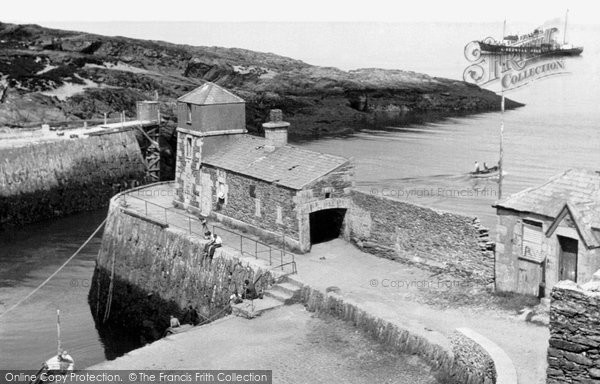