Dungeons And Dragons - a Memory of Ashby-de-la-Zouch.

The ruins of Ashby Castle also hold memories. Some are of sitting at school, gazing morosely out of the window while well-intentioned teachers attempted to impart the joys of adding up using letters. At the ripe old age of 10, I felt that algebra was an unreasonable confusion of reading letters and understanding mathematics to make incomprehensible jumble of otherwise meaningful ciphers. Another reason for looking at the ruins was to imagine how they got that way as Cromwellian forces blew the building apart, while Mr. ‘Windy’ Gale fought with the reel-to-reel magnetophone in French lessons. The recurrent reason for speculating about the ruins was the suspiciously straight, almost imperceptible hump, that ran from the Manor House School under the lawn to the Castle - for surely here was an Enid Blyton of a secret tunnel. Speculation was rife among the boys; well, it would be, it was a boys’ school. Our grey uniform shorts with maroon blazer topped off with a quartered cap seemed archaic at the time, now they seem antediluvian. Notwithstanding this and inspired by the joys of black and white TV sets the size of caravans, we knew of ‘The Great Escape’ and ‘Colditz’, so we set off in search. In the bowels of the Manor House there is a cellar accessed by winding stair that led to a dank main room used as changing rooms at the time. The smell of damp and B O was pungent, and clothes left there would often be found dusted with peeling paint. There were also rooms off this large one; there was a boiler room, storage space and an alcove. It was here we were to tunnel until we realized that our shorts were not long. So our stratagem of imitating the ‘great escapees’ in the playground was scuppered. Such disappointment was difficult to bear. So one weekend we went to the other end of the tunnel. The tunnel under the castle was, at the time, pitch black, running with water, full of puddles and spiders’ webs, and could only be navigated by touch, and did I mention that it was pitch black? After the experience of screaming and howling our way through almost tangible darkness, we quit speculating and went back to our desks to continue carving our names into them with compasses with renewed fervor. 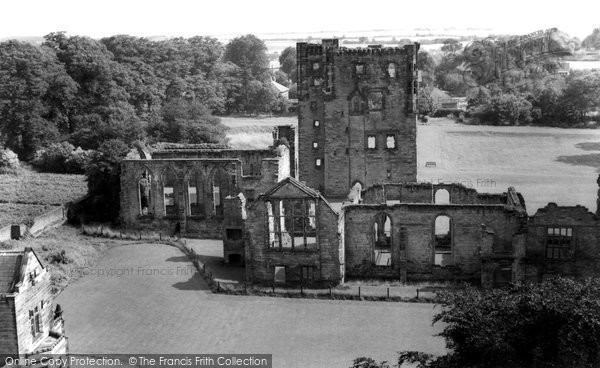