I am Ray Morgan and I moved into a flat over Webbs the estate agent in 1949. My brother Paul was born in 1950. My father Vincent was self employed and set up a car hire business. Later on he started to teach people to drive (The Esher School of Motoring); one of his pupils was Pertula Clark who lived in our area. My brother paul started primary school there in 1955. When we first arrived in the approach the memorial gardens were allotments. My brother's god father was Mr Teddy Missing and he was the local Baker. The familly that now own the bakery ran a campain to stop Mc Donalds turning the Hinchley Wood Hotel into a burger bar. They and many people from the village took it in turns to stay at the hotel so no contractors could get on to the site, and they won their case. The campain just said, 'Burger Off'. My friend, William Shepard, his father had a school of dancing which was next to Mr Dick Langston who had the newsagent and sweet shop. Mrs Papworth had the green grocers shop, and Mr Cooper had the electrical shop. One of my dad's friends was the manager of Platts the grocers, he went to Hong Kong as a supermarket area manager before we even had supermarkets in the uk. Our flat was at the end of the shops, it was a very cold flat in winter because it was made with only one layer of bricks. When the houses were built onto our home, it made our flat lovely and warm.
From our flat you could see the railway station. We also had a tea room called the Orange Tree.
In 1955 I went to Hinchley Wood Secondary School untill 1961.
My main memory was of our milkman that will stay with me for ever, after he had finished his milk round he would visit The Hinchley Wood Hotel. he would put a nose bag of food over his horses head then he would drop a heavy wait on the floor so the horse stayed put.
He would always walk out of the establishment a little worse for wear and the horse would take him back to the depot (you could not do that now).
The shops in the parade have not changed at all and its like walking back in time to my childhood.
I can remember the buses only ran along the main kingston by pass and only ran every half hour the nos of the buses were 72 and 152.
What is now shell petrol garage used to be the Esher filling station which serviced cars and was aslo a car show room. Where you could get 4 gallons of petrol for £1.00 and the average salery was £7.50 a week.

Fri Mar 13th 2020, at 9:30 pm
jabrewster64 commented:
I lived in Hinchley Wood 1966-86. I remember all the shops you mentioned, plus Butchers (Mr King) on same side as Mr Missings bakery. I went to Anne Shepherds ballet school (at age 2 1/2 !) it was quite small, I think it closed and we started at one in St Christopher’s church hall. I remember the green grocers, think it was owned by someone called Alan (?) in the 70’s.. There was also a launderette on the same side as HW hotel, which we used before getting our own washing machine. The memorial gardens was a lovely park area (later 60’s) with an enormous weeping willow tree down one end, my sister and I used to play under it 💓 happy memories 💓
Add your comment
Report abuse
Mon Apr 30th 2018, at 10:59 am
delavarde commented:
Hello Ray Morgan,
My name is Nigel Venus. I have just stumbled upon your 'memory lane' comments......great stuff! I remember it well as I lived in Montgomery Avenue just the other side of the station. I recall the flats being built in front of the station by Kingstons the builders in the late 1950's. As a small boy I used to climb the ladders with my friends until we got told off.
I too went to Hinchley Wood School......remember Mrs Pringle!!!! 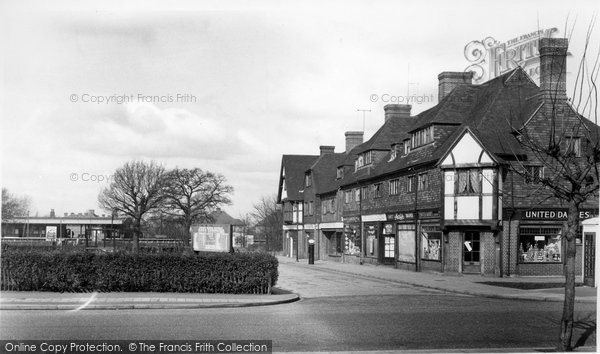