I first attended St John's in around 1958 as a Cub Scout and attended the children's Sunday service at, ISTR, 9.40. The 'grown-ups' service at 11.00 seemed very serious to me as an 8 year old! I can't remember how I got to know about the choir, it would have been my Father chatting to someone, but I joined as a choirboy around 1960. Mr Clifford Roberts was a charming but very serious man and a brilliant organist and choirmaster. The range of pieces we sung as anthems was truly amazing, and the choir of about six ladies, four boys, and about six men took on and performed every Sunday a different anthem as well as psalm chants and all the hymns (in full harmony, of course!). We used to practise every Friday evening, and Mr Roberts had laid out all the music for the coming weeks on chairs in front of the chairs that the choir would sit on. Each chorister had their own hymn book and psalter with their names on them. It was just before the practice one night in 1963 that we heard that John F Kennedy had been shot and when my Father came to pick me up for the walk home, notified us that the President had died. So I really do know where I was!
It was an honour to be chosen to carry the cross in front of the procession comprising the clergy and the choir emerging from the side door to the church, which, for the 11.00 service always seemed to be full. We also sung for the 6.30 evensong, and memories of the sun flooding through the west window during the service stays with me still. I stayed in the choir until 1968 when there was a considerable degree of acrimony with the new vicar dismissing Mr Roberts in what seemed to be a summary fashion. It was a very happy 10 years at St John's during my teen years and laid down a passion for music that has been with me ever since. In the photo above, the small door on the extreme left was the entrance to the church hall, and the door next to it, to the choir robing room and side door to the church. 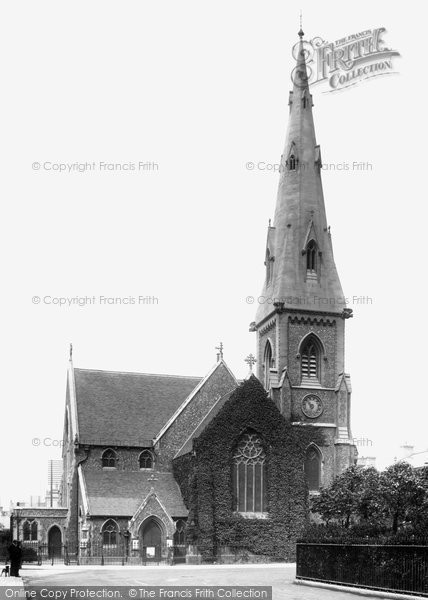 Hove, the Church of St John the Baptist 1898