The Bull - a Memory of Irthlingborough.

This scene in 2008 looks almost exactly the same as it did in 1969. Further down (out of sight of this picture) many changes have taken place. George Burton's papershop is now a pizza parlour (didn't even know what a pizza was in the early 60s!). Duncan's Chemist shop (famously made of wood) has been demolished, oh how as a youngster I drooled as I looked in his shop window at those wonderful blue and white striped Dinky toy boxes containing every car and lorry in miniture' Even when we were ill it usually meant a dollop of Lucozade (lovely stuff) from Duncan's. I can still remember the long glass bottle with a screw top and that wonderful transparent amber coloured wrapper which I can still hear to this day! It still amazes me as a feat of advertising and product image that during my childhood Lucozade was meant to aid recovery from illness and yet today it is targeted at fit athletic people. Mr Duncan always wore a crisp, starched white overall coat, looking every inch a man of the medical world and yet, all I ever remember him handing out was pleasure. The United Counties Bristol bus on the right would be waiting to travel to Kettering (route 413), it cost a penny halfpenny to travel up Finedon Road. The lorry centre right of the picture belonged to Townsend Carriers from Higham Ferrers and is a BMC engined Austin delivering parcels. The Bull public house to the left of the cross was the second pub situated on this site. My mother worked in The Bull when she was young. The original Bull was demolished before the war and rebuilt a few feet back from the road in readiness for the widening of the main A6 trunk road to the north but the effort was wasted as they decided to by-pass Irthlingborough altogether! The cross itself was moved during the early sixties to ease the traffic flow........ not that I can remember Irthlingborough ever being that popular that it resulted in traffic flow problems. God bless it! The cross became a meeting place for those poor unfortunate  chaps that were out of work during the hungry thirties. I'm proud to say I was born in Irthlingborough (although I don't live there now) and I have to say I still have fond memories of this lovely old place.

Sun Dec 14th 2014, at 2:49 pm
martin.day589 commented:
I lived in irthlingborough till1986..and have memories of a place just the bull known as the Glue Pot...The Con Club many a late night there discussing politics. I think....
Add your comment
Report abuse 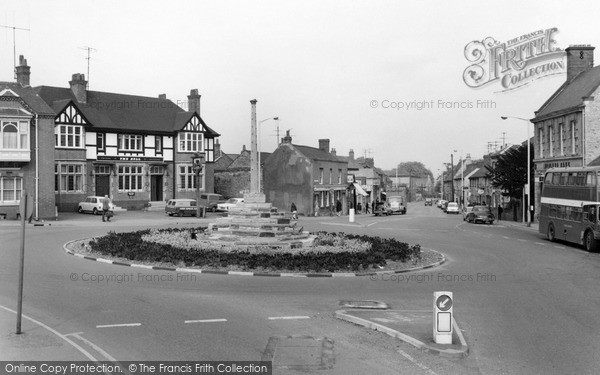