Preparing For The Festival Of Britain. - a Memory of Leeds.

This photograph shows a Wednesday afternoon, early closing day, hence the low volume of traffic and few shoppers. The year is definitely 1951. On the left is myself and my apprentice electrician seen manhandling the long ladder outside William Timpson's shoe shop. The other people are just members of the public stopping for a chat. I worked for a company who for many years had the job of maintaining the electrical installations at the two Leeds branches of William Timpson, and on this occasion, to celebrate the 'Festival of Britain' in 1951, shops in the city centre were invited by the various trade organisations to enter a competition to find the best displayed shop. We were illuminating the upper part of the building which involved fixing a light fitting at the apex of each of the two dormer windows, shining downwards, and two lights fixed to the shop fascia facing upwards. The ladder only reached the lower part of the roof so you had to scale up the roof and then crawl on your stomach along the ridge of the dormers and then try to fix the light fittings. The shop came third in the competition and the lights became a permanent feature of the building until it was demolished in about 1958. After almost 60 years in the electrical business, this task was my most terrifying experience, and I have told it many times before, now it is in print for all to see. 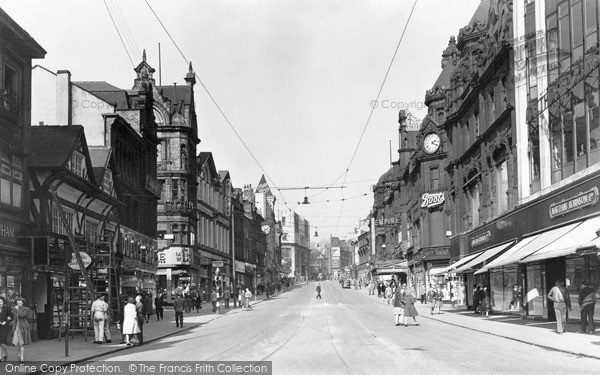