Family Buisness - a Memory of Leiston.

What a coincidence, as around 1910 the Smithy was owned and run by My Grandfather also named James ,(a family tradition) there exists a buisness directory in the longshop Museum ,listing many Leiston Buisnesses, showing a picture of the Smithy at that time, timber fronted and sign written with his name and listing the many services available a photograph at that time was a special occaision,and the picture shows My grandfather,his brother my Father as a 6 year old and the house next door where they lived shows my Gran Mother holding my Dads Brother. clearly up to date using advertising to best advantage, also he owned a heavy Horse which he would loan out to Farmers when their Horses came to be shod, just like having your car serviced today(foreward thinking or what)My Father recalled he would be tasked with taking the horse back to the field it was kept in, lifted and sat on its back and his father would encorouge the beast to lumber off,and as father remarked it was a good job the Horse knew what was expected of it,as if it ever chose to do otherwise there would have been little he could have done about it,but it would stop at the proper field gate and wait patcientley as dad half fell and half slithered of and opened the gate for it, walk in then lower its head to have its halter removed. 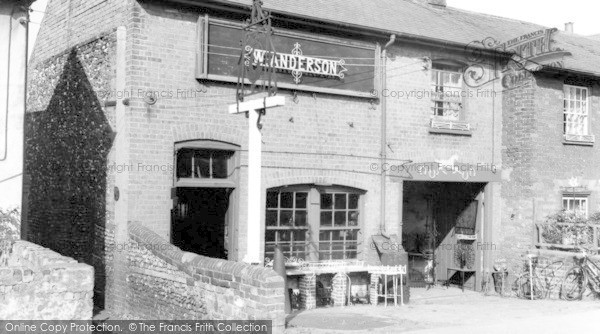