A Busy Street - a Memory of Pontycymer.

My mother Joan Marion Jones nee Gibson from Nantyrychain Terrace worked in the Home and Colonial Stores (on the right hand side of this photo) during the war and has many memories and stories, especially about rationing. She also knows many of the shops.
Starting on the left corner was Peglers (grocer) - now a Chinese, I see from another memory, then Morgan Hughes (ladies outfitters), Powell (butcher), Wellingtons (newsagent and greengrocer), Bethel Chapel with the British restaurant where Mrs Jones from Meadow St. was the Cook. (This later became a canteen for Garw Grammar School boys in Forms 4-6 who walked from the school to take their lunch here. I know because I was there! Mrs Fricker was the Cook then.)
Over to the RHS - Joe Polledri (Italian cafe) - he used to breed corgis and show them. Next a shoe shop kept by ? for whom Morgan Roberts worked. He later took over the shop and his son Clive still runs the shop, I believe. Hodges(men's outfitters), The Meadow (grocer), (Mr James, manager), then Rupert Pugh (butcher), Hughes the Jeweller, Home And Colonial, The Star (grocer), J.O Thomas (shoe shop), ? Martins (sweet shop and ice cream). 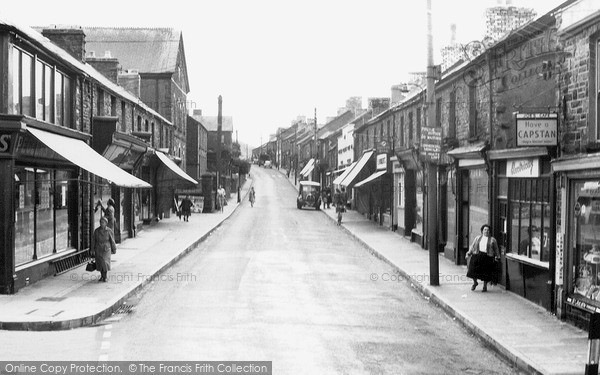