Though the summers were often cold and the on-shore wind very cold, it was great fun working as a lifeguard in the late 60s and early 70s at the Rhos on Sea Swimming Pool. In the mornings after sweeping the terraces and pool and emptying the litter drums, it was off to Sheard's deli in the village for milk loaves, filled with salad coleslaw and salami for breakfast and lunch.
Crowds would start to form at 10 on warmer days and sometimes we'd have swimming lessons to conduct before opening, the pupils being children from local schools.
Amazingly parents would often drop-off tiny children off for the day, expecting us to baby-sit in their absence. As a result, we'd often fish out youngsters in the water and out of their depth, and keeping our eyes on the water all day was quite a stressful experience. I remember we fished out more than twenty souls one Bank Holiday Monday, and thinking back now, we were very lucky not to lose a single 'client.' So while many regarded the job as a pool attendant or lifeguard as quite a perk, the fact was it was hard work, physically and mentally.
At the end of the day, we'd close the pool at around six in the evening and repair to The Galleon Bar at the Rhos Abbey Hotel for a pint or two before heading home.
In those days you could say that the pool and its extensive sundeck - about 20 feet to the right of the diving boards in the picture - was the centre of summer life during the day, while the galleon took over in the evening.
One day in 1970, I think, a child on a Lilo had been blown way off shore and his desperate parents came to the pool for help. Ian Roberts, a fellow 'lifie' and I ran across the promenade and entered the water off Rhos point, clearing the old iron railings in a dive and swimming for what seemed like a couple of miles - though it probably wasn't. We got to the boy, and towed him back to shore one behind the Lilo and the other with the device's rope in his teeth, swapping places several times on the way in shore. We were on the front of the North Wales Weekly News that week - something about 'Bronzed lifeguards in runaway rescue of Lilo-boy...' though the black and white picture did our uniform orange Speedos no favours at all!
We didn't buy a drink for a week.
I live in New Zealand now and often think of my four great summers at the pool, with fellow lifeguards, Gil Vaughan, Chris Brannigan, Hayden Roberts, Ian Roberts, Richie Pugh, Mike Salt, Mike Robinson and Peter Wilson, and manager Harry Haild, who had the driest sense of humour I've ever witnessed. The Abbey staff were fun too, with former lifeguard, Benny in the kitchens, and Dave Abbott and Paul Sullivan behind the Galleon bar. The Sheard family at the deli were great as well, especially when each morning we'd walk around from the pool on 'Breakfast Detail.'
I've been back several times during the past 40-odd years, and I'm sad to note that the pool and the hotel are long gone now, as is Sheards, sadly.
I had a quick beer in the sailing club on the promenade last year, passing through while working for a week in the UK, but saw no-one I knew from the old days.
Anyway, I have lots of other memories about those times, but they can all be saved for another time.
If anyone remembers me, or those times in Rhos during the late 60s early 70s - G'day to you all from New Zealand... 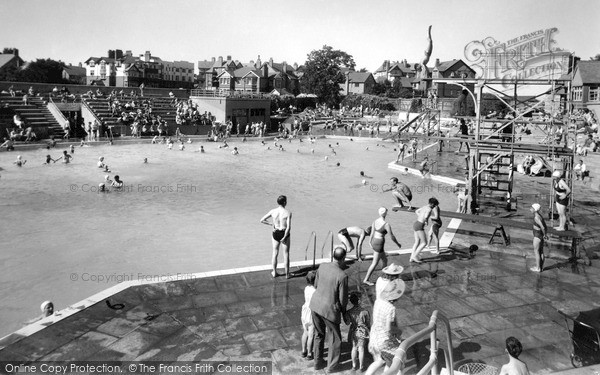