Cherished Memories - a Memory of Southerndown.

My mother, Nancy Owen, was born at 'Slon Cottage' in 1906. Her father, John Richard Owen, worked for the Booker family of Slon. The Bookers originated from Velindre House, Cardiff. Nancy Owen's mother was Mary Ann Owen (nee Cosby) of Merthyr Mawr. She met her husband to be, John Richard Owen, when she was postmistress of the Post Office at Merthyr Mawr and he, John Richard Owen, worked for the Nicholl family, who owned the Nicholl estate at Merthyr Mawr. The Bookers were a kind family, who gave private education to my mother via their governess, which helped her to become a nurse. Her mother, Mary Ann Owen, was in the Red Cross during the Second World War, along with the Booker girls - and they worked at Brig-y-don and St.Margarets. There were only 3 houses along Slon Lane in 1901 - being Slon, Slon Cottage and Sandy Mount. During the 1950s I fondly recall trips to Ogmore-by-Sea (its name was changed in 1920 from Southerndown to Ogmore-by-Sea) with my mother, and she would tell me of her childhood there. Precious memories which become more so the older I become. 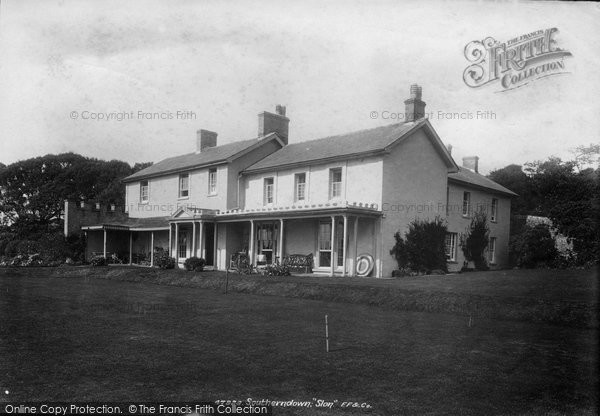