Reflections Upon The Changing Face Of Stafford Since 1964 - a Memory of Stafford.

It’s a rather sad fact that you only come to appreciate a town several years after you have left it. At the age of 19 I was sent to live and work in Stafford between 1964 and 1979, before the Main Street was fully pedestrianised and it’s much maligned traffic relief ‘ring road’ scheme was devised and tortuously introduced. It was a time when Stafford still strove to be a proud and thriving County town reflecting its diverse rural and industrial heritage, boasting many varied shops of interest and character. Many of them were successfully run by several generations of local families, such as Burgess’s Hardware and Garden store and Blenkinsop’s Chemists in Bailey Street and Wolverhampton Road, TA Rowney and Son TV shop and Tom Reekies Camera Shop in Bridge Street, Peter Roger’s Camera and photographic shop in Mill Street and many had more than one shop premises in town. Pickup’s Radio and Electrical Shop in Mill Bank ably served the electrical needs of the people of Stafford for many years. Freddie Sandy’s Bridge street Car park Cafe grew into a popular and trendy Coffee bar in Newport Road and further expanded his catering business in Church Lane, with the popular ’Soup Kitchen’. Carter’s Taxis operated from the Taxi ranks in Market Square and by the Guild Hall. All were mostly run by local people with a long term interest in the town.

I remember several traditional and delightful shops in Greengate Street that still retained their old interiors with wall lined stock drawers and a central Cashier’s booth handling all the cash transactions from the shop counters sent by pulley system. Woodall’s Drapery Shop staffed by knowledgeable mature ladies and the Home and Colonial Grocery store with it’s strong aroma of freshly ground coffee wafting from the entrance. Smart shops like John Mottrams next to The Bear PH and Madam Moores, Superior Ladies fashion shop, on the banks of the river Sow served by very elegant young girls, Jenkinson’s Bakery, Cafe and Cake shop in Greengate Street and many more spring to mind. In those days small punt like boats could be hired operating on the river Sow from under the arches of the Brine Baths before it finally silted up. Charles Clarke Garage at the north in of town (where stood Goal Square Clock tower, now moved side to accommodate the ring road and Attwood’s Garage at the south of town (opposite the White Lion Public House, demolished in 1976) marked the ‘beginning and end’ of Stafford’s historical Main thoroughfare.
An old fashioned Builders merchant store FH Burgess on the corner of South Walls (opposite The Royal Brine Baths) where you could buy anything from a boat hook to a barrow. Following a major fire I saw it being demolished in 1966 and the site re-developed, later to become the ‘Co-operative Permanent Building Society’ when it moved from the Newport Road (later transformed to Abbey National Building Society, one of many that sprung up in Stafford at the time. It was here I got my first mortgage granted personally by the Manager, Mr Ken Wheatley in 1967, it not so easy to obtain in those days.

I have now realised just how many other important personal memories, all came to be directly associated with Stafford. It was here I met my wife, the town where we married at the Registry Office in 1968, set up home at Baswich and where our children were born, brought up and spent their early life. They were Christened at Berkswich and Walton Churches and first each attended school at Baswich Infants and Juniors where they had fun and made many friends. Henry Burton’s Cycle shop in Mill Street was the place where I bought my first ‘new’ bike in 1973, during the OPEC Oil crisis when the price of petrol went up 400%, hoping save on cost of using my car for travel to work in Bath Street behind, Stafford’s old Indoor Market Hall (since demolished after we left to make way for the new Guildhall Shopping development and car parks)

I used to police the streets of Stafford on foot, in an effort to keep it a safe place to live and I daily saw the town’s changing pattern as each day passed into night, over a period of several years. During which time I got to know the people, businesses and ‘scoundrels’ of Stafford quite well. It was a time when the town underwent great structural change. Old houses in Newport Road, next to the Grapes Public House were demolished to make way for ‘The Top of the World’ Dance hall, where later rows of excited girls and their boy friends stood patiently queueing on the pavement outside to gain entry during big events when some top groups were due to appear on stage. It was town’s meeting place where many couple’s started their life together.

Stafford’s Police Constable’s patrolling the Main Street had just 2 Police Pillar boxes, positioned at each end of the town (by the Library and on Gaol Square corner) with flashing lights on top, to indicate an urgent message from the Police Station required to be ‘promptly answered’. As patrolling ‘Bobbies’ we were expected to respond to them within 15 minutes, so always ensured we were within ‘line of sight’ of one when ever possible. The pillar was fitted with a public door with a microphone and speaker fitted inside for Emergency calls to be made directly to Police Station staff on duty.

It took about 30 minutes to walk from one box to the other, but around Market Square they were out of immediate sight, due to a slight incline and bend in the road. The Main Street was not flat, it inclined gradually to Market Square. At night we knew where to stand to be able see the flashing lights of both police pillar’s indirectly reflected in the front shop windows when clear of people and traffic, From experience, at any particular time of the day, we knew where to stand inconspicuously and when to ‘expect trouble’. ie. when the Public Houses or Dance Halls closed. It was a ‘predictive skill’ of discretely maintaining peace and public order. We were expected to deal with it all mostly on our own, without the need to call for ‘backup’.
We had no radios then and I well remember taking part in the early trials of personal police radio’s fitted with heavy cumbersome large back packs and unwieldy whip aerials. At first they were sketchy and very unreliable, but worked alongside the more traditional Police Pillar box flashing light system. Several police pillar boxes were strategically positioned throughout the town and beyond into the lonely suburbs, but always near a Public House e.g. at Doxey, Sandon Road, Marsden Road, Stone Road, Wolverhampton Road, Weston Road, Rising Brook and Riverway. They formed the basis of the ‘Police Point watch system’ where, on the hour patrolling police officers were scheduled to ‘Call in’ to the Station to report their progress and confirm ‘All was well’ on their beat. We customarily walked upwards of 15 to 20 miles during an 8 hour shift on foot and in all weathers.

The town had a pride in itself as the Administrative centre of the County with its then Assize Court Parades and annual Processions, when all the town’s young volunteer groups, supported by the band of RAF (Stafford 16 MU) marched together the procession was long enough to fill the entire Main Street on the occasion of the Lord Mayor’s Remembrance Parades.

On eturning now, I see that Stafford certainly has changed, apparently in the ‘name of progress’, but not necessarily for the better with the passage of time. The old shops, taverns, character’s and quirky buildings have nearly all gone and somehow, it seems the ‘soul of the town’, as I knew it, has been torn away with them, more’s the pity. Fortunately some of the small businesses still remain, but most have gone, their former busy shop fronts and doorways now fill with rubbish, lie empty, their windows vacant and are now inhabited only by the ghosts of their more ‘characterful past’.

Sun Feb 21st 2021, at 6:11 pm
Alan Lucas commented:
I too was born there in 1956 after my parents and siblings returned from 7 years in Ontario Canada where my dad worked for English Electric as a draughtsman. I believe several other families whose fathers worked at English Electric had also emigrated at the time. Like you I left in 1979 for the Potteries, where my paternal grandmother was from originally. She moved to Stafford with 3 young children after ww1 and after my paternal grandfather had died aged 28. I have no family there any more and the town certainly isn't what used to be.
Add your comment
Report abuse
Sat Dec 21st 2019, at 11:07 pm
nimrod01 commented:
I’ve now recalled that Peter Rowney’s ‘right hand man’ was called ‘Mitch’. He was cheerful and always very helpful.
Add your comment
Report abuse
Sat Dec 14th 2019, at 9:52 pm
nimrod01 commented:
Hi Paul
We’ve almost certainly met at Rowney’s. I was a regular customer in your time there and I remember Peter Rowney had an Assistant whose name currently evades me, who ran the shop in Peter’s absence. I bought a push button Motorola car radio in the late 1960’s and my first colour TV in the 1970’s. Peter used to hold regular Colour TV demonstration evenings to invited customers and served coffee and biscuits to promote TV Sales. Colour TV’s were quite uncommon in those days and required degaussing on installation in the home. It was a mysterious process involving magnetic alignment of the colour guns inside the TV screen.
Add your comment
Report abuse
Sat Dec 14th 2019, at 7:20 pm
paulstevens56 commented:
So true Nimrod01,
It is strange that you dont miss a place until you leave. I was born in Stafford in 1956 and left in the region of 1979 returning to see it change when visiting family. English Electric, Dorman Diesels Henry Venables. And Saniford Trading .I used to work for Sandiford Trading and T A Rowney as a trainee TV engineer. I met a lot of great people i Stafford including my first love we did not last but she gave me the confidence to move on. Still miss the place.
Add your comment
Report abuse 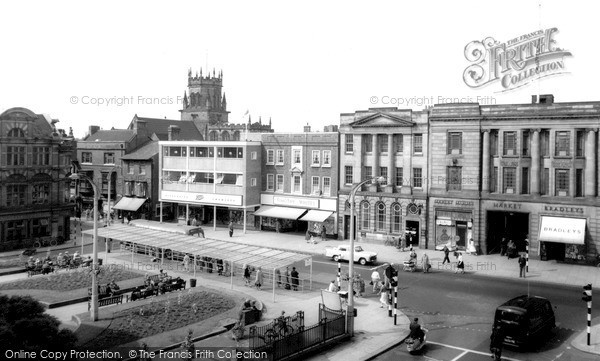