The Library - a Memory of West Byfleet.

I don't know the exact year the library was built in West Byfleet, only that it opened the flood-gates for me & I would be the first to campaign against closing libraries, thanks to this inclusion to 1960s West Byfleet. The fact that it was circular encompassed that feeling of 'modernism': I was able to wallow in so many stories, fact & fiction, all for free!! It even lent LPs to play on my little Dansette portable record player!
The offices in the background of this photo replaced a beautiful row of houses, one of which I think had its front room servicing as a doctor's surgery: or it could have been the dentist. Although at the time it seemed criminal to demolish these places, the offices served me well for some temp work during college holidays!
Further back was our first supermarket: The notion of collecting all your items in one basket rather than asking an assistant was scary but wonderful! I remember following my mother inadvertently putting an item in her shopping basket rather than the supermarket one. She was so flustered when I pointed this out.

Fri Jun 19th 2020, at 4:58 pm
Julia Edwards commented:
I was born and brought up in West Byfleet in the 1950s and 60s; until 1956, we lived in the Close. I remember the library and office block being built; I'm not sure of the exact date, but it was probably in the early 1960s. I remember there was quite a fuss about it - people didn't like the circular shape, they thought it was too modern!
The former building behind it was the Sheer House Hotel (mentioned by someone else on this site in his memories of the 1950s. My grandparents used to stay there when they came to see us, as there wasn't enough room in our house. On the other side of the road, where Waitrose is now, there were 2 large houses, and our dentist, Mr Cross, had his surgery in one of them.
When the new office block was built, it included a car park on top of the shops near the library; it was a wonderful place for cycling, especially at the weekends.

Add your comment
Report abuse
Mon Jul 15th 2019, at 12:07 pm
mcvirgo commented:
Unfortunately, the classic 1960s buildings seen in this photo (including the iconic library) are all going to be demolished and there are controversial new plans to redevelop the site and replace it with three modern high-rise, mixed-use blocks. Clearly Woking council have no concept of the architectural heritage of West Byfleet.
Add your comment
Report abuse 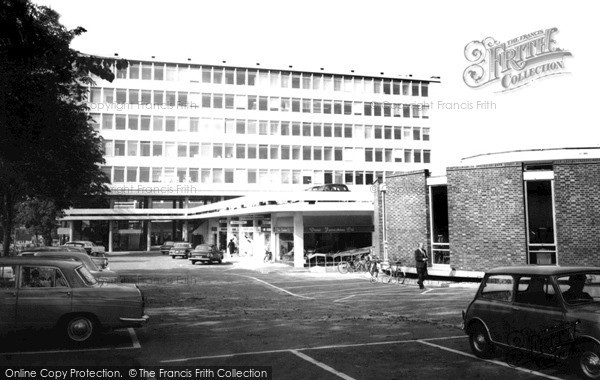