I remember my first home in Westbury Leigh was with a family called Rowe, they seemed fairly old people to me (then a ten year old boy) but now I am eighty I don't suppose they were. One of the brothers, a Charles Rowe, owned two cinemas, the Vista in Westbury and the Palace in Warminster, and I was allowed as a treat to go to the Saturday morning children's show.
The second family was Mr and Mrs Sampson, he owned the barber's shop next to the road leading to Dents glove factory and near to Elkins garage, so I got free haircuts from Mr Sampson, not so good as free pictures. I was then moved again, I was too much I suppose for Mrs Sampson, to a family called Cornish, he was a train driver on the Great Western Railway, they were good old steam trains then, no free train rides on the footplate though.
My next home was with a family called Mead. Mrs Mead had two dissimilar twin boys, Tom and Ted, a daughter, Sylvia, another evacuee girl called Doreen, the house was at No 2 Sandy Hole Lane nearly opposite the Phipps Arms pub. I wonder if the house is still there. I had several jobs over my time with the Meads, paper boy in the village, and for W H Smith in Westbury, I delivered bread for the baker on a delivery tricycle with large box-like container with shelves for the bread at the front(I crashed it once), it was lovely bread, none of this sliced and wrapped rubbish we get today.
I also helped the local tally man draper,we used to travel round in an old Morris 8 car, how he got petrol for it I don't know. I joined the choir (see my other post on this). I did originally attend the junior school before moving on to the senior school in Westbury. One memory that sticks with me of the junior school is of the dentist who used to set up his drill in one of the classrooms, it was not a modern drill but one that was operated by treadle like an old fashioned sewing machine.
Whilst living with the Meads, because Tom and Ted were in the Army Cadets I put my age up and joined, I think I must have been about thirteen at the time. I remember we went to camp at Brean Down near West Super Mare, our dining mess was in a cow shed and I kept being sick because of all the cow poo all over the place. Ah happy days. What else do I remember? Keeping pet rabbits, the sand pit in Sandy Hole Lane with all the sand martins nesting in face of the pit, scrumping apples in the orchard down the lane by the pub. Of course there were a lot of American soldiers based in a big mansion in the village (at least I think it was a big mansion). There were also some Italian prisoners of war there, they used to carve snakes on withy sticks taken from the withy beds and make lovely walking sticks from them. I also vaguely remember there was a leather tannery in Dilton Marsh and the waste water used to go out into a stream, it did smell.
If any person reads this can remember this time 1940-1944, please leave a message through the Francis Frith website, Tom or Ted Mead, Micheal Elkins I remember and I would like to hear from anybody else out there who is still alive.
Robin Porter, 11th February 2010 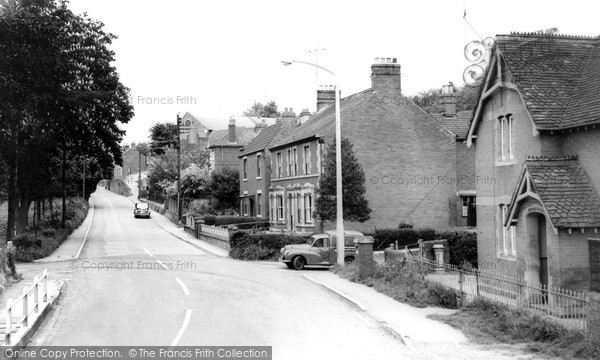