I have a picture at home with my great-great-grandmother feeding chickens by the trees on the left taken around 1880. My great-great-grandfather, Joseph Smith, was the village wheelwright. I have relatives who have lived in the village back since 1780.
I was best friends with Vincent Small and Clive Curtiss. We used to ask for small cardboard boxes from the Co-op, and then kick them like footballs all the way home. Our heads were full of football from the age of 8.
The primary school was half full of Polish kids from the former R A F aerodrome. The teachers were not particularly good. Hatton, the headmaster, told us we were rubbish, and Stan Ratcliffe, who owned a V W beatle, rammed classical music down our throats. He lost his temper a lot and ranted and raved but Vince and I realised that if you talked to him about Stoke City he quickly calmed down. I remember there were no after school clubs, no school teams, sports days or school trips. In short it was rubbish! The paper shop was run by a man called Pollin, who I think was German.
There used to be a lot of cows walking into the village for milking but that changed with the new houses being built in the 196's. We used to play football in Marstons field, the one opposite Fentonhouse Lane. With those steep ridges of what I now know is an Anglo-Saxon field pattern, it proved very challenging.
Clive's aunty (Babe Bevan) was the same age as my dad but she had Downs Syndrome and Clive and I would often get her to knock on people's doors, especially Vince' s house which was Trevitt House.
My last year at primary school was however my happiest time at school (Wolves did get promoted as well). At secondary school I went to the dreaded Grammar School, no football, short trousers, lots of homework, long bus journey, I hated it from start to finish. None of my male friends went there, and at first, the bus was full of townies and worse still ...girls. As time passed I realised they were OK and eventually married one (a girl that is).
At 12 or 13 we were allowed to go to the Youth Club. It was held in the village hall on a Wednesday, and Martin Jones banned my Neil Diamond record (thank goodness) on my second visit - "Only Motown and Reggae music here" - what is that I thought!
Does anyone remember Cyril Williams, the chess playing Vicar?
I remember we always got hammered in the 5 a sides at Wombourne but won the quiz competitions. We often damaged the walls of the hall playing football but banned it when we had our own revamped hut in Dirty Bridge Lane. We were very proud of that hut and I still have the picture of a young Patrick Cormack and I planting a tree when it was opened, they were good times. Our dress code was short hair ,Tonics, parkers, crombies, harringtons, Brutus check shirts etc. On Saturdays it was down to the Wolves and then to the discos at Brewood, and I soon learnt what Motown, Reggae and Northern Soul music was. After Brewood youth club one night we all egged on Sid Thomson to climb the lamp post in Brewood Square, just as he got to the top the coppers turned up and asked him if he thought he was batman! And don't forget the Poachers Union, half of which lived in my street at Badgers End. Why did so many people have nicknames?
At 14 Paul Evans (Pev) moved to the village, the first person I knew who had ever been on holiday abroad. We thought he was so rich to be able to go to Lloret del Mar. We used to travel to Cornwall and it took 12/13 hours, I now drive to the French Alps in winter in the same time. How times change!
After an indiscretion with a young lady from Penkridge I was forced to forsake Brewood for Gnosall. After the initial shock of realising there were a lot of 'Greasers' in the village and being saved from being beaten up by several of them by 'Nipper Smith', I soon warmed to their youth club, disco and most of all their youth football team and a rather pretty half Italian girl called Shirley Bassegio. I have since discovered that both these passions run in the family. Even happier times.
Whilst there were lots of Smiths and Whittinghams (it is Wheaton Aston after all) we all had grandparents, aunties, uncles and cousins all living close by. I had 14 within 3 miles. How different today, I live in Telford, my son lives in Vienna in Austria, my daughter lives in Kingston in Middlesex. I now have only one cousin, an aunt and my sister there and I have only one relative within ten miles of where I live. 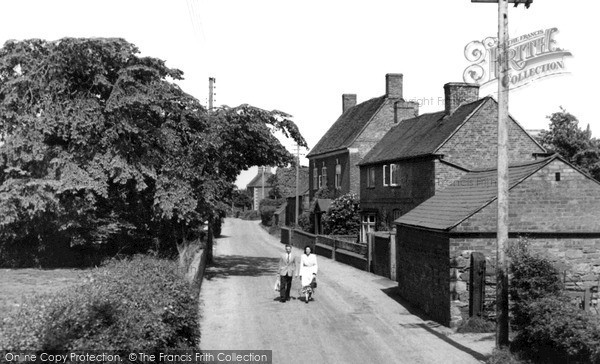