Childhood Memories - a Memory of Wickford.

Although I am relating to a time a little earlier, around mid and late 1940s, the scene in the photo still resembles the countryside as I remember it. Wantz Corner branched off in three directions, and for me, all leading to aunts, uncles and cousins, living in the area, fields to roam and play all day, haystacks to build tunnels in (I can't ever remember being chased away by a farmer), and of course school. I lived in a little unmade road called Gordon Road just a short distance from there, off Swan Lane (my front garden was a corn field) , the road in the photo, going straight up was then called Churchend Lane, and when I became older I went to a Youth Club situated just a little further on around that bend (it was only in a Nissan type hut but they had table tennis and I think a dartboard, and you could get a soft drink). I also recognised the railing on the right hand side of the picture (that spanned a ditch), I and friends would play there. The road of to the left I believe would have been Brock Hill, there was a bus stop there, and my mother would put me on the bus, I think one came along every hour or so, a single decker of course, which would travel the lanes through Hanningfield, Stock etc and she would tell the conductor to make sure I got off at a certain stop in Chelmsford, where I had a cousin living, and would spend many weekends staying with her and my other cousins. (Unfortunately children now do not have the same safety and freedom to roam). The whole of the area around Wantz Corner has now changed beyond recognision. Where there were fields and haystacks there are now houses, cars etc. I only recognised the scene so well because of the railing spanning the ditch and playtime memories. 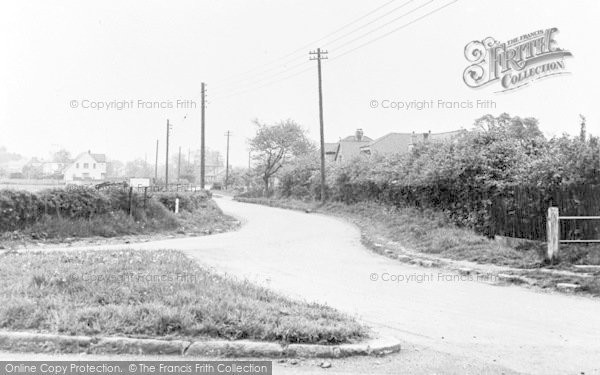