The Cabin - a Memory of Wealdstone.

The Cabin in Graham Road was a school boy's (and girl's) dream! At the front of the shop, behind the counter, was an array of jars of sweets, sold by the quarter (lb) and every other piece of confectionary or chocolate you could name: Black Jacks, Fruit Salad, Shrimps, Flying Saucers, Sherbert Fountains, Palm Toffee (banana flavour the best), Flags of the World bubble gum, liquorice sticks, etc. In the summer, the front hatch opened up, so you could buy ice creams, Jubblies and Sno-frute ice lollies without having to go inside. Bottles of Corona, Tizer, or R.White's lemonade drinks sold there gave 3d back on the empty bottle. At the back of the shop was a working man's cafe; just a few tables and chairs and a good English fry up of eggs, bacon, tomatoes and fried bread. It was also the area in which I let off a large stink bomb, purchased from a joke shop in Harrow, which vacated the premises in next to no time!
And this memory is personal, as the photo also shows my mum and I, with our old spaniel outside The Cabin in 1960!

Sat Apr 11th 2015, at 8:26 am
ssnowball commented:
After a lot of ballyhoo, in getting me to agree to my photos being the property of Francis Frith, I see they are now not on this website! The photo that accompanied this article and the photos of Wealdstone High Street are no longer available. I wonder why?
Add your comment
Report abuse 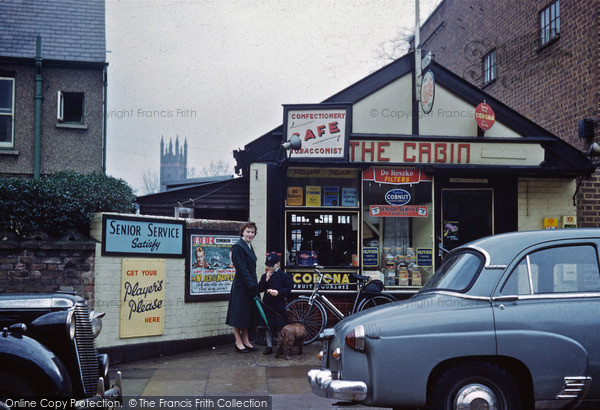