Mitchell Family - a Memory of Widnes.

I do not have a memory to share, but hoping you may share some with me. I am researching my family tree and I had a lot of family members from Widnes.

In 1881 he lived on Back Lane, Cuerdley, with his brothers Thomas and John. The were all Farm Labourers.

In 1891, he was married to Ellen Brown from Widnes and lived on Walmsley St, Widnes. He was a Chemical Labourer.

In 1901, he still lived on Walmsley St, Widnes. His brother Thomas lived with his and they were both Chemical Labourers.

In 1911 he was a boarder in a house on Wellington St. His wife Ellen died in childbirth in 1907 - At this time he was a Furnace Man Labourer (Chemical). His 17 year old son Thomas was a Labourer, Alkali Works.

He lived there with is Children ...

Nicholas Mitchell (born 1904 - died 1993) married Francis Payton in Manchester (My Nan and Grandad)
They had 2 sons, John and Thomas Mitchell, in Manchester

I know this is a lot of information to take in, but the census stops in 1911 and I am curious to know if I have relatives/cousins still living in Widnes. Or I would love to hear if anyone from your group knew of any of my relatives and have any tales to tell.

Fri Jan 8th 2021, at 2:53 pm
David Glynn commented:
I've just come across this post. George Glynn is my great uncle. I'm currently doing a family tree so finding this information has really helped. I now live in York but my Brother still lives in Widnes.

Add your comment
Report abuse
Wed Feb 20th 2019, at 11:13 pm
dodi.m2060 commented:
Would there have been a William Mitchell in your family, My great grandfather William Mitchell came from Co. Mayo, married Anne Robinson , they lived in 15 Milton Street, Widnes roundabout 1884.

Add your comment
Report abuse
Wed Aug 16th 2017, at 8:41 pm
thebrassingtons commented:
Hi. Your are referring to my family. Your Auntie Nellie that you refer to was my mum. My Father was Francis Brassington (Frank). He would be his birthday on 18th August (born 1921). He died on 2nd January 1921. My Mother was Ellen Brassington born 0n 14th February 1923 & died 1st September 2012. My name is Paul Brassington & I have an older sister, Linda Bennett and 2 older living brothers Stephen & Christopher (also Colin who dies in 1975). I live in Warrington as does Stephen but Christopher still lives in Widnes. We all have children. My mum had a brother Walter, who died of cancer in 1998, having never married. His father Walter died when I was ten & Nellie Monaghan lived until she was 84 (sister of Nick Mitchell). I remember Uncle Nick & Aunt Nellie (your nan and grandad) & went to both funerals. There are Glynns in Widnes and Joan Glynn unfortunately died in the last few days. Her funeral is on 31st August. I hope I have shed a light on your relatives and let me know if I can help further. Paul B.
Add your comment
Report abuse
Sat May 13th 2017, at 7:14 pm
Mary Hines commented:
Hi Lois-Rae, I used to live in Blundell Rd, 1948 till I married in 1974 can't remember the Watts family though I knew people in Nicholas Rd as it was at the corner of my road, just noticed when they left for Australia I would have been 9 that's why the name isn't familiar I will ask my godmother as her dad had the Newsagents/post office at Chestnut lodge and she knows so many people I remember Bromleys he had school of Motoring, also Reivelys and Edwards family some of them were called Fairbrother as their mum married more than once my name was Mary Rigby
Add your comment
Report abuse
Mon Jul 25th 2016, at 10:05 am
lois-rae commented:
Hi my name is Lois shore, my mums family lived in Nicholas Road, Ditton. My grandad was called Joseph Watts (Joe) and my grandma was called Ethel Watts. They had 4 daughters Margaret, Jeanette, Lesley and Lois Watts. In 1957 they all left for the new life to Australia, and I'm Australian myself has my mum Jeanette married another pommie in Australia in 1966. I'm sat in my auntie Lois house chatting bout memories etc does anyone remember the watts girls or even my grandma and grandad.
Add your comment
Report abuse
Mon Jul 4th 2016, at 8:41 pm
Jackie Worrall commented:
Sorry, forgot to mention, we were young teenagers, maybe 14 yrs old. I think Pat went to St John Fisher Moore school. I went to Wade Deacon, so we had no other mutual friends from school
Add your comment
Report abuse
Mon Jul 4th 2016, at 8:37 pm
Jackie Worrall commented:
Probably not the same Mitchell family but my best friend in about 1952 was Pat Mitchell. She lived in Edwin St in Widnes, with her mum and dad.
To my recollection she had no siblings, and I'm afraid I can't tell you any more. Just thought any link, however tenuous might help.
.
Add your comment
Report abuse 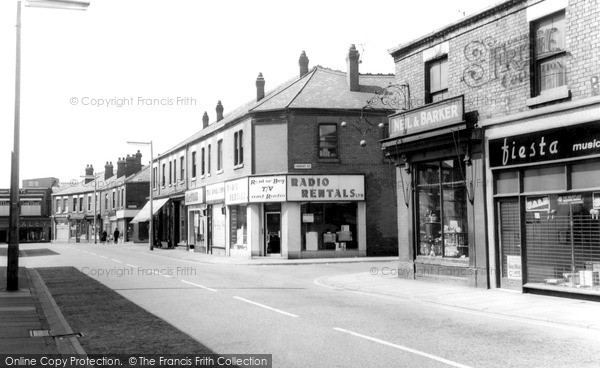