Lofthouse's Newsagents - a Memory of Worksop.

So I see it now again after so many years the shop on the corner with that sign Lofthouse's Newsagents above the entrance I went under many times to collect my comics hot from the presses of D.C.Thomson of Dundee: Beano (Thurs), Dandy (Tues), Beezer (Tues), Topper (Fri), though not The Wizard, that was mostly words not images paid for me by my dear late Grandmother Annie Turnill (nee Flint) of 15,Manvers St.
Mr Lofthouse, the man with his name above the shop doorway, I don't remember him smiling very much if ever. I remember a man with spectacles, a balding pate and maybe I'm imagining this as its so far out of our experience nowadays, a fag in his mouth and probably coughing to boot. He did not look the healthiest of men.
I was not an Dan Dare "Eagle" man, the Mekons on Wednesday had no hold on me and I never ever did get into SciFi. DC Thomson Comics reigned in my world. (Later in life I was temporarily to confuse the comic DC Thomson with Roy of the Times (tho not of the Rovers) Thomson)
Though Lofthouse's Newsagents was on a junction with a main road I had no main road to cross as I approached from Gladstone St though Gateford Road looks positively bare nowadays with not a single car in view though if you look carefully on the right you can see the steeple of St Johns.
This was where, when attempting to cross the road at that point, I nearly met by maker at just around the time of this photo in 1955 by, for some inexplicable reason, walking in front of a Ford Van whose driver had no choice but to run me over.
How any part of my anatomy, especially my head, wasn't crushed at that moment I can only thank to chance ( I am an atheist after all and I don't think that God was on the lookout for me perched on the steeple of St Johns Church).
Thank goodness he didn't try to swerve as he might then have done some damage. I didn't get knocked out and lose conscientiousness but found myself near instantly horizontal completely underneath the van. I stirred and looking outwards towards the kerbside tried to move myself but in moving burned my bare leg (of course I was in short trousers) on the exhaust. Shouting was heard from people I could only see the feet of. I can't remember how they got me out. Presumably I was able to slowly move being careful not to burn myself on the exhaust as I was in no pain from the initial impact.
The Ford van driver was beside himself and more upset than me as he held me in his arms. There wasn't a large crowd around the accident and I was asked where I lived. I told him my Grandmother's address at Manvers St and was taken there, the short journey I have no memory of. I think he would have had to call out a Social Worker these days to make sure I wasn't abused on the journey or abducted.
My Grandma was at home (I'm not sure she ever went walkabouts during the time I knew her) and my Auntie Kath (Milnes) was visiting from Sutton-cum-Lound.
A great fuss was made of the wounded warrior and this seemed to have set the pattern so far in my life that I get the huge slice of luck when it comes to life and death issues but in everyday events the bread always falls jam side up.

So I never did get to show my Uncle Fred Turnill's massive allotment on the Turner Sand Quarry (the reason for the journey's route) site to Ian Whitehouse, my companion at the time of the failed road crossing and someone who, thankfully, had too much sense to race out in front of a vehicle fast approaching.
So survival intact against the odds though Mission Unaccomplished. Sounds like the story of the rest of my life.

Sun Aug 13th 2017, at 8:36 pm
susanbetts24 commented:
We used to buy comics and sweets took our pop bottles back to jimmy woods got some money off them to buy sweets.
Add your comment
Report abuse 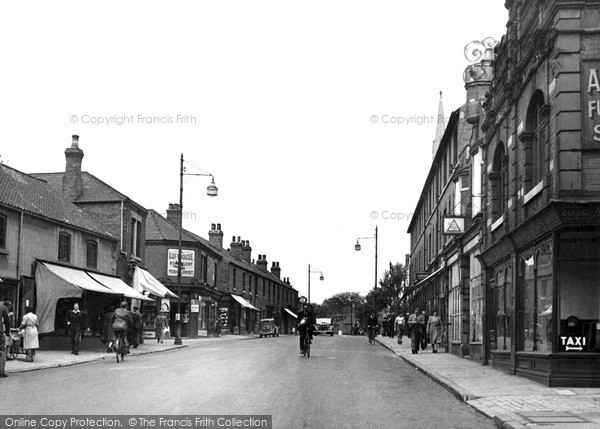