Update:Mystery Solved!! - a Memory of Amersham.

To Whom It May Concern:
I am an American living in the state of Maryland.  I've had a picture in my office for quite some time now, that I recently took a better look at.  Originally, I was told that this picture was of the city of Rockville, in Maryland, during the late 19th century.  Upon closer inspection though, the picture has a pub by the name of 'The Hand 'n' Hand Wellers' and below that the sign reads, 'Amersham Ales'.  That made me do some research and I'm now writing to this web site to find the answers to my questions concerning this picture.  What year was it taken?  Is that really St. Mary's in the background?  Finally, was the pub a business that was owned by the same group or family that owns a lot of different Weller businesses and other establishments now?
I've viewed several pictures on this site and I believe the St. Mary's Church picture, circa 1955 is the biggest clue that I currently have to go on.  That church appears to be the same one that is in the picture that I have.  I'd like to be able to scan a copy of the picture I have and e-mail it to someone, but I'm not sure to whom.
If anyone is able to help me with this issue, please contact me at: myronmorrell@hotmail.com
I would really like to find out the story behind the picture that I own.

UPDATE:  Thanks to all of the kind people whom have responded to my post concerning the picture that I have.  I erroneously thought that the picture was of St. Mary's Church in Amersham England.  Thanks go to everyone who responded, but in particular to Ross, Denise and her husband.  With their help, I discovered that I had a picture of Pinner High Street in the County of Middlesex, Northwest of London.  The church in the background is that of St. Mary's Baptist Church.  The name Weller's was that of Edward Weller, who was the owner of the local brewery.  He died in 1890.  The picture was taken sometime between the late 1860's through the early 1900's, but that is only a guess.  My wife, who teaches photography, was also able to determine that the picture is just a copy of a an old picture.  Therefore it doesn't have any monetary value, but does make for an interesting conversation piece.
Thank you again to everyone who responded and assisted me with this question.  I appreciate the time that everyone took and again, would like to extend a big THANK YOU!!  At a later date, I will be sending a copy of this photo to a historical society in Pinner, to get further input.  I will then update my post with any new information. 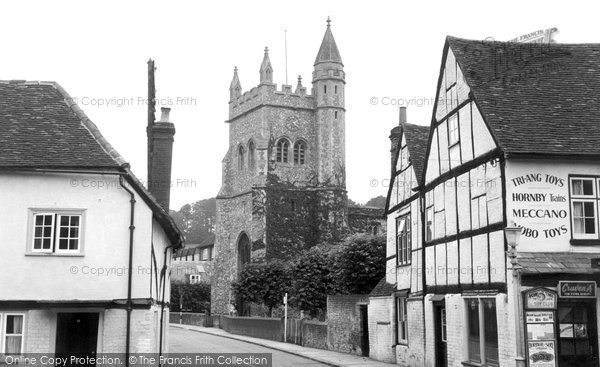