This selection of memories contributed to the web site and photos speaks strongly to the wartime spirit so synonymous with the British nation. They include evacuee memories of life in rural Britain and accounts of what it meant to "grow up British" during wartime.

Don't forget we welcome your own memories and please feel free to add comments to any that resonate with your own experiences. See 'Memories' from the main menu. 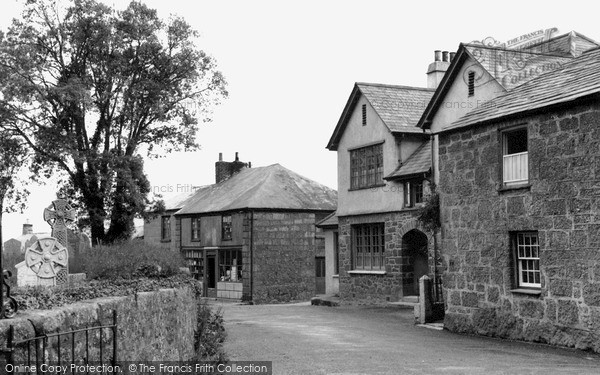 Evacuee In The Beautiful Village Of Luxulyan

I was very fortunate to be evacuated to this beautiful village at the beginning of World War Two. I remember being lined up in the village hall with about fifteen other evacuees. My elder sister was with me, she was eight years old and I was five. My future mum and dad were to be Mr and Mrs Parker. I can't find words to express what wonderful and caring people they were. I stayed there for about four years, during that time Mr Parker passed away. I still have fond memories of standing by the graveside holding his beloved dog Patch.

My mother and father came and joined us in 1944 at the end of the war. We found a little cottage in Prideaux just through the Luxulyan valley. During my time with the Parkers I became a member of the choir at the beautiful village church, and me being me would sing out of tune on purpose, so the vicar would make me pump the organ which consisted of a long wooden handle that had to be pumped without stopping. Great times.

We all returned back to London around about 1945. In 1960 I became a London cabbie which I did for 45 years I have since retired and I am now 75 years old, but they were the very fond moments. I have been back to visit the village and the grave of dear Mr and Mrs Parker to whom I will be grateful to for the rest of my life.

A memory of Luxulyan contributed by Reginald Tipple to The Francis Frith Collection website. 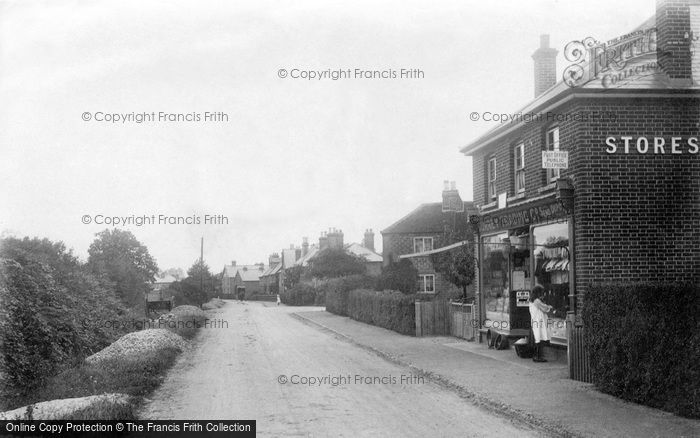 In 1939 at the outbreak of the Second World War my father was sent to London aerodrome, from Cornwall, to repair bombers and fighter planes. I was born in Cornwall in December 1940 and my mother wanting to be with her husband took me to Send, where father had managed to get a shared accommodation with another family in a bungalow in Tannery Lane. I think the bungalow and others have all been pulled down and new houses built there since the war.

Father built an underground air raid shelter with bunks in it and every time the siren went off in the village we had to jump out of the bedroom window to get into the shelter. The next door bungalow, about 100 yards down the road had a direct hit with a doodlebug which demolished it, broke all our windows on one side and jammed all the locks. I started school in Send, mother took me twice and then I had to go on my own walking, on the third day the school inspector turned up on mother's doorstep asking why I was not at school, with shock she explained that I had gone to school, they found me down by the canal fishing for tiddlers with a jam jar!

A memory of Send contributed by Jan Cowling to The Francis Frith Collection website. 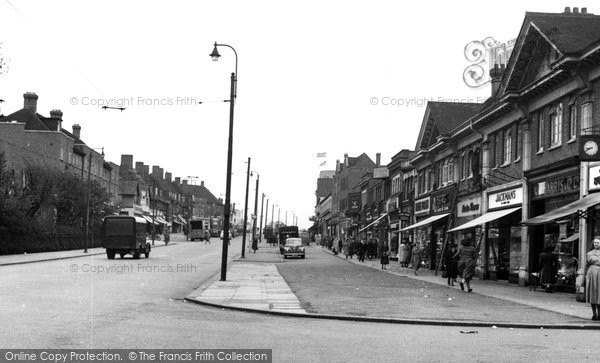 Since my birth coincided exactly with the outbreak of World War II in the September of 1939, my mum must have felt that childbirth was synonymous with calamity; I was Mum's 'war effort'. Home was a semi-detached two-storey house in Melrose Gardens, a cul-de-sac of thirty-two identical semis in Edgware, Middlesex. Dad was a printer by trade, and during the war years Mum worked at de Havilland's aircraft factory. My earliest recollections of those years was alternately being hoisted on Dad's shoulders to ""watch the fireworks"" (bombing) over London from our front door, or being hurriedly shoved into the pillow-lined steel cage Dad had rigged under the living-room table. Sometimes we joined the other families in the street-shelter 'til the 'all clear' sounded. Every child received a bottle of cod liver oil and another of orange juice (the former definitely to be taken before the latter). Powdered milk and eggs were the only kind we knew and I thought delicious. Dad managed to get me an apple on the black market for 2/6d. and I'm sure he paid more for a banana, which I didn't know had to be 'unzipped' and I bit right into the bitter tasting yellow peel. But the least memorable delicacy of the war years was whale blubber, which went into the frying pan ten times bigger than it came out, and tasted like nothing meant for human consumption. As time passed and the war showed no signs of letting up, we kids were evacuated out of harms' way. I remember waiting with hundreds of other children on the station platform, each of us with a luggage tag tied to our lapels with our name and address of destination. I was sent to Chesham in Buckinghamshire. I don't know how long I was separated from Mum and Dad, but I do remember the Victory street party with ice-cream, and my best friend Sylvie's dad banging a big bass drum. The blackout sheets were replaced with brightly coloured chintz curtains and Britain got down to the business of rebuilding.

A memory of Burnt Oak contributed by Heather Rohrer to The Francis Frith Collection website. 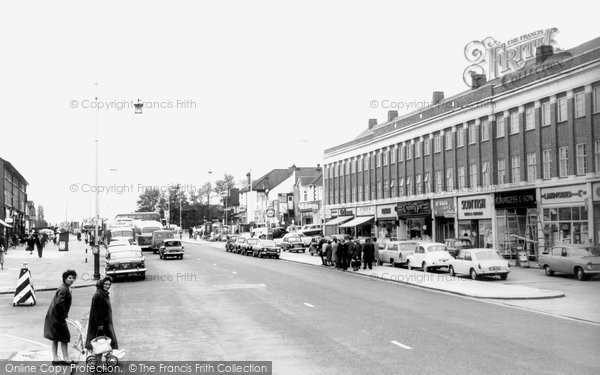 VE Day in Greenford in 1945 – and an unfortunate incident with knicker elastic!

My memories are of the ending of the Second World War in 1945. My family and I went to a VE (Victory in Europe) party down the Greenford Road in King’s Avenue. I was about 7 years old at the time. The music for the party was provided by a man playing on a piano dragged from someone’s front room. Whilst I was dancing with my elder sister, the elastic broke in my knickers. I was trying to hold them up and tell my sister what had happened but she took not the slightest bit of notice of me and carried on dancing. Apart from the worry of my knickers, that evening was one of the best memories of my life – my family was together and all was right with the world. 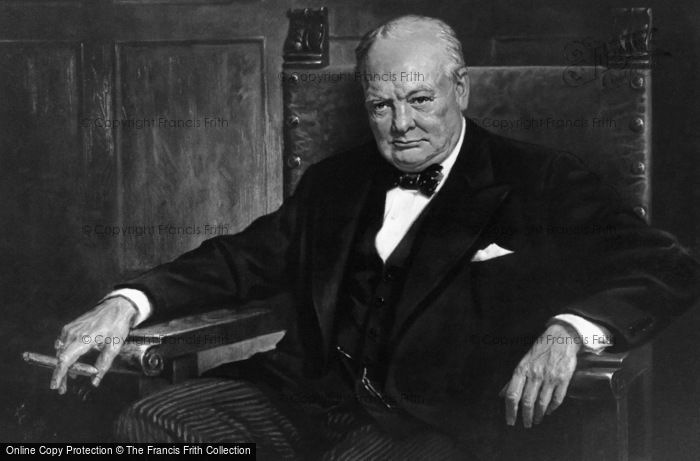 The War Years in Isleworth

In 1930 I was born in Isleworth, at 25 Northumberland Avenue. I lived there until 1951 and my most vivid memories are of the Second World War years. I can remember the vapour trails of aircraft overhead as the Battle of Britain took place in the blue skies above us in the summer and autumn of 1940. My dad dug a hole in the middle of the garden and installed an Anderson shelter in which we slept during the London blitz of 1940-41. The metal walls were dripping wet with condensation by the time the morning came and we emerged unscathed into the daylight. One night there was the sound of a sharp crack and I later found a piece of shrapnel that had torn through the earth and hit the metal wall of the shelter. At night time I would stand in the road outside the house, along with the neighbours, to watch the huge orange glow which seemed to hover at the end of the road. It was of course London burning as the bombs fell onto the city, especially the dock area. My dad was an auxiliary fireman (AFS) and he was frequently called to help fight the fires, along with his fellow firemen from Heston auxiliary fire station. Later in the war we used to have troop convoys travelling along the Great West Road and sometimes they had chalked on their canvas sides ‘Don’t wave at us girls – we are British’.

I delivered the newspapers to the Northumberland Estate announcing victory in Europe on VE Day – 8th May 1945 – and I well remember thinking “This is history”. On that day there were street parties everywhere and just round the corner in the evening there was a huge crowd singing and dancing. House owners in our avenue were taking off their wooden gates (all the metal ones had long since gone for munitions) and throwing them onto a bonfire in the street – the tarmacadam caught fire and there was quite a hole in the road for a while. Then afterwards, soldiers, sailors and airforce people came home on demob leave with their chalk-stripe suits and slowly life changed away from the war years.

I remember the Prime Minister Winston Churchill paying a visit to Busch Corner in Isleworth during his election campaign soon after the end of the war. My mum said to me “Doesn’t he look tired” – he had worked so hard for 5 years, getting us through those dark years of war.

A memory of Isleworth contributed by John Rose to The Francis Frith Collection website.