My Childhood In Burton In The 50's And 60's - a Memory of Burton in Lonsdale.

I was born in the village in 1949, in an end terrace No.1 Woodview. It was down a small road in the centre of the village and at the top, I believe at one time there was a timber yard/sawmill. The cottages at the top of the ‘yard’ were called Sawmill Cottages and my grandmother Annie Blundell lived at No.1 having moved in the early 50’s from a cottage at Ward End Farm, Low Bentham, where she had lived with her mother. Her mother was 93 when she died.

In my early childhood, I remember there being 6 shops in the village, these being a small sweet shop on the Low Street run by May Harrison, on the Main Street a Co-op run by Gertrude Hindmarsh, a butchers shop run by Billy Whitfield, a post office run by Amy Vickers, a grocers and general store run by Sam Murray, a Newsagent/Drapers shop run by Annie Nelson, and of course there was Nelson Garage, run by Albert Edmondson and his family. There were also two pubs, the Punch Bowl on Low Street and the Joiners Arms on Duke Street.

My vivid memory of Sam Murray was that he constantly had a lit cigarette in his mouth. My brother and I were sometimes mesmerised when he was slicing the bacon on one of the old hand cranked bacon slicers and the grey ash on the end of his cigarette balanced precariously and ready to drop into the bacon! I don’t recall that it ever did but nevertheless it did provide us with some entertainment. The shop was always our first stop on our way to school, with Black Jacks at 4 for a penny (1d.) and gobstoppers a penny each.

In 1956 my mother took over the running of the Newsagent/Drapers, and my family moved up from Woodview to North House, living at the back of and above the shop. My mother ran the shop for a few years before she gave it up in the 60’s.

My memory recalls the names of many of the children who went to Burton Infant and Junior schools and I list below some of these. Apologies if I have missed anyone out, but this is over 60 years ago;

There was also the ‘senior school’ as part of what was known as Burton-in-Losdale Endowed School. Our teachers were Mrs Annie Tustin and Miss Lancaster, the headmaster at the time was Mr J.P. Watson. A lady called June Fisher taught us Art and PE. I also remember a Mr Price (Bill?) who taught Science. Mr Price lived in the village with his wife and two sons Glynn and David.

As kids living in an area where we had the river at the bottom of the hill and the woods within an easy walking distance, this probably kept us occupied for much of the time at weekends and in school holidays. Our time was spent swimming in the river and building rafts out of old oil drums, building dens in the woods and fishing. For years I spent hours with my rod and line returning home unsuccessfully after each trip down to the river. However, I became friendly with Bill Waggett and I soon learned from Bill and his dad Jacob that there were easier ways of removing the fish from the river. This basically involved a pole with a metal hook on the end and I shall not elaborate any further!

Other activities which kept us occupied were the newly formed Scout Troop established around 1960, and run by “skip”, a Mr Griffiths, and ably assisted by Mr Dinsdale (father of
Roland and Maurice). In the summer and good weather we would spend our time learning such things like how to build fires and some of the woodcraft skills which I retained for many years.

It was a very happy childhood, without mobile phones or computers and basically left to make our own entertainment. When we eventually got our own TV - black and white - of course, we no longer needed to go and visit Stewart Salrein for half an hour or so each evening, where 3 or 4 of us would congregate just to watch the ‘offerings’ of the day! I got my first transistor radio in around 1961 and spent the next couple of years listening to Radio Luxembourg on 208, usually under the privacy of the bedclothes!

In 1960 after passing my 11+ I went to QES Grammar School in Kirkby Lonsdale. In the early days we travelled to and from school on the Ribble and Pennine buses. On the way home there was always a half hour wait in Ingleton whilst we waited for the connection. This invariably involved wandering up to Bernie’s Cafe in the village, buying a cup of frothy coffee in a glass cup, and putting 6d in the juke box, to listen to someone like John Leyton singing “Wild
Wind”, or Johnny Preston singing “Running Bear”. We thought we were the height of cool!

At some stage our trips to school on the services buses were replaced by a dedicated mini-bus service, the bus being owned by Nelson Garage and driven by Stewart Salrein’s mother, Kathleen.

We spent a couple of our early teen years in the church choir, arriving at the church at 10am to ring the bells (totally tunelessly!) before changing into our ‘uniforms’ in the vestry. I remember one Sunday finding the cupboard unlocked where the vicar - Rev. Henshaw - kept the communion wine. So each of us having a good swig out of the bottle we duly topped up the bottle with water. Was this some sort of miracle, turning wine into water?

The other church activity we always enjoyed was the carol singing just before Christmas. Here a group of about 30 of us of all ages went round the village and raising money for the church. The favourite stop was Greeta House which was owned at the time by a Mr G.W. Taylor, who apparently owned a textile business somewhere in deepest Lanacashire. However, after a couple of verses of “Hark the Herald Angels Sing” Mr Taylor would appear from the door with a tray full of glasses of sherry, which was very welcome especially to young teenagers!

Later in the 60’s our village version of a youth club was formed, this being the Young Farmers Club. Even though several of us had no farming background or knowledge and the sheep judging competitions were a total mystery to us, we came into our own when it came to showing the farmers’ lads how to take off the top of Coates’ Somerset cider, acquired via the back door of the Punch Bowl via an ‘insider’ Tommy Hird, whose father ran the pub at the time.

Each village probably had its unique character and the one who stands out by a mile was Jack Waggett. Jack was undoubtedly of Romany descent and he was never seen without his flat cap and spotted handkerchief worn round his neck. He was seen regularly either stood on the bridge or half way up the hill where he would sit on the corner of Leeming Lane and Chapel Lane, where he would wave his stick at literally everyone who went past. He frequented either the Punch Bowl or Joiners Arms, depending on the landlord of each at the time and how he was treated. I think over the years the Guinness Brewery did very well out of Jack Waggett. Jack had previously run a slaughterhouse at the bottom of Burton Hill but sold out in the 60’s and the buildings were cleared and developed into private housing.

As with every village town etc. people moved in, and out. A new headmaster arrived at the school and his daughter Jennifer Lucas went to QES. Also we got a new village bobby, PC Harold Ryder, and his two children Gillian and Allan both went to QES. The Makin family moved into Barniwig with father Keith taking over Imperial Garage in Ingleton and his sons, David and Colin and daughter Diane going to QES. John Taylor moved into part of Greeta House, his father running a market garden business. John also went to QES.

We stop in Burton whenever we travel up to the Yorkshire Dales, probably a couple of times a year. Visiting the graveyard at the church is always a sad but happy occasion, knowing the names of many of the people who I had known from my days living there including of course, my close family. It all brings back so many happy memories of my childhood. However, with the views of Ingleborough and surrounding fields and countryside, I feel that they are at rest and peace in one one of the loveliest places in the country. Burton is always considered to be my real home.

Wed Jul 14th 2021, at 9:45 pm
Melinda Willan/Ne.Edmondson commented:
Hi. Yes. I remember you well chutch! And Antony and your lovely Mum. I played in your house for many an hour. I still call it the blundells house lol. June fisher is still Alive. So is Kathleen. Glad to here from you. Hope you are well!
Add your comment
Report abuse 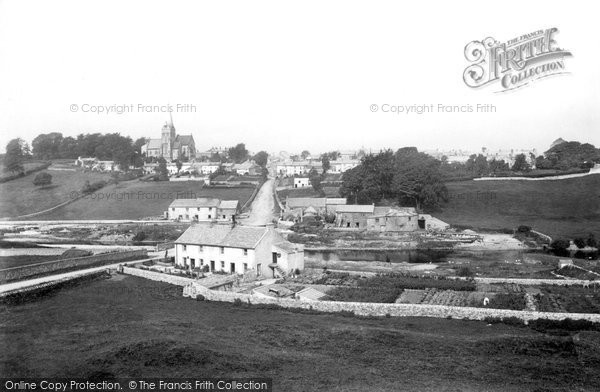