The Eleanor Cross At Geddington - a Memory of Geddington.

The two girls seen in this photo of the ford at Geddington in the mid 1950s aren’t me and my sister, but they easily could have been! We used to visit my grandmother at Geddington regularly around this time, and this was one of our favourite spots to go and play, feed the swans and generally splash about it bit. I always loved to hear my grandmother tell the romantic story about the lovely old medieval monument in the village centre as well, which can be seen in some of the other photos of Geddington in this selection on the Frith website. It is one of a number of ‘Eleanor Crosses’ which were built to commemorate Eleanor of Castile, the beloved wife of Edward I who died in 1290 whilst she and the king were at Harby in Nottinghamshire. Her body was taken from there to London for burial in Westminster Abbey, and the king later had twelve commemorative crosses built at the places along the route where her funeral cortege rested for the night. Only three of the original crosses remain – the other two are at Hardingstone near Northampton (although damaged, it remains an important landmark on the London road), and Waltham Cross in Hertfordshire – and Geddington’s is the best preserved, standing as a sad commemoration of a royal love story. The cross contains a number of small statues of the queen, who was probably 13 when she married Edward, and bore him a total of 16 children. 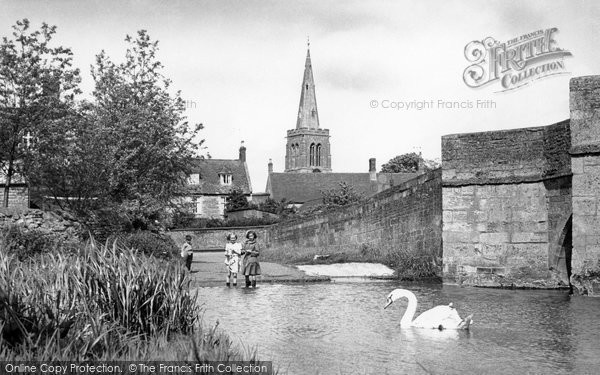