I first discovered Jaywick when I was just ten years old in 1954. I was taken there by my parents in a 1936 Bedford Van to stay with my uncle Bill, aunt Flo and cousin Bill who was 6 months younger than me. This would be my first holiday and the first time I spent time away from my parents. We stayed in a tiny chalet just across the way from the Casino amusement arcade and skating rink. What fun we had, and so much freedom for two 10 year olds from the Angel, North London. Following that first visit my parents booked a chalet right opposite the Casino for the next 2 years; I believe this was when I developed my love of Rock n Roll music which belted out of the Casino juke box. Mum an Dad (Jim and May) developed their love for Bingo at the same time. Then in about 1956 my parents became the proud owners of their own bungalow at 25 Alvis Avenue so then the scene was set for weekends and holidays, not only for us but all the family. We spent so much time at Jaywick and in the Casino we all became great friends with all the staff that worked there;Jack & Mary, Ralph, Ron Smith, Glen, Stan Baldwim, Doreen and Malcolm. I was allowed to own my own bike at Jaywick - this was not allowed in London. I was quite the 'Jack the lad' flying about on my bike with my butterfly handle bars and really enjoying lots of holiday romances as a young teenager. When I was 15 years old 7 of us boys, including Bill, all went and stayed at the bungalow, what a great time we had on the double bikes and the fairs at Clacton. We spent some of our evenings at the Morocco Club having a wonderful time there, not getting drunk but getting pretty happy. We mixed with other teenagers (mostly girls) but also had lots of fun with folks and their families because that was the sort of place Jaywick was. Bill and I, both 68 years old now take a once a year pilgrimage to Jaywick and walk around looking at the old sights. Sadly, the Casino and the Savoy (table tennis), next to the Pavilion have long gone. The Pavilion is still there but is now a sort of undercover market. No more holiday makers at Jaywick mostly people living in the chalets now that are still standing. Main drainage now no more blue and cream, Walls tractors going around looking for the C signs indicating that the Elson toilets need emptying. I still hear so many songs now that instantly take me back to those wonderful days of Elvis, Bill Haley, Ricky Nelson, Marty Wilde, Billy Fury, Tommy Steele, Buddy Holly and so many others. So if you are down Jaywick sometime and you see two old geezers with smiles on their faces please say hello, especially if you are a Lady, we may have already met before.

Fri Apr 3rd 2015, at 2:59 pm
jimdavies85 commented:
I remember jaywick well it was the only holiday we ever had we went there every year and stayed in a chalet which was called kiora which was on the sea wall I am 74 now and have fond memories of the place,there used to be a skating rink at the far end of the sea wall,I have hear Jaywick is in disrepair now shame, my friends and I all had motorbikes and we would all stay in this tiny chalet
Add your comment
Report abuse 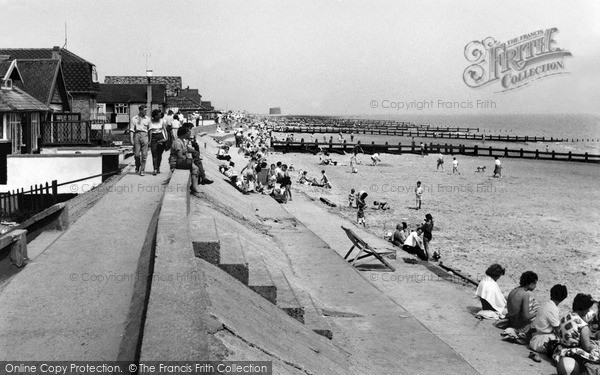