My sister, Helen, and I lived at No. 3 Plasnewydd Street and, although Helen now lives in Lechlade in Gloucestershire and I have finally come to rest (no, not dead - yet) in Cardiff, we talk every week and often reminisce about our happy childhood in Maesteg - about people and places and things which happened. There are scores and scores of people who we remember and every now and then one of us will bring up a name that we can't quite remember. This morning, I tried to remember Lynwen (Rees?) and her brother (Phillip?) who lived somewhere in the Office Road area but, although I can see them well, I can't quite remember their surname. Does anyone know? Helen was talking of Jennifer Tucker, a name I remember well, but I can't for the life of me think who she was. Anyway, starting from McGregor Row, I sometimes went to the home of Mr (Ron) Edwards, the partner of Edwards and Hill in Commercial Street, a large TV, radio and electrical shop. He was an enthusiastic radio ham, and since all things electrical and radio were right up my street, he let me listen and talk to people all over the world. There somewhere, was a monkey puzzle tree in someone's front garden - those gardens were long - a tree which I've never seen anywhere else. Just under the bridge (which I now understand is no longer there), was Dr Farrell's house, where Dr Sinclair, Dr Farrell and a Scottish Dr Wishhart had their surgery in one of its rooms. There was also a Dr Mac, who I can barely recall, who once told my mother that he was more ill than many of the patients who went to see him. I think he must have died when I was very little. I remember the receptionist, who the Farrell children nick-named Doe-Doe, and a nursing Sister; Sister Walsh (was she perhaps Mrs Farrell's sister?), a very jolly Mrs Farrell and their childre; Una, Noola, Norah and Margaret (Bod) and much later, a boy named John. The surgery holds memories for me. No appointments in those days. You just went and were given a piece of paper with a number on by Doe-Doe (was she something Jones I think?) and sat in the waiting room or stood out on the pavement if there was no room, which there often wasn't. You had to find the person who had the number just before yours, so that you would know when it was your turn to go into one of the two consulting rooms. It now sounds haphazard but it worked. Helen and I used to go to the house to play with the four girls (John was born much later) in the house and large garden. In the house I remember were two stairways to the upstairs and in the garden I remember Dr Farrell's tall TV mast - TV was a hobby of his - I have a feeling that he made them. The river Llynfi to one side of their house, which was I believe the start of Castle Street. Further down on the other side of the road was Nicholas' corner shop, owned by Mr and Mrs Nicholas. She could add up so quickly! He was a psychiatric Nurse in Glan Rheid hospital, but helped in the shop. I was later in school with their two daughters, Susan and Ceri, both of whom I fancied. If you went to buy something there which they did not have, one of them would go and buy it for you from a shop in the town centre and either bring it back to the shop while you waited or to your house! No profit in that! What service! Next door was the tuck shop, a very tiny affair full of sweets. A Miss Tuck, my sister remembers owned it, who apparently wore a night cap to bed (how do we know that?), but I only remember it belonging to Mrs Goodwin. In the entrance to the shop was another door to the home of Miss Millard (who was the Manageress of Dunn's shoe shop in Commercial Street) and Miss Lewis, who I think maybe owned Lewis the butcher's shop in Talbot Street, close to the King Alfred pub. Roughly next to that was the 'dole' building, and then Spracklen's petrol station, Fairfield Garage, owned before them by the Worgans' - have I got that name right? I remember the grandmother, Mrs Worgan (can't recall a Mr Worgan), the daughter Ruth and son James, who was a sailor and looked very smart to me in his sailors uniform. When Jim and Audrey Spracklen took over and moved in with their children Ann and Paul, big changes took place to the building, which to me at the time looked like a smart Scandinavian-style house, with a large section of brown wood. The pumps changed to more modern ones - I can only remember there'd been a Shell pump before with a white glass top in the shape of a shell. I don't remember the names which succeeded it -BP maybe - and a showroom which displayed a Singer car, a name in motor cars which I'd never heard of before nor since, but very smart shining cars they were. I spent a lot of time there with my best friend Paul, playing indoors with his train set or trying to outwit him at chess. And later we sometimes helped out serving petrol, topping up oil and supplying shots of Reddex to the petrol. We checked radiator levels too and topped up batteries with distilled water, which Mr Spracklen produced from somewhere. Couldn't have been from a tap could it? I really don't know. Hardly any words left now of the 1000 allowed, so I'll come back sometime and write more about the really great and happy memories that I have of my childhood-to-adulthood in Maesteg. Such happy memories. 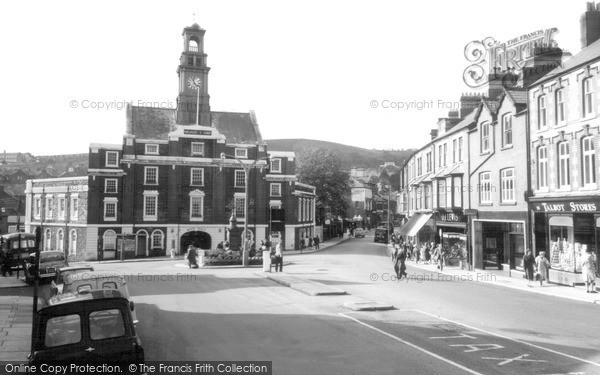