A Memory of Abridge.

I grew up in the Maltsters Arms - my mother and father, Stella and Alan Knight, bought the pub from the brewery in the late 70's and my father renovated it. My sister Joanne and I attended Ongar Comp and my brother Paul attended the village infants school. I rememebr the Silver Jubilee - there is a very funny video on You-tube. (it features my father)

This memory is written about Abridge, the Village c1960 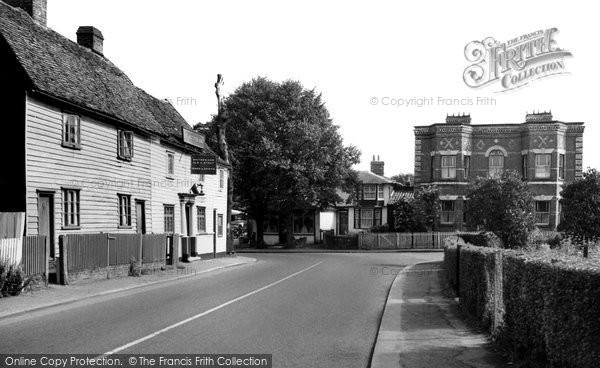 I remember the Maltsters Arms (Whitbreads brewery) both before and after the alterations. Before the alterations, during all of my childhood, Mr and Mrs Stretton were the licensees. The Strettons and previously Joyce's parents had been licensees since 1938. They lived in the two cottages on the side of the pub (left in the photo). Mrs Stretton (Joyce) was a bit severe and never smiled. Mr Dick Stretton was a dour sort of a bloke, so the couple were two of a kind. Mrs Stretton had a little grey Cairn Terrier which would sit out on the front raised bit behind the wooden fence. On the left hand side of the pub as you went in the front door was the Snug and on the right hand side was the Public Bar. In the middle was the Off Licence, entered through the porticoed door with the sign above, which consisted of a passageway up to the back where the counter was to a little glass window which would be shut. You needed to tap on the window to get served. Both bars were accessed by doors from the passageway which (I think) were the only public entrances. In the winter there would be a nice coal fire in the Snug which only had about three tables. It was like sitting in someone's sitting room, very private. The Public Bar had a long wooden bench going up the middle of the room with tressle seats either side and customers would sit face to face along the length of the tressles. At the top end by the bar was a piano and Mrs Stretton on occasion sat at the piano and the locals would sing along to her tunes. Very cosey! Really it was the best pub in the village - although the Blue Boar did have the billiard table, the dart board and, in the alcove, the stuffed Boar's Head with little red light bulbs for eyes which switched on and off at about minute intervals ... amusing but also slightly sinister. I never cared much for the White Hart - no ambience, atmosphere, whatever you want to call it and, by all accounts, the occasional punch up!
By Sue Terry on Mon Jul 9th 2018, at 4:59 pm
Contact User
Report