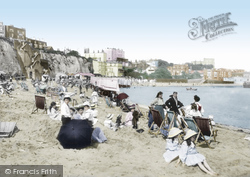 A selection of nostalgic seaside photographs from The Francis Frith Collection showing that most iconic feature of beach scenes from the 19th and early 20th centuries – the bathing machine. (read) 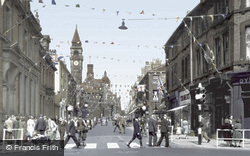 A selection of nostalgic photographs from The Francis Frith Collection taken in 1952, when Her Majesty officially acceded to the throne, and 1953 when her Coronation took place. (read) 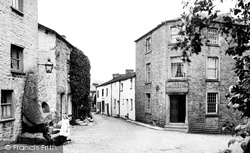 To celebrate the summer holiday season, here is a selection of nostalgic seaside photographs from The Francis Frith Collection showing that most iconic feature of beach scenes from the 19th and early 20th centuries – the bathing machine. Ladies and gentlemen wishing to bathe in the sea would enter the machines from the landward side and horses would then haul the contraptions down into the water. Meanwhile, the bathers were donning their bathing apparel inside, and would emerge through the door and slip, dignity intact, into the shallows. Whilst they were bathing, the horses would be harnessed to the other end of the machines ready to pull them back to the beach for the return journey. Some of these photographs are in their original black and white version, and others have been colour-tinted by hand in the Victorian style, but they all give us wonderfully nostalgic views of seaside resorts in the past, in the heyday of the Great British Holiday. 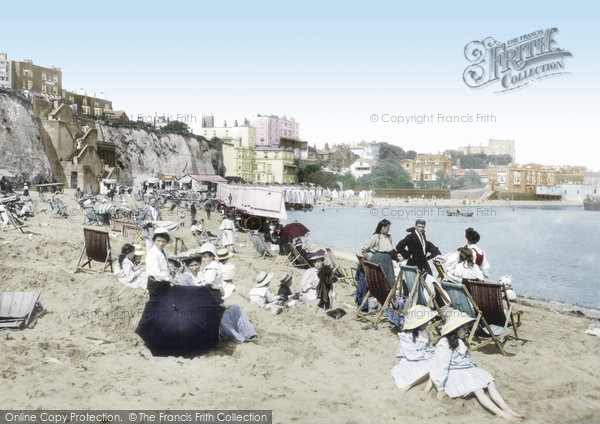 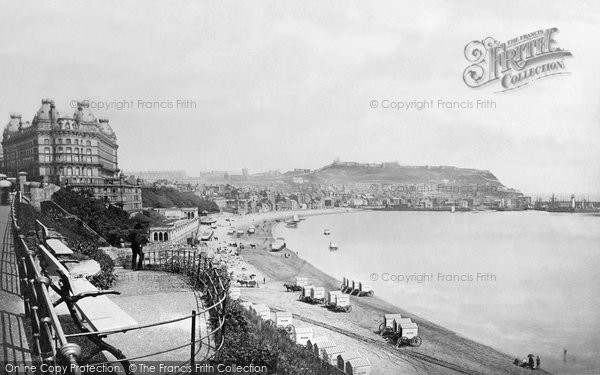 Bathing machines are lined up on Scarborough's beach at South Bay, overlooked by the imposing bulk of the Grand Hotel which was the largest brick building in Europe when it opened in 1867. It was designed by the Hull architect Cuthbert Brodrick (1821-1905) around the theme of time with 365 bedrooms, 52 chimneys, 12 floors and 4 turrets, representing the number of days, weeks, months and seasons of the year. Scarborough is often claimed to have been the first resort on the north-east coast to introduce bathing machines on to its beach. There is a written record of them being hired out by three ladies in 1797. 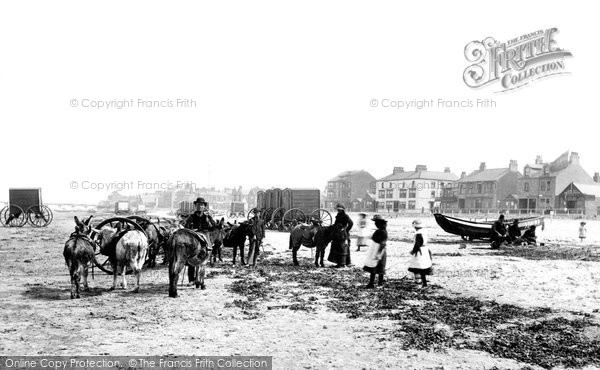 Since medieval times a trading and fishing port, Redcar became a holiday resort in the 19th century thanks to its beautiful beach. "As a watering-place, Redcar dates from 1842, since when it has progressed at quite an extraordinary rate, and certainly owes much to its magnificent sweep of sands", declared a late Victorian guidebook to British resorts. "The sands of Redcar can nowhere be surpassed in extent, being ten miles in length and a mile broad at low water. They have been characterized as 'smooth as velvet', yet so firm that neither horse nor man leave their imprint on them as they tread the strand." In this photograph, gentlemen, perhaps fishermen, sit at the side of a coble at Redcar watching the children approaching the beach donkeys and their masters. If the children have a 1/2d they will be able to have a ride up and down the beach. In the background, bathing machines are dotted around the beach. Bathing machines were introduced here at Redcar in the 18th century by Sir Charles Turner, a landowner of nearby Kirkleatham, following the trend started in Scarborough. 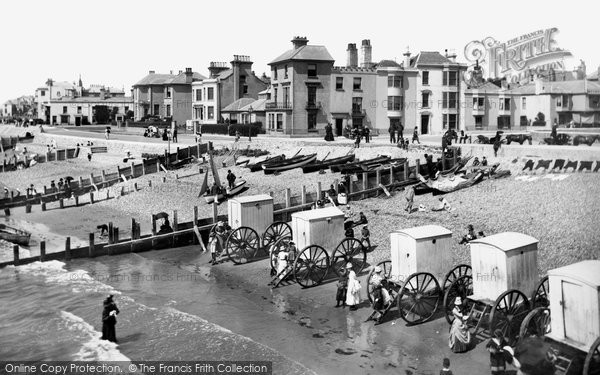 Safe bathing and a host of traditional family attractions made Bognor a popular destination in the great days of British seaside holidays. Queen Victoria referred to the place as 'dear little Bognor'. From the beginning of the 19th century most resorts had bathing machines in which bathers could change whilst being dragged into the sea, initially by horses and later by winches, from where they could immerse themselves in the healthy sea with due modesty and propriety. Bathing machines were still very popular at Bognor in 1890 - it was not until the Edwardian era that people changed and swam from the beach. 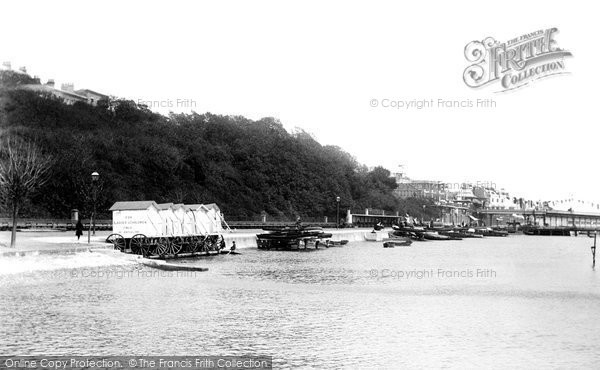 At Southend-on-Sea, H Absalom offered bathing huts for hire, but only for the use of ladies and children. This was where they could discreetly enter the water, hidden from prying eyes. There were other huts for men. In fact changing on the beach was officially forbidden until 1948, although, by that time, the regulation had long been ignored. 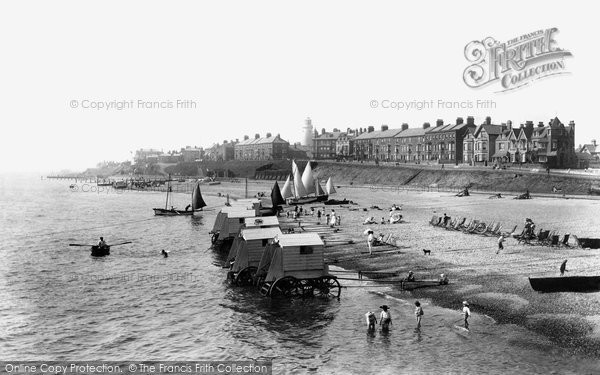 With its broad greens, its sandy beach, the lighthouse on North Green, and its picturesque buildings, Southwold has long been a popular resort. Here is a typical beach scene, in an age when modesty was paramount. Ladies would take to the water from the bathing machines rolled down to the water's edge. The holidaymakers in the deck chairs on the beach will be 'taking the air' rather than working on suntans - a tanned skin would not become fashionable until the 1920s. 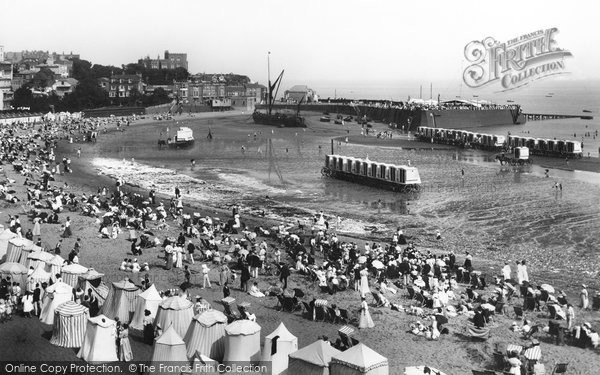 Bathing machines and an array of quaint 'changing-room' tents abound in this Edwardian photograph of the busy beach at Broadstairs. This was the queen of all watering places as far as the novelist Charles Dickens was concerned; he first visited Broadstairs in 1837, and subsequently wrote 'Nicholas Nickleby', 'Barnaby Rudge', 'The Pickwick Papers' and 'The Old Curiosity Shop' while staying in rented houses in this rapidly-growing resort. Eventually Dickens bought the crenellated building overlooking the bay seen in the background of this view, then known as Fort House, and spent holidays there for many years. He loved this house, and called it his 'airy nest'; it was there that he wrote much of 'David Copperfield'. 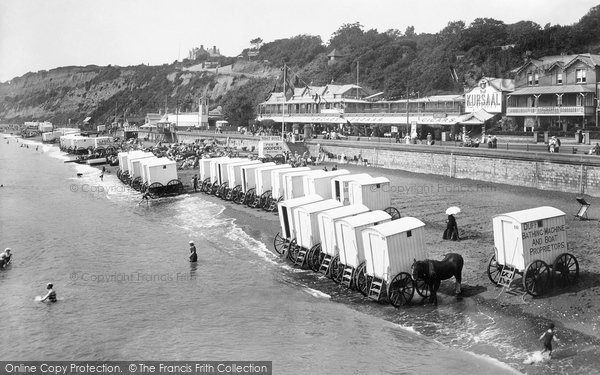 Easily reached by train, Sandown on the Isle of Wight was thriving as a seaside resort by the time this photograph was taken. It was promoted as the preeminent bathing-place of the Island, with its level, sloping and sandy beach, a long esplanade and a fine pier which jutted out into the sea for nearly a thousand yards. The Kursaal seen in the background of this view began life at the end of the 19th century as an unnamed arcade of shops extending along the southern end of the Esplanade. Early in the 20th century a new owner acquired the arcade and built a concert hall, complete with dance floor, on the flat roof. He named the development the Kursaal, but it was later renamed the Vectis Hall. 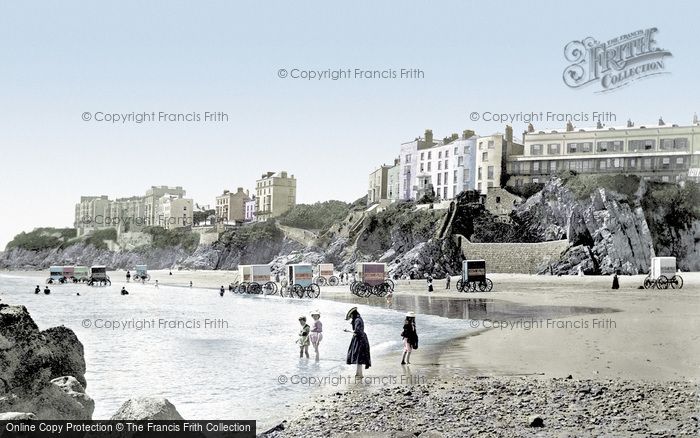 A late-Victorian guidebook to Britain’s coastal resorts said of Tenby: 'Tenby stands on a tongue of limestone rock, ending a green promontory, which is crowned by the ruins of the old castle, and is now pleasantly laid out with walks which serve at once as pier and promenade, and from which are commanded fine views of the bays on either hand, and of the distant Devonshire coast opposite. Both on the north and south sands, which are separated from each other by the Castle Hill and harbour, there are numerous bathing machines, and in this respect Tenby is above reproach.' 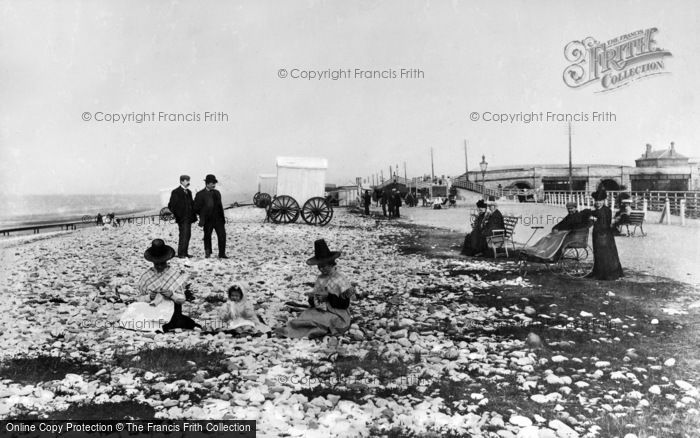 Many photographs of ladies in Welsh costume appear to have been posed shots taken for use on tourist souvenirs, but this lovely period view from c1900 seems to be the real deal – two ladies dressed in traditional Welsh bonnets and shawls enjoying a day on the beach, complete with bathing machines in the background. Everyone is fully dressed - no one in this view is going to get sunburnt! 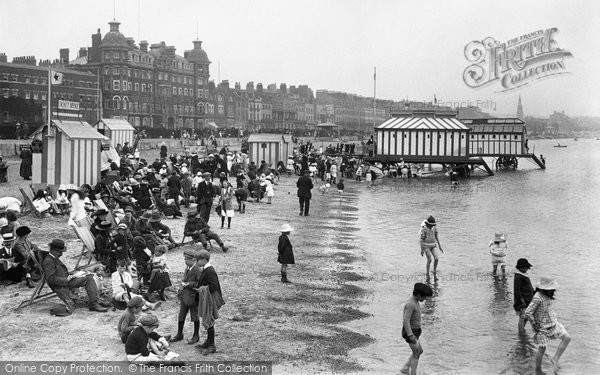 Weymouth on Dorset's south coast developed as an early seaside resort in the late 18th and early 19th centuries thanks to the royal patronage of King George III, who regularly went there to sea-bathe on the recommendation of his doctors. Weymouth's loyal citizens employed a brass band, discreetly hidden in a nearby bathing machine, to play 'God Save the King' as His Majesty plunged into the waves. The larger bathing machines (bathing saloons) seen on the beach in 1918 in this photograph ran down into the water on rails and consisted of a number of cubicles. Affluent visitors would hire a single machine for themselves. 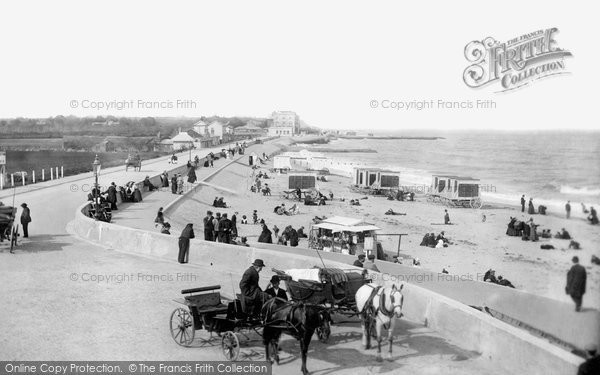 In the 1820s the Society of Friends at Colchester began to turn the farming village of Walton-le-Soken in Essex into the coastal resort of Walton-on-the-Naze. Initially Walton's visitors were the 'better sort' of people, but with the coming of the railway in 1867 the town was opened up to all. The sea wall, only ten years old when this photograph was taken in 1900, was never really high enough to contain the waves. This was particularly unfortunate for the Bath House Hotel, the first building along the road in this view, which got a regular flushing out from the sea. Charles Bates's bathing machines are in evidence on the beach here, although nobody is bathing. 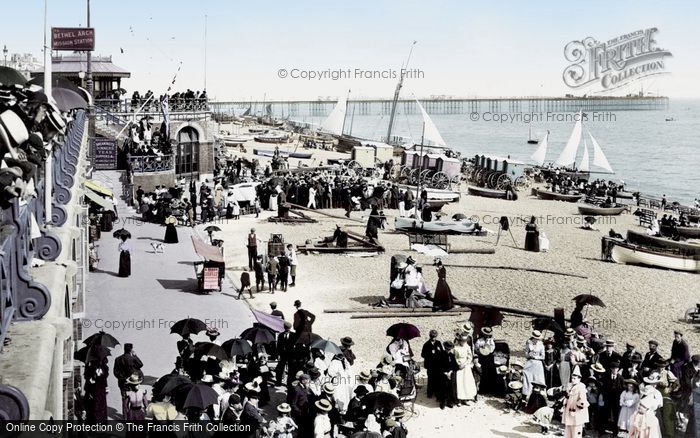 Here we see Brighton's beach in its Victorian heyday at the close of the 19th century. This picture is full of life, bursting with boats for excursions, fishing boats, rows of bathing machines, holidaymakers, onlookers, numerous stallholders and beach entertainers - one of Brighton's famous pierrots can be seen amusing the crowd bottom right. And note the beach photographer's tripod on the beach, right of centre. In the background the Palace Pier is still under construction before it opened in 1899: this photograph freezes a moment in history.

This post has the following tags: Places,Nostalgia.
You may find more posts of interest within those tags.