February 25th 2020 is Pancake Day, correctly known as Shrove Tuesday. The 40 day period leading up to the Christian religious festival of Easter in the spring is known as Lent, which begins on Ash Wednesday. Shrove Tuesday is the day before Ash Wednesday and was traditionally the day for ‘shriving’ – confessing sins and asking forgiveness – before Lent began. Lent was a period of religious fasting and dietary austerity in the past, when eggs, butter, meat and certain other foods were not allowed to be eaten. This is the origin of what we now call Pancake Day, when making pancakes on Shrove Tuesday was a way of using up some ‘forbidden foods’ in the larder before Lent began. The bell that was rung in parish churches on Shrove Tuesday morning in the past, calling people to church to be shriven, was often called the ‘Pancake Bell’.

Shrove Tuesday in the past was traditionally a day for fun, feasting and pranks, the last chance for merrymaking or wild behaviour before the rigours of Lent. In this feature we bring you a selection of historical photographs from The Francis Frith Collection of places around England which are linked with local traditions celebrating Shrove Tuesday or pancakes. 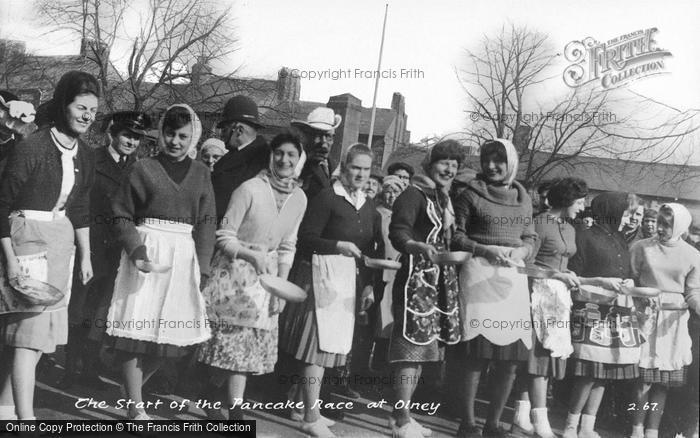 Olney in Buckinghamshire is famous for the pancake race that takes place through the village on Shrove Tuesday. One story about the origin of this historic event is that it commemorates a harassed housewife in the 15th century who heard the shriving bell and dashed to the village church still clutching her frying pan containing a pancake. The Pancake Race is open only to female residents of Olney who are 18 and over, and have been resident in the town for at least three months. Here are some of the lovely local ladies about to start racing in the mid 1950s. 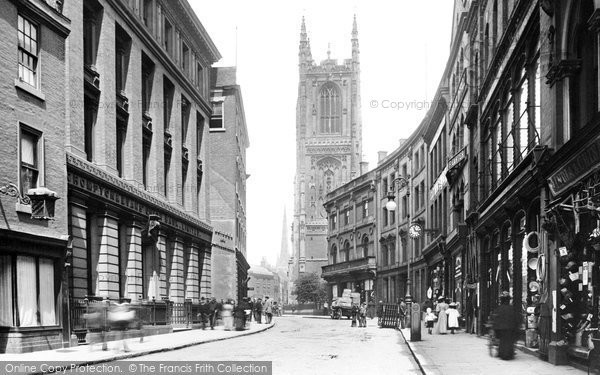 The phrase ‘a Derby game’ means a game when two sides from the same town or city play each other, and possibly derives from the Shrovetide football matches that used to take place in Derby between teams made up from the parishioners of St Peter’s Church and All Saints’ Church at Iron Gate (now Derby Cathedral). When the ‘Pancake Bell’ was rung on Shrove Tuesday the players descended upon the Market Place, where the ball was thrown up and mayhem ensued. As many as 1,000 players could be taking part, the playing area was the streets of the town, rules were few and far between, and it was not unusual for players to finish up with broken arms or legs. All Saints’ goal was a waterwheel at Nuns Mill, which had to be knocked three times for a goal to count. St Peter’s goal was a nursery gate about a mile out of town. On Ash Wednesday the game was repeated, but this time restricted to those considered too young to play on Shrove Tuesday. The matches were disliked by many townsfolk because they caused damage to property and disruption to trade, and they were banned in 1846. 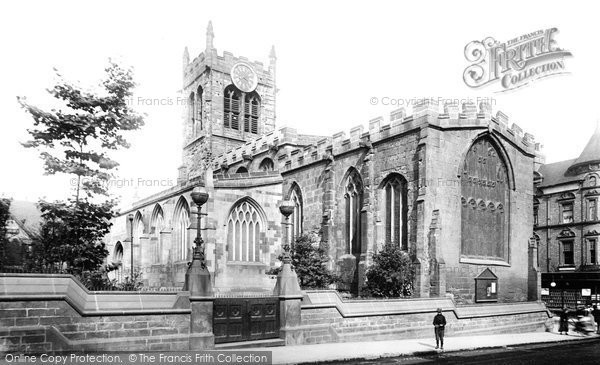 The following rhyme describes the churches around Derby, and was traditionally chanted at the beginning of the Shrovetide football match:

Pancakes and fritters,
Say All Saints and St Peter’s;
When will the ball come?
Say the bells of St Alkmun’s;
At two they will throw,
Says St Werabo;
Oh! Very well,
Says little St Michael! 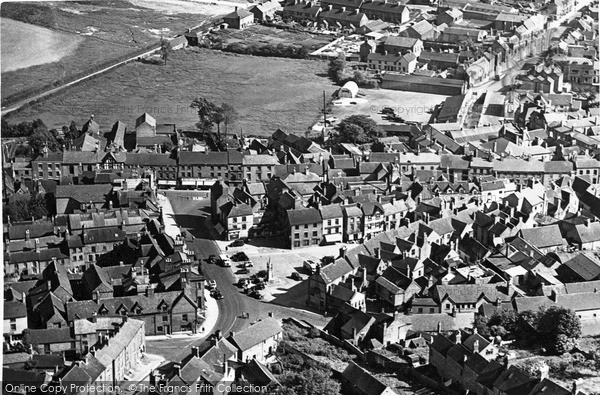 Although Shrovetide football matches no longer take place in Derby, they still occur in Derbyshire at Ashbourne, where the ‘Royal Shrovetide Football Match’ is played through the town over two days, Shrove Tuesday and Ash Wednesday, between the Up’ards, who live north of the River Henmore which divides the town, and the Down’ards, from south of the river. Play begins each day at 2.00 pm and lasts until 10.00 pm. There is no limit on the number of players and the ball is allowed to be kicked, carried or thrown, but it generally moves through the town in a series of hugs, like a giant scrum in rugby, made up of dozens if not hundreds of people, hence the game’s alternative name of ‘hugball’. Purpose-built goals erected in 1996 on the banks of the River Henmore are located 3 miles (4.8 km) apart and each team attempts to carry the ball back to their own goal from the turn-up, rather than the traditional method of scoring at the opponents’ goal. The players need to actually be in the river in order to ‘goal’ a ball, and the special ball they play with is filled with cork to help it float if it ends up in the water. 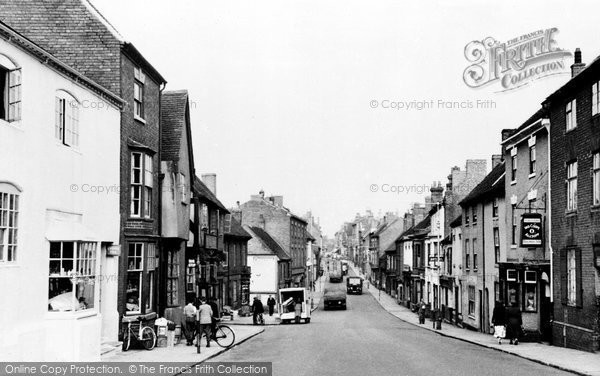 Atherstone in Warwickshire also still holds a Shrovetide football match. Known as ‘The Atherstone Ball Game’, it commemorates a match played between Leicestershire and Warwickshire in 1199, when teams used a bag of gold as a ball, and which was won by Warwickshire. The two-hour game is played in Long Street, and groups of players compete for possession of a giant ball that is specially made for the occasion. 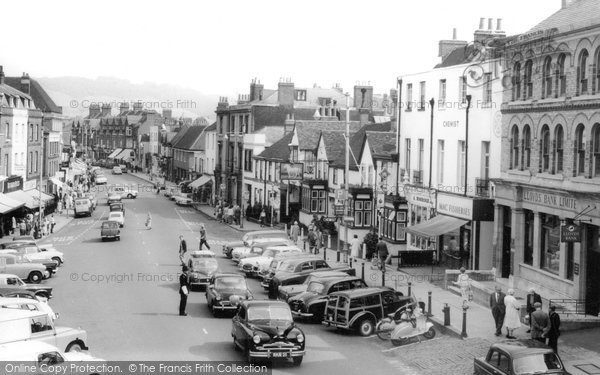 In past centuries football was also played in the High Street of Dorking in Surrey on Shrove Tuesday afternoon. Three balls, one white, one red and one blue, were paraded around the town. The balls were inscribed ‘Wind and Water is Dorking's Glory’. The shops closed their shutters and boarded up their windows for fear of broken glass. The red ball was kicked off by the boys at 3 o’clock, and the blue ball by the men, and then at 4 o’clock all the players took up the game with the white ball until the church clock chimed six. Ale was consumed after the game had finished, and money was collected for charity. 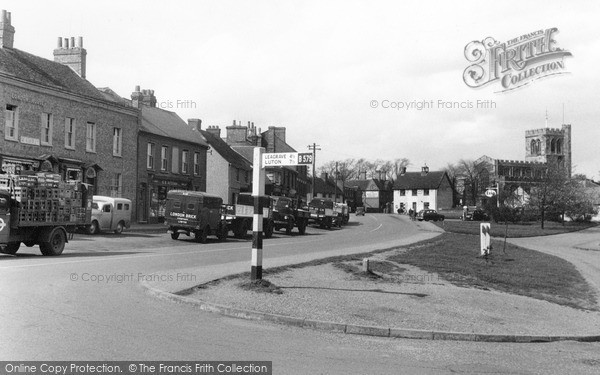 There is a low mound beside the parish church of St George of England at Toddington in Bedfordshire. Local legend says that a witch is imprisoned within the mound and that you can hear her cooking pancakes if you put your ear to the ground on Shrove Tuesday (‘Pancake Day’), the day before Ash Wednesday! 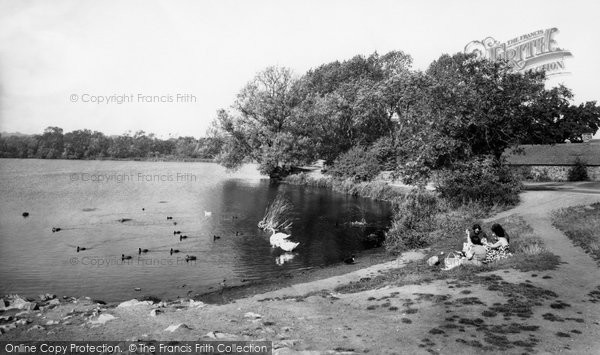 A local saying from Leicestershire linked with pancakes derives from Groby Pool, four miles north-west of Leicester. Once it was larger, but its 40 acres qualified the pool as the largest sheet of water in the county until the 19th century, hence the Leicestershire saying ‘to thatch Groby Pool with pancakes’, which indicates any impossible undertaking.