20th May each year is designated World Bee Day, which was introduced by the UN general assembly in 2017 with the aim of raising public awareness about the importance of bees and their significance in providing for the needs of humanity. Bees provide the pollination of almost three quarters of all the plants that produce 90% of the world’s food and they play a vital role in the ecosystem, helping to preserve a healthy environment and maintain biodiversity. The health of bees is taken as a prime indicator of the state of our natural world, but sadly bees are increasingly endangered and we should all care enough about them to do something to keep these wonderful little creatures happy and healthy. Bees need lots of food – it’s estimated that bees must gather nectar from two million flowers to make one pound of honey. It is crucial that bees have access to plants rich in pollen and nectar, and May is the perfect time to help with this.

For information about what you can do to help in your own garden, see the section ‘Gardening for Bees’ on the website of the British Beekeepers Association: https://www.bbka.org.uk/gardening-for-bees

Why not use some honey to make Brown Bread and Honey Ice Cream (from A Taste of the South East), or to spread on Derbyshire Oatcakes (from A Taste of the East Midlands) – view these and other recipes taken from our Taste of Britain range of books of traditional and regional British recipes.

To celebrate World Bee Day we bring you this selection of vintage photographs from The Francis Frith Collection around the theme of beehives! 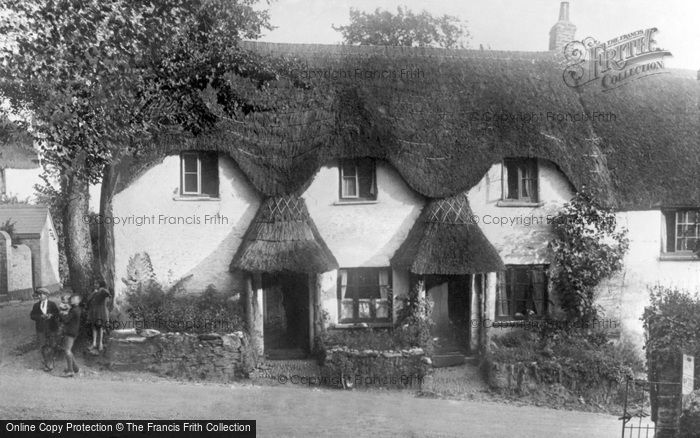 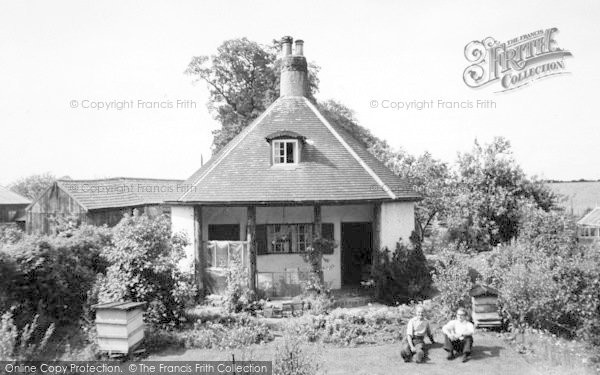 ‘I will arise and go now, and go to Innisfree,
And a small cabin build there, of clay and wattles made:
Nine bean-rows will I have there, a hive for the honey-bee,
And live alone in the bee-loud glade.’
(From ‘The Lake Isle of Innisfree’, W B Yeats, 1865-1939)

Note the beehives in the garden in this 1960s’ view of the quaint and unusual Round House that stands by the road between Seaton and Hornsea in East Yorkshire. 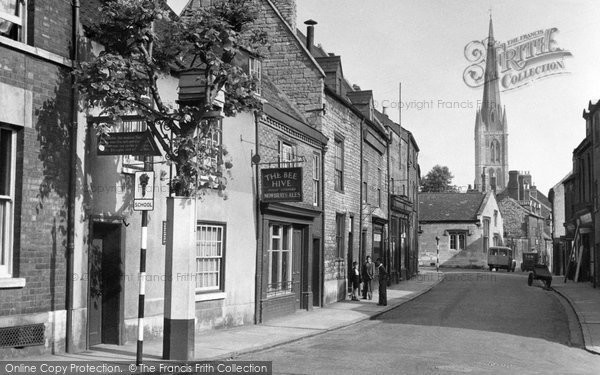 This view looking north along Castlegate in Grantham shows the Bee Hive Inn on the left. Perched in the tree outside the inn is one of the most famous and unusual sights in the town, the ‘living sign’ of a real and genuine bee hive set in the tree, which is still there, complete with a resident colony of honey bees. The pub itself is of great antiquity and there has been a bee hive in a tree there since the early 1700s, although not the same one. The short poem on the sign attached to the wall of the pub reads:

Stop Traveller this wondrous sign explore,
And say when thou hast viewed it o’er and o’er,
Grantham now two rarities are thine,
A lofty Steeple and a living sign. 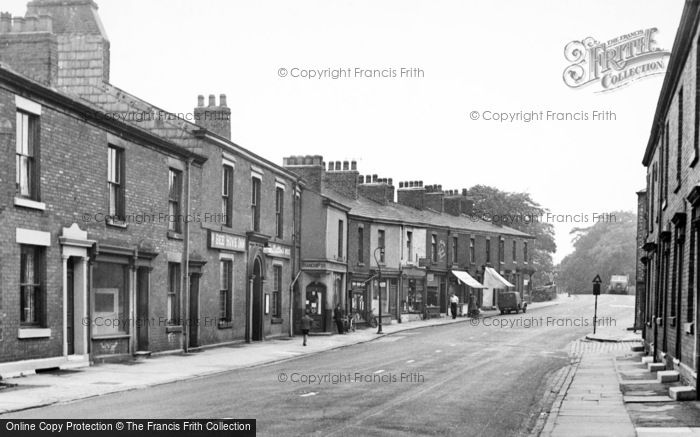 Now a suburb of Blackburn, Cherry Tree in Lancashire was originally developed as an industrial village for the two mills, Bank Mill and Cherry Tree Mill, which were built by the Leeds & Liverpool Canal. The Bee Hive Inn seen on the left of this view was a tied house for Dutton’s Blackburn Brewery when this photograph was taken around 1960. It is still a popular local hostelry, located on Preston Old Road. 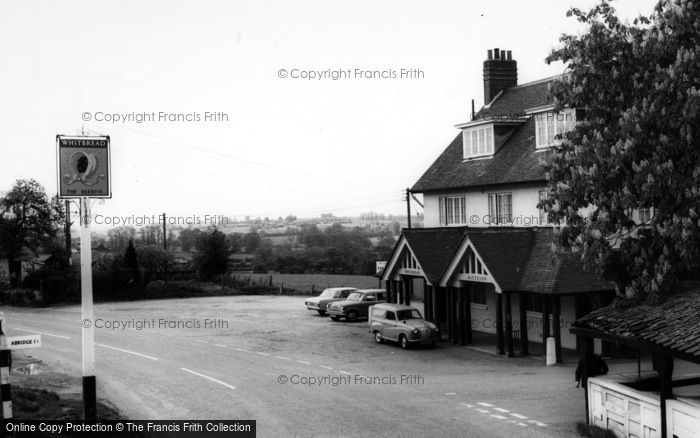 Local farm workers were once the main customers at the Beehive public house at Lambourne End in Essex, on the edge of Hainault Forest near Chigwell Row. The pub was rebuilt in its present form in 1928. In more recent times the pub was known as the ‘Camelot’, and it is currently (2020) called the ‘Miller & Carter’. 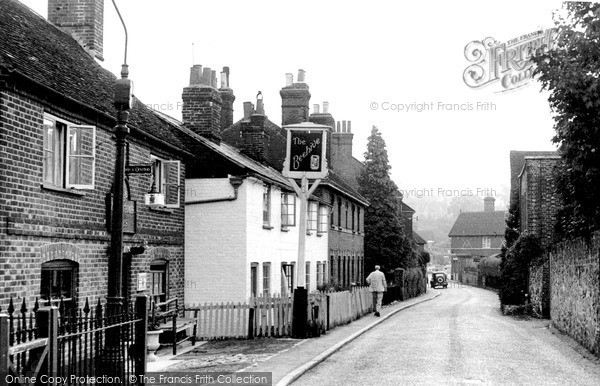 The village of Riverhead is now part of the urban area of Sevenoaks in Kent. The Beehive Inn seen here c1950 is no longer in business, and the building is now a private house. 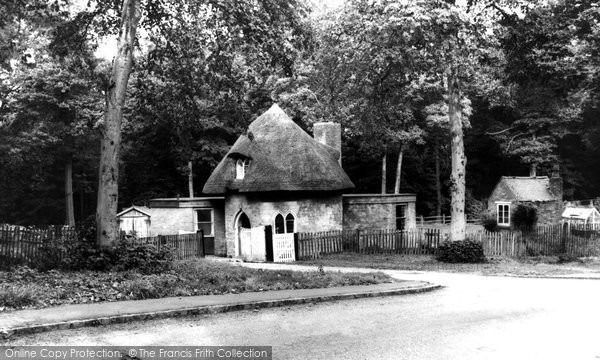 This delightful octagonal thatched-roofed cottage, known as Bee Hive Cottage, dates from the early 19th century and was built as a lodge cottage for Merevale Hall at Atherstone in Warwickshire, home of the Dugdale family. About 15 other picturesque cottages on the Dugdale Estate were demolished in the 20th century, but Bee Hive Cottage was saved from threat of demolition in 1961 after architectural alterations were made that satisfied the sanitary inspector from Atherstone Rural District Council with regard to its low ceiling heights. It is now protected as a Grade II listed building. 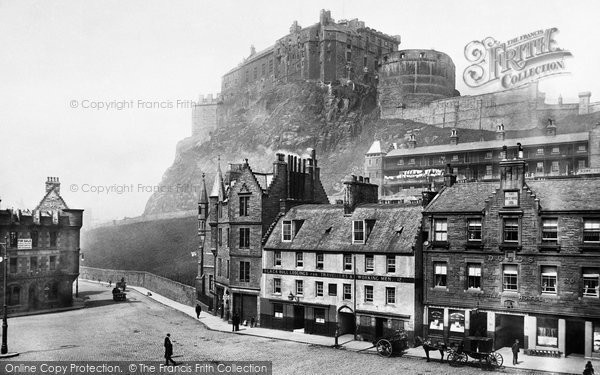 On the right of this view of Edinburgh’s Grassmarket is the Bee Hive Hotel, while above it the city’s historic fortress dominates the skyline from its position on the Castle Rock. This photograph gives an idea of the imposing bulk of the great Half-Moon Battery which was added to the castle’s defences in the late 16th century. Behind the battery are the Royal Palace and the early-16th-century Great Hall. There has been a royal castle on the rock since at least the 12th century, and the site continued to be a royal residence until 1633.

Photo: Edinburgh, The Castle From The Grassmarket 1897.