A Memory of Abridge.

This photo appears at the back of Essex Living Memories (pages 112 - 113) and in "I Remember When ... Memories of Britain (page 134)".  The two ladies in the foreground with the prams appear familiar - The lady on the left may be Mrs Peagram with her son Colin in the pram, the lady on the right could be Mrs Hockley with her son, Kenneth.  The couple with the child in the pushchair outside the butchers looks like and could actually be my parents and me.  They might have just stepped off the No.10 bus, the back of which you can see parked by the Blue Boar Pub on the left.  I believe, the No.10 bus route at peak times went all the way to Algate East, non-peak time buses went to Stratford, Leyton or Leytonstone.  At the time this photo would have been taken we weren't yet living in the village, but my parents formed the Leyton Self-Build Group which started with 100 members and was left with six committed members, who built their own houses in the semi-detached style opposite Raven's Garage in London Road.  My father at this time would have been spending all his spare time in the village building the houses, with the five other men and my grandfather who was a bricklayer by trade. They also had help from Frank Reeves who was a local drainage expert.

To the right of the picture behind the women with prams is Brighty's Electrical, beyond that the weatherboard Post Office (recently demolished - it was not a listed building), the butcher's shop and a big chestnut tree which was one of several trees in the grounds of Dr Hancock-Ellis's house, built in the Georgian era, but later damaged by fire, then demolished to make way for a cul-de-sac.  The old van parked in the Market Place possibly belonged to Trixxie who raised poultry up at a farm in Lambourne (Mum would order her Christmas Capon from him). He was brother to Six Foot, a very small man who always wore a flat cloth cap and lived half way up Hoe Lane.  All the children liked Six Foot because he was the same size as them and always had a "hello" and a smile for them when they passed on their way to school.  Six Foot kept a very narrow shop (located behind the van) where large quantities of fresh hen's eggs and blue duck eggs were sold, and fresh tea was served from an urn.  There was just about enough room for the counter on the left, a small alleyway for the customers, and on the right, a stool or two and a ledge to put a plate and cup on.  I think you could buy a sandwich or a biscuit.

Next to Six Foot's tiny shop was Bertie Brighty's shop which had a much larger cafe, called the Copper Kettle Cafe, at the back.  You would go down steps to get into these old buildings.  On the left as you entered was Mr Brighty's sweet counter.  He also had a machine that roasted cashews and peanuts.  I remember the old riding spur (mentioned by Mr Walker) which Mr Brighty had hanging from a timber beam in the ceiling.  He also had Roman coins he would show you if you asked, which he found in the back garden.  Mr Brighty was a jolly chappy. a shortish, slightly tubby, dark haired fellow, and I think it may have been his wife who smoked the pipe.  She took care of the other side of the shop which was the smoker's side.  She also served drinks, fizzy red Tizer "the Appetizer", strong tea, and sandwiches in the Copper Kettle Cafe, accessed via a passageway to the back room (surprisingly light and airey) behind the shop.  Brighty's cafe was popular with cycling clubs.  On a sunny summer Sunday you could count bicycles parked six deep on top of each other, outside the cafe.  Mr Brighty's dad was a cycle club member, and was a keen, fit cyclist well into his 80s.  He was a tall, slim old gent with a Roman nose, a mostly bald head, a small moustache, and always wore brown tweed plus fours and a matching belted tweed jacket (a style popular in the 1920's) when riding his bike.

The Bayles's shops: there was a top Bayles and a bottom Bayles.  Top Bayles was a grocery shop (just out of sight to the right of the photo) run by Mr Bayles.  He had been working there since he was a lad.  He was very kind to the children and gave them biscuits because he sold his biscuits loose, which inevitably got broken, from many glass topped tins lined up, displaying their contents, along the front of the counter, so he always had a few broken ones to spare. There was a bacon slicer at the back of the shop.  Bottom Bayles, located beyond the Blue Boar pub at the top of Silver Street, was run by Mr Bayles' two sisters.  They sold haberdashery, linen, cosmetics, toys, bric-a-brac etc.  I remember buying a brown lead pony from the toy section which, even at that time, seemed a bit antiquated because the Post Office, on the other side of the road, sold (the much safer) plastic farm animals from a glass case by the door.  I wonder how long that brown lead pony had been in their stock room.

This memory is written about Abridge, the Village c1960 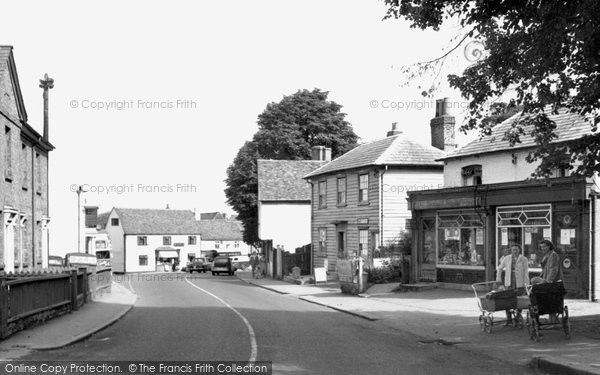 Ah, reading this has brought a little tear to my eye, I remember my old granddad mentioning 6 foot! and I thought he was joking all those years ago. I lived in Abridge at my grandparents house for the first 3 years of my life in the early 70's although they lived there from the 50's until the early 90's in the London Road cottages near the big house with the Peacocks, who's ghostly crowing used to scare the life out of me as a little one!
By abridgeboy on Sun Jan 4th 2015, at 1:07 am
Contact User
Report
I'm married to the daughter of Mrs PAGRAM(not Peagram) and on close study, we don't believe the lady on the left is her. Also, Colin was born in 1954 so it's highly unlikely to be him in the pram.
By aycee52 on Sun Aug 16th 2015, at 4:10 pm
Contact User
Report
I too have very fond memories of Abridge and one or the other of my bikes would often be among those outside the cafe. I lived on the High Road at Woodford Bridge where the No.10 bus would terminate except that every 3rd. or 4th would be a 10a that would continue through Chigwell and on to Abridge "Blue Boar" then return journey was often as far as Victoria Station. My Father was a bus driver on the 25 and 25b, Route that also terminated at Victoria. Oh yes, those were the days.
Norman
By norbet on Wed Mar 9th 2016, at 5:33 pm
Contact User
Report