A Memory of Acle.

I have many happy memories of this school, I went there when it first opened, we were so lucky, the school had all modern equipment and really nice classrooms, and a brilliant Headmaster, Mr Phillips, he was very strict but fair, as were most of the teachers, Miss Leadbetter, Mr Flowerdew,Mr Powell, Miss Smith, Mrs Tilbrook, Mr Priest - these are the names that I can remember. I became a Prefect in my final years and loved every minute. Still have photos of school and staff and my reports together with the opening brochure that was issued. Recently revisited this place as my granddaughter is a Teaching Assistant there, she was also a pupil and the visit was very emotional as her classroom was also mine, although different seats, she sat at the front and I in the middle of the same line, how spooky is that! Mr Phillips was a lovely gentleman and always remembered everyone's name, which I thought was amazing with so many pupils. I also remember that everyone respected him due to the fact that he was strict and we didn't seem to have any problem pupils. I know that as soon as the Headmaster was in sight everyone listened to him and did as he asked, and if you did misbehaved you stood outside the classroom door and waited to be called into his office. Those were the days, I cried when I left.

This memory is written about Acle, the Secondary Modern School c1965 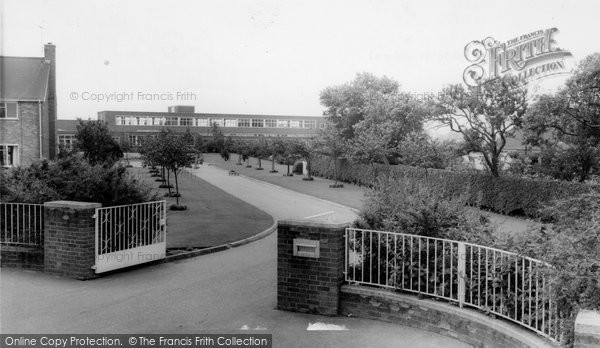 Readidng Mary King's school memories made me think about my time at the school too. I started at Acle Comprehensive in 1973 ( I'm sure it was a Comp at that time and became a 'High School' in my final year) my last year was 1978 after which I went to Gt. Yarmouth College. Mr Philips was still there when I left and I had great respect for him.. he was indeed a brilliant Headmaster and certainly did know everyone's first name - I liked him a great deal - his readings during the morning assembly were always from the Bible and I remember he had a favourite phrase to keep us in line: "Woe betide anyone who...... " and I certainly heeded it. Other teachers I remember were Mr Priest the Maths teacher who used to bring his dog to work sometimes it was a Great Pyrenees Mountain dog.... there was Miss Smith who taught Biology, Mr Keenan the history teacher, Mr Bidwell the rural studies teacher...Mr Watson who taught english, Miss Read ( though I'm pretty sure she was married but we always called her 'Miss who taught rural science/studies too ) then Miss Cook ( or Mrs? ) who taught cookery and domestic science. I can't remember the Woodwork teacher's name but we always called him Quincy for some reason - I never understood why. They built the 'new' science block during the summer holidays in about 1977 and it was a fantastic new addition to our lives.. I expect it's quite dated now. In 1977, just before we broke up for the summer hols, a big group of 5th year boys set about beating up the a lot of us 4th year boys.. a few were seriously injured and a couple of 5th years got expelled for it. I remember Mr Bidwell always had Ford Capri's and we all drooled over his new cars.. I remember one blue one and then next year a red one.. Mr Keenen the history teacher was my favourite teacher, he was Irish and always called me Errol ( after Errol Flynn ) not everyone got the joke but I liked him for it - it made me laugh. During the summer of 1977 some of us had a rural studies summer school at Holt Hall which was my first time away from home without my parents supervision.. it was a great experience. Sadly I have no photos of my time at Acle - I hope maybe someone from my class will see this and add some, if they have some.. mostly I really enjoyed my years at Acle and my memories are surprisingly positive! Who'd have though??
By David Flynn on Sat Aug 13th 2022, at 9:39 am
Contact User
Report