My First Home. - a Memory of Bardsea.

I lived at the Ship with my father George Simpson, mother Joan, sister Mary and grandfather Joseph Simpson. My grandfather had married Elizabeth Robinson whose family had run the pub and farmed the land since Thomas Robinson in 1672. My Great Grandfather George Robinson, who was the tenant farmer for Mr.Hocking, would have passed the tenancy on to his son John but Mr. Hocking gave it to Joseph instead as he was the better farmer.

I was very ill just after being born and so was christened in the front parlour just to make sure. My father followed Joseph as the publican and also farmed the land associated with the farm buildings which were behind the public house. The white sheet that can be seen in the picture beside the telephone post shaded milk churns which were placed there for collection.

My earliest recollection of living at the Ship was in 1946 when at the age of three I lost my right index finger in a piece of farm machinery. I can still see the shocked faces of the German prisoners of war, waiting at the bottom of the granary steps for their transport back to camp, ( they were literally "farmed out" to work during the day), as I was carried screaming to my mother. 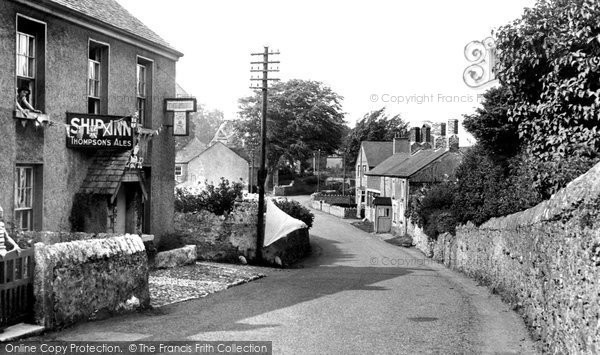 Bardsea, Village and The Ship Inn 1953