Barton Swing Bridges Road And Canal - a Memory of Barton Upon Irwell.

This picture shows both the Barton road bridge and the swing bridge carrying the
Bridgewater Canal across the Manchester Ship Canal in the 'open' position.

I used to visit this site as a child when there were still barges operating on the
Bridgewater. It is a fascinating and unique example of Victorian engineering.

Today, the site is a wilderness when it should be a tourist attraction! The owners
the Peel Group (formerly Peel Holdings) have absolutely no sense of the history of
this site and should be thoroughly ashamed of themselves for allowing this historic
site to become what is little more than an overgrown litter-strewn jungle!

The Peel Groups smug, self-congratulatory and complacent web-site makes the
claim that they are 'Positively impacting people's lives'. Well, their neglect of this historic
site is negatively impacting this persons life! The subsidiary Peel Land & Property
website makes much of the awarding of a Transport Trust 'Red Wheel' to this site.
What a joke! I will be contacting the Transport Trust to see if they have any procedures
for un-awarding their 'Red Wheels'.

The Peel Group can't claim they don't know - their headquarters are in the Trafford
Centre about a mile away.

Wed Jun 27th 2018, at 9:42 am
Roger Hare commented:
Correct, there is no money in Victorian engineering. Or is there, the Anderton Lift seems
to be doing OK.

However, here is the relevant part of the text of a message sent to the Transport Trust, a
surely misguided charity which made an award to the Peel Group for their 'stewardship' of
this historic site:

I see that in 2016, your organisation awarded a 'Red Wheel' to this site.

This is a little strange, because I had visited the site in summer 2016 (for the first
time in 50 years), and it was an overgrown, litter-strewn jungle.

Intrigued by the idea of this neglected site having received any sort of award, I
visited the site again, last Sunday. It was still an overgrown, litter-strewn jungle.
I took a pair of binoculars with me and was able to study the structures on the
island site in the middle of the Ship Canal, and on the aqueduct carrying the
Bridgewater Canal across the Ship Canal. All paintwork was flaking and peeling,
and underlying metalwork was rusting. There were plants and weeds growing all
over the buildings and structures, including the aqueduct itself. Overall, the
whole site was clearly in an advanced state of neglect. The building which could
become a visitor centre on what is surely a historic site was in a state of some
disrepair, with all its windows bricked up.

Perhaps you could tell me exactly what The Peel Group did (and are doing) to
justify this award? It's clear to me that they are dong nothing to maintain the
site at the moment. The Peel Group have a very bad reputation locally for looking
after any of their property which could be regarded as 'historic' - unless there is
some money in it for them!

Perhaps you should consider the possibility of 'unawarding' your Red Wheels
when they have clearly been awarded to an undeserving organisation or business? 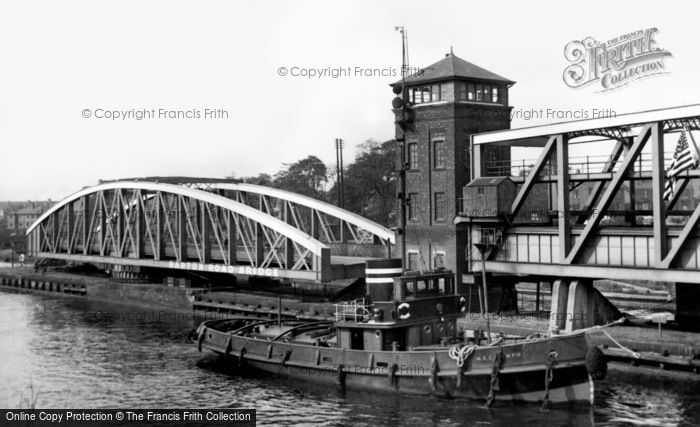 Barton upon Irwell, Tug going down the Ship Canal c1955