I used to live up the Station Road, No. 3 Broome Close, about 150yds past the post office on the left. Lord Plymouth estates built 2 new houses in the early 60's, we moved from the stable flats in Oakley Park and Mr & Mrs Price moved into No. 4; he was the estate's carpenter.
Auntie (Miss Price) as we called her, lived in the old thatched cottage just past the Post Office. I remember the smell of the paraffin lamps and heaters she used in her cottage.
Miss Cook (Head Teacher) and Miss Davis taught the local pupils at Bromfield C of E School, one class for infants, one for juniors.
Mrs Owen used to run the village Post Office, and I think Mr Owen was a Signalman at the station signal-box on the Shrewsbury to Hereford line at the old railway station in Bromfield (this station did open up, I think, for passengers on race days, Wednesdays & Thursdays on 2 or 3 times a year).
I remember Bromfield Sand & Gravel starting up for business. There was two gentlemen (Tom & Ted) who lodged with us for a while, testing and checking out the ground for extracting gravel.
The pathway to the River Onny in the picture, I think was used as a crossing for cattle to and from milking etc, also a footbridge was built in the 60's on the side of the A49 road bridge. The A49 trunk road was a dangerous, narrow, winding road through Bromfield, before a bypass was built after I left Bromfield in 1967 moving to Wellington. 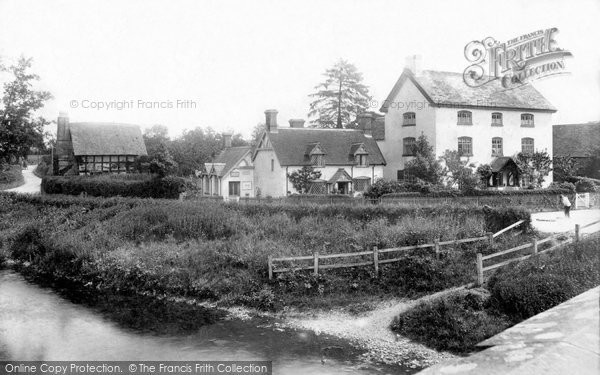